So i have my frame pretty much assembled but no where in the instructions did it tell me when and where to put the 2 screws into the rails for the limit switches.i pulled off the left front plate and got that one installed but to put the one on the Xaxis i would need to disassemble the entire left side of my machine along with the belting, etc. Anyone got any ideas and this needs to be fixed in the instructions. Also from all i have seen on the forum about the limit switches are they really that useful and do i need them at all? Most if not all of my projects will be with easel and maybe cut2d. Thanks for the help in advance. Kinda frustrated at this point but still working through it all.

You must have a 1kmm unit because my 500mm showed them in those instructions.

They are not used as limits, but, for homing. I never home, so, I ended up not needing them.

should be a section in the instructions on installing the screws for the limit switches at the end of the wasteboard instructions.

you shouldnt have to undo the rails. you should have gotten press in insert nuts

Yeah, adding the stops for the homing/limit switches should be pretty easy. The nuts they give you for that step are special in that they can be inserted into the side of the rail, and don’t need to be slid in from the end. Using the switches to home your device is helpful, so I’d say it’s worth getting it sorted out, just make sure you’re using the right nuts for this step and it should be easy

@PaulKinlaw - You have the 1K, I had the same problem. I figured out through process of elimination (of parts) that you use the 2 long bolts and the 2 post-insertion nuts that were separate from the other parts to create a point against which the 2 homing switches hit. The post-insertion nuts can be added after it is together, thus the name. Just push them in carefully (insert with the joint of the springs and the nut going in first) push it so that it lays flat. Once in, if needed, use a bolt to make it lay flat against the rail in the groove. Then you can slide them to the spot needed and insert a long bolt in until it bottoms out so the screw/bolt won’t slide anymore. It’s nice because you can adjust the limit/home if needed, but I didn’t see any instructions either. I will post pics when I get home if needed.

Thanks to everyone that responded. I just figured it out when i was looking at them a little closer. Sorry for that. ITs just REALLY hot here today in my garage and trying to get this thing assembled so i can calibrate it and get my first cut in. 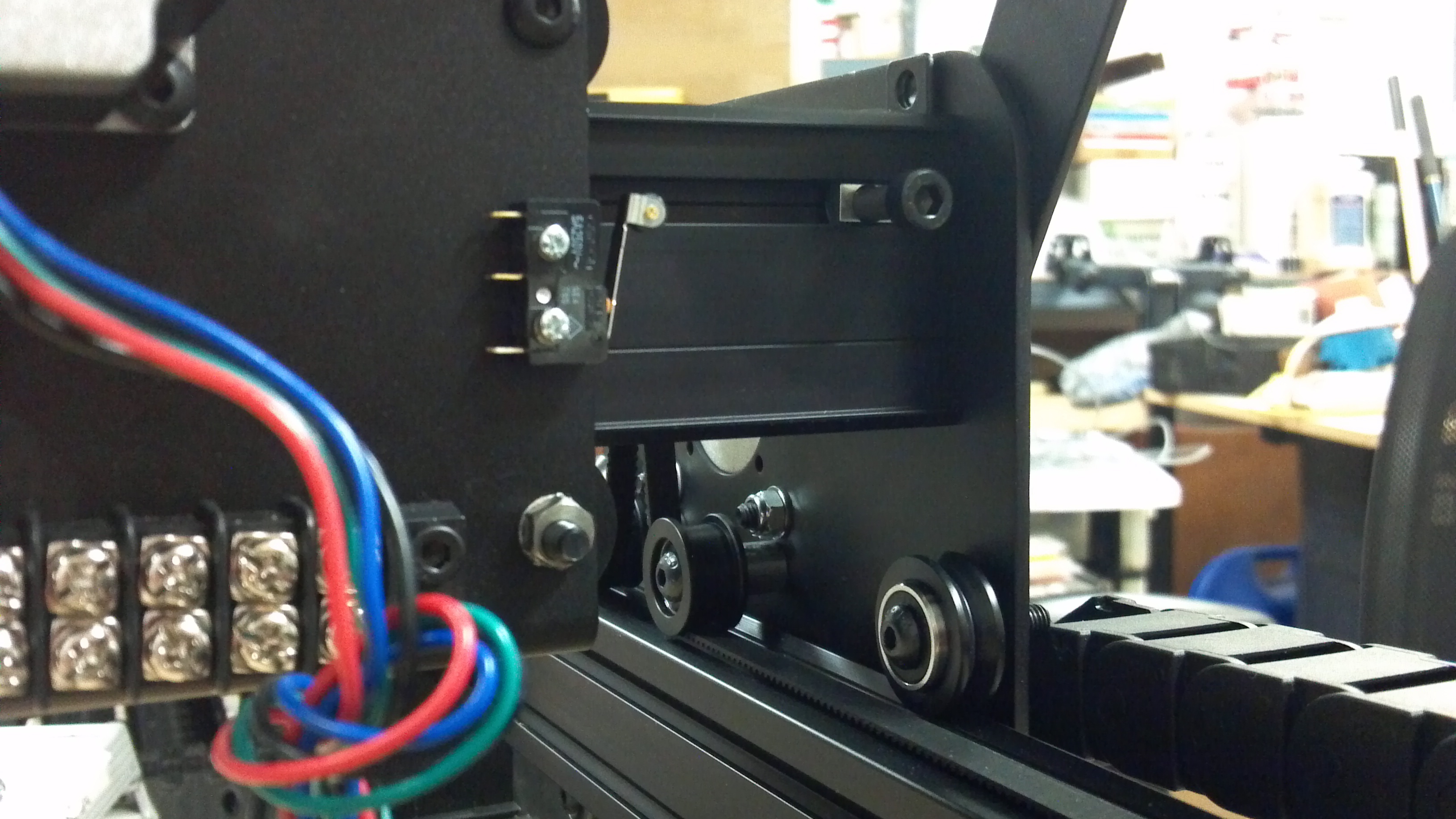 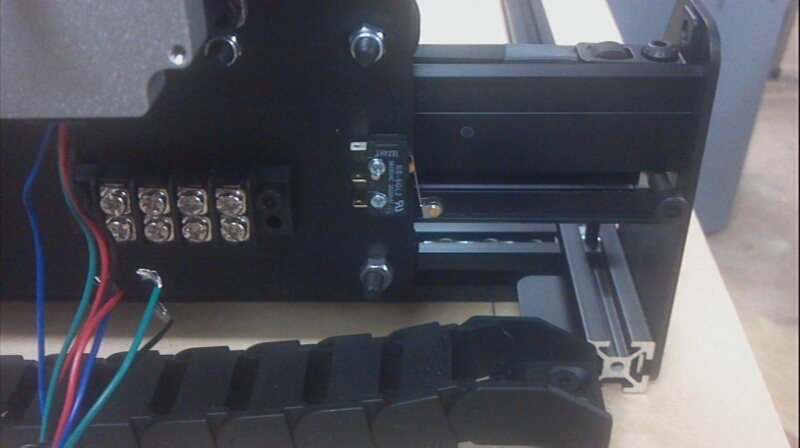 Why is heck is this still not in the directions for the 1000mm version?

The steps for installing the actuators for the limit switches are independent of the size of your kit, and can be found on this page under Step 14:

I think a clearer set of instructions on actually installing the switches, routing the wiring, etc (just like the directions for wiring the steppers, routing the cables, etc) would have been nice. It completely skips installing the actual switches and any sort of routing of wires.

And what size bolts/nuts are used on the switches?

I know I’m raising this from the dead, but I’m getting ready to start the electronics portion of the assembly now. I was sitting there looking at my machine late last night and trying to figure out why 2 of my limit switches didn’t seem like they would contact anything. So I came looking, and fortunately I found this thread. I’ve gotta agree with @Sisco. The instructions on the switches aren’t clear at all. It seems to jump around a bit. Burying the actuator installation instructions way down in Step 14 seems illogical at best. Step 14 covers electronics and connecting the wires to said electronics. Attaching a screw and nut to the makerslide just seems a better fit for much earlier when assembling the gantry and y-axis. Just my 2 cents!

This thread answers a question that was nagging at me, and I really appreciate the photos MakerMark posted. I’m supervising a small group of 6th graders who are building “my” machine. They are probably going to finish the machine at our next work session, but it was beginning to wonder how or what was going to trigger the limit switches. I was looking for some sort of bumper block to be attached to the end plates.

It would make sense to me to include an item in the instructions entitled “Install limit switch stops for X [Y] Axis”. In sequence, it would make the most sense to do this with pre-assembly insertion nuts just before the addition of the left hand Y Axis plate on the X rail and just before the addition of the front end plate on the left hand Y rail. Or, since the post insertion nuts are presumably part of a standardized “limit switch kit”, installing the stops just after addition of the belts would also make sense.

Still, I now see that there are several pictures in the assembly instructions that at least show the bolts, so I’d like to think I would have figured it out eventually.

I understand that the limit switches are an optional accessory, designed to be added “later”, or perhaps “never” in the construction sequence, which explains why they are installed with post assembly insertion nuts. But for customers who purchase the limit switches as part of the entire “package”, it would make more sense (to me) to install them with pre-assembly insertion nuts, earlier in the process.

I thought before that I place one on each left and right plates and x cariage one, am I wrong?

The Z axis generally only gets 1 switch that is configured as home at the top of the Z travel and as Z+ limit. wired from the Z pin on the controller to the switch and back to ground.

You then go into you control software and tell it what pin numbers are for X,Y and Z and what direction for homing or referencing the axis.

When you start you control sofware up it does not know where the carrage is at in the machine world. Homing the 3 axis then informs the software where machine 0,0,0 is and then the homing goes to sleep.

Now if you move an axis and trip a switch by moving to far. The software will stop movement and not move again until you reset and move off the switch. When a limit switch is tripped Homing is lost and the machine has to be homed again.

Generally speaking the Z axis does not have a negative limit switch because by the time the Z axis hits the switch it generally will of destroyed the tool already.

Just a small addition. For this configuration you also have to set up Grbl to know that you changed from normally open to normally closed switches. Without this change your system would always be seen as limit tripped. (Default for Inventables Grbl is high equals not tripped and low equals tripped.)

Another small difference is that you would be pulling current (very small) through the pull-up resistor in the Arduino in the not tripped case. With normally open switches you only pull this current when tripped.

Thanks for the info, that finally cleared that question. I have a 1000mm x-carve and they still haven’t updated the instructions. They need some professional procedure writer help, there are a lot of holes in the current 1000 mm instructions.