Any updates? How’d it go?

not so good but I don’t mind its a leaning curve. so few questions I definitely think the feed speed was to fast. also. don’t think my bit chose was correct. I used a 1/8 up cut 3 flute. it has a purple tag on it. also the lettering is very fine is some spots I think the 1/8" is to big. how can I make the letters thicker in easel? take a look see what you think. 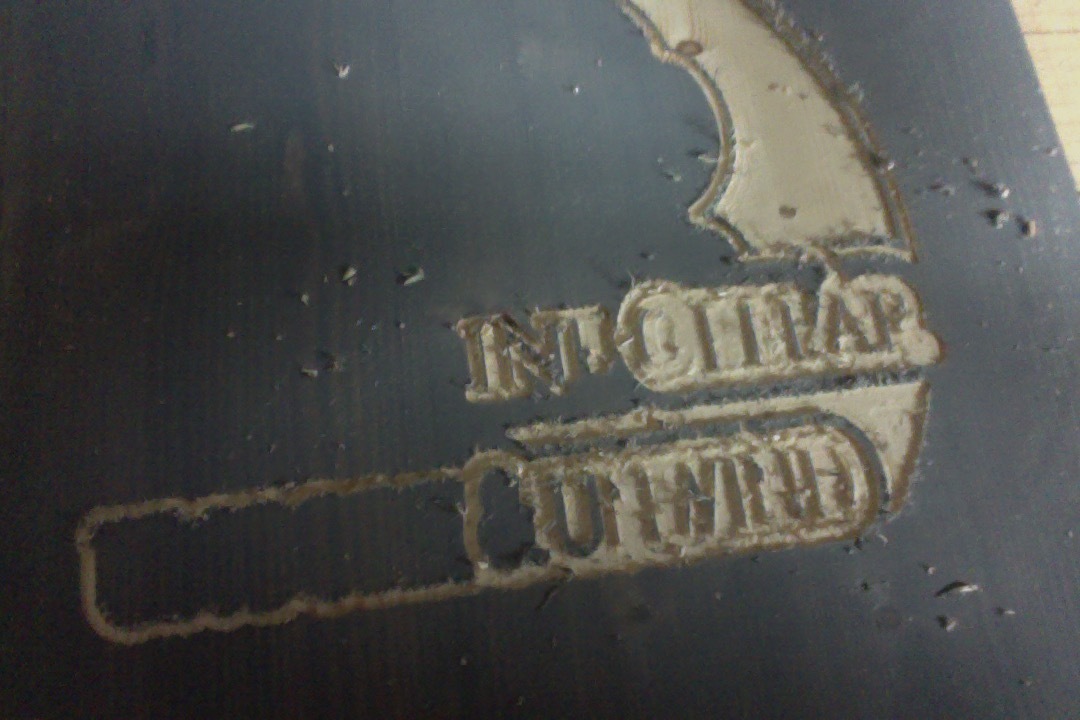 as far as easel design itself, i’m not familiar with.

it looks like the major areas smoothed out fine, but hard to tell… did it seem like it was straining or having any issues? if not, I think you will be fine with a good roughing strategy then working out the profiles. I’ll explain later in this.

some other questions first.
did you measure your tool (bit)? a technique to do this more accurately is to cut a line in the board and measure the cut. this also will help avoid nicking your tool with calipers.

3 flute upcut… i would use a 2 flute down or up, better chip clearance I would think.

this is pine? if so, it’s soft, so when getting to smaller parts, it can easily start chipping off, tiny step overs will be needed for that, but I would thicken it. I looked at it again, and checked if there was an obvious way to thicken text and it doesn’t appear so… looks like you have to change the font to do that. Hopefully someone will know of a better way. An alternative approach where you will have an easier time is to use inkscape (free), illustrator, or affinity designer to create this. then you will have way more control over the curves and be able to import it into easel.

if there were problems with chatter or other issues that indicate the feedrate was too much, did you run test? I can’t stress this one enough… grab some scrap of the same material and see what it can handle. for the thin areas, I would try a sample of it (2"x2") and see how it goes.

For this design, looking at it again, an approach I would take, would be to hog out the large pocketed areas first leaving around .5-1" around the letters… in other words, dont even get close to where they are. Use a .25 or even a 1.25 clearing tool (link).
be sure to leave an offset for a finishing pass. In other words, don’t cut all the way to the final positions.

next, change the tool, zero the height but keep your x/y the same. then run the paths to profile the letters and edges with the smaller finishing tool.

as far as how to run this job with easel and setup these different stages, I’m not sure. I would imagine it would be easiest to export two svg files with the roughing/clearing pass in one, then the detailed pass with the other.

have you considered vcarving, or layering? for this sign I think layering could be pretty cool. Especially using some spacers to give a little distance between the background and foreground. The overall process would go a bit quicker also.

if its handling well… just run a roughing pass first with a larger endmill or a clearing cutter, then on the edges, do a profiling pass with a small step over with the 1/8th . Test a smaller sample first!!

however, don’t they have a mac version of fusion 360 for it?

there is totally a version of fusion for mac: I use it a lot for 3d.

I downloaded the trial. having a hard time. figuring out the cam part but will get it in time

You don’t even need the trial. If you declare you are a “hobbyist”, Fusion is free for a year and renewable each year.

Look over their tutorials. Excellent quality.

the trick for me was to orient the part on the screen the same way it would be oriented in my machine.
then define the stock, so it looks like the stock you are using.
then start adding tool paths, one at a time, and make sure the tool orientation matches the x-carve.