Machine acting weird (anyone else have this problem)

I just made a simple cutting board on easel. All my setting were correct. Board was .75 thick. I put it .73(just in case) I simulated cut and said 1 hour and 35 mins. I even switched my bit to .25. Thank god I was standing near. Cut only took 50 mins and used all recommendations for cutting soft maple.

Is the estimated time off that much for everyone?? I’ve done this multiple times before and my usual cuts were about 50 mins

See even here it’s ahead of schedule. Only 50% and it was done, but still wanted to cut through the wasteboard 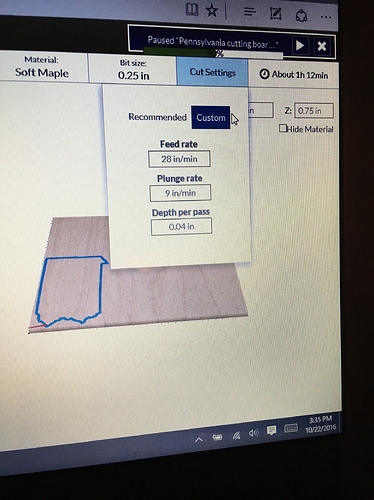 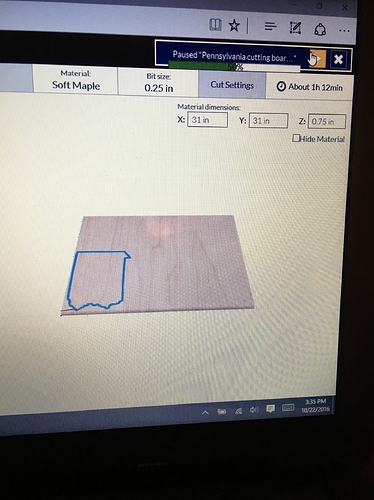 Updated tool paths made that much of a difference??

Probably not. Was just a guess

It takes forever. Just change your Depth Per Pass number to half of the bit size. That is thumb of rule. Let say you’re using 0.25" bit, Depth per pass could be 0.125 at the first projects. When you master and make your machine rigid enough, you can increase your speed and depth slightly.
I cut Plywood with 0.25" bit on rate of .25" depth, 100 Ipm. Router speed 3.

Ok thank you. I’m just wondering why my estimated time doesn’t match up with my cut settings though?

Did you import an SVG into Easel?
Your SVG probably has two outlines too it.
Easel might be cutting it out “twice”.
Maybe zoom in on Easel?
Do you mind sharing your Easel project?

Honestly that exactly what it was and stopping at 50%. It was a double line(noob mistake). I also don’t know how to share the easel project

def did not make a single line outline pretty sure, because after it started on the outside border after

Well now you know that was the cause!
BTW For the future, you can zoom in, select the object, click “edit points”, and see that there are two paths: 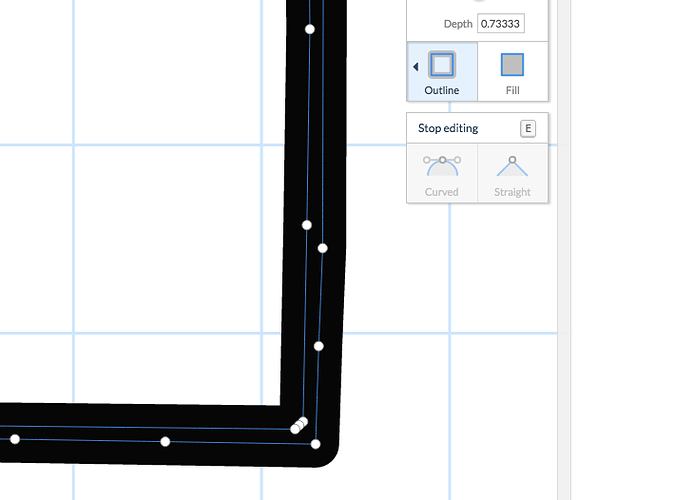 Screen Shot 2016-10-23 at 10.39.35 AM.png711×526 23.3 KB
If you are patient enough, you can even use Easel to select a point, and delete it. Generally, Easel will automatically select the next node on the path, so keep pressing delete and you can probably delete the extra path without having to re-import.
Update - I just did that - took 30 seconds!
Now there is just one path for Easel to follow!
Problems with Inkscape
SeanNaylor October 24, 2016, 2:19am #13

Thanks!! Works amazing now!!! This tip def helped with other designs