So I’ve been using my X-Carve with Easel for about a week now and I’m starting to learn how to use this awesome machine. After a job completes, the machine returns to the home position – in my case, I usually start it at the bottom left corner of the piece that I’m cutting.

Is there a way to programatically move the machine that doesn’t involve hitting “carve”, using the movement keys, and then cancelling? I would rather do that than move it manually as manual movement seems to introduce errors on the Y-axis.

That is the only way to jog the machine right now in Easel. How would you prefer it to work?

Would be cool to have a pop-out panel for that in the main window. Also, something to kill the motors.

I think a dialog under “machine” where you could jog X,Y,Z would be a nice feature. Perhaps set machine defaults. Bed size, etc. Perhaps custom material settings. Sorry, just observations from using the tool briefly.

I concur. I think it would be great to have a manual machine controls dialog somewhere with pretty much the same axis controls as you get when you set up a Carve operation.

Minor changes could include:
• Spindle on/off
Useful for setting the machine up with a sanding drum from a Dremel kit for doing manual cleanup of pieces, like tab sprue.

• Hold buttons to repeat movement
Press once for indicated step interval. Hold to jog the machine at that interval.

Yes, this. Please.
I just broke (another) limit switch by entering a bad command in machine inspector.
I also learned that the limit switches aren’t active in MI, and the Z axis went the opposite way I expected.

I REALLY want a machine control panel that will let me do what I want, in a reasonably safe way.
Some things the panel should offer:

This would be a great feature . Just have it work like the universal g code sender command . You can move the router away from your work piece , to change the bit then hit return to zero .

I think it would be great if you could use an xbox controller as a pendant, xpadder as a keyboard controller is fantastic if it would work with Easel wow think of the possibilities.

I just broke (another) limit switch by entering a bad command in machine inspector. I also learned that the limit switches aren’t active in MI, and the Z axis went the opposite way I expected.

Just happened to read this and if this is old data and you have solved your issues — just disregard.

These are configuration issues. Your machine can take care of these problems below the Easel level. Grbl has settings to help eliminate these problems. Use homing and soft limits.

For some of your positioning problems, look into the G28 and G28.1 G-code commands.

Looking at things from the grbl perspective, the term "limit switch" only applies for the X-carve if you use hard limits ($21=1) . Looking at things from the grbl perspective, all other cases for the X-carve the switches are "homing switches". Homing switches allow soft limits ($20=1) to work. For this case the "limits" depend on having done the homing cycle and on the low end the limits are 0,0,0 and the limits on the high end are set by $130, $131, and $132. After the homing sequence the s…

This would be a great option as well as including keyboard shortcuts for each action to allow the use of a programmable hotkey pendant.

I just finished my machine build, and did my first cut today. I’ve been 3d printing for years now, and any of the slicer software I use gives me easy jog controls for the toolhead. Easel is a great intro into the CAD/CAM side of things, but my first question was: How can I jog the toolhead?

I’ve attached a pic of Simplify3D’s (my favorite 3d printer slicer) ‘machine control panel’, to show off the features I’m used to: Mainly jog controls for xyz, an “emergency stop” button, among other things. 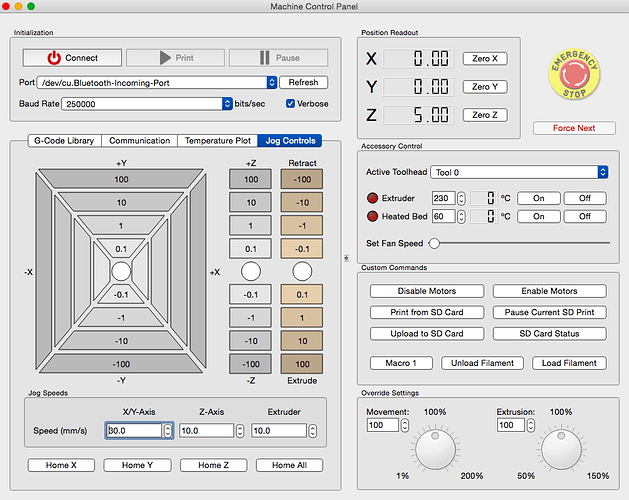 Would be great of Easel could adopt those jog controls!

Well, I don’t know about Easel, but I just did a quick test and you can use the jog function in S3D with the X-carve.

I frequently use S3D to visualize a G-code file to check for errors.

With the appropriate settings I think you could run the X-carve with S3D.

In order to get my test to run I had to de-activate the M105 (read temperature) command embedded in the defualt factory file because grbl doesn’t handle that command.

It seems like forever since I’ve posted on this forum and as I’ve been away for a bit…things seem to have died down significantly. Did everyone stop using the X-Carve?

In any case, I was thinking of adding some arcade style buttons to control X/Y/Z prior to job start and thought, “I should search before I post” and the first thing that popped up was this post I made back in 2015.

SO – I realize there’s a new X-controller and kinds of fancy stuff, but is there a way to add jog controls to the good old original X-Carve? @Zach_Kaplan, are you still around here?

Hi @SeanKeplinger! I’m Jessie, the community manager here at Inventables. Zach does pop in from time to time, but the forum still works the same as before and people will jump in on threads. It might be a little slower right now just due to the holidays.

You’re always more than welcome to reach out to our Customer Success team too if you have questions that you can’t get answered here by other forum members.

is there a way to add jog controls to the good old original X-Carve?

Not without some pretty complex programming and another microcontroller or mapping the buttons to interface with a gui on your computer.

I was considering one of these:

It provides the arcade buttons with a keyboard interface to the PC. The main issue I see is that you have to be in carve mode for it to work. It would be nice to have movement controls outside of sending the job. I suppose a tool like UGS could be used for movement but I don’t think you can have that and Easel up at the same time.

I don’t think you can have that and Easel up at the same time.

Open UGS and connect before you open Easel. You can’t connect with both at the same time, but they can be open.