Made something for my daughters school

So finally found time to do something on my little Chinese cnc machine.

Just need to run it through the planer and then paint it. 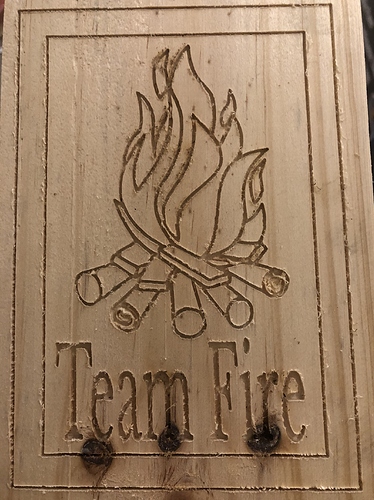 What caused the three spots at the bottom of the text?

It’s knots in the wood. Once it’s all finished off they will be less visible.

Thanks. How deep do you make the planeing cut?

The carve itself is 3mm just going to plane .5mm off to remove the fluffy look.

going to plane .5mm off to remove the fluffy look

Looks good! Are you going to fill it with anything? If so, I’d do that before you plane.

I think the bit I used was a spiral flute. Though I’m not hot on the bit types really. I’ve bought loads but no idea what does what.

That will be interesting to see. Do a video of the process

I actually think the three spot kind of add to the effect.
Nice job.

The melting worked but I completely destroyed it when planing it. The planet took a huge chunk out of the end of it. So I have a new one carving now. Trying with a v bit the carve time is a lot longer though. Trial and error with little success so far but the fun is in the learning and success will come eventually I hope

I’n not surprised by the tear-out. When your initial post popped up in my mailbox, I thought, “Uh-oh. I wouldn’t be running a piece through the planer after routing out that level of detail.” Sanding is a much safer approach, but I doubt you could sand after melting wax into the relief. One approach might be to sand it, blow out the dust, then seal it with poly. You could then add the colored wax, wipe it off the raised sections, then seal it all again with a couple more coats of poly.

I was more due to my lack of pressure than the planer I was running across but the push pads that come with the planer are rubbish and slip on the wood so when the last part was going over the planer the far end tipped up and that caused the destruction to begin and it was then unsavable at that stage. But all is not lost I know the wax option works just need to refine the other areas of my skills to make the final product.

Sounds like you’re using a jointer not a planer. I would have tried a random orbital sander for the fuzzies.