Makerslides and Brackets holes not lining up

It just happened to me this week. It was the front slide. They sent me a replacement maker slide. (because of my impatience I tried to force it to tighten right and in turn had to drill out the bolts.) The new one wasn’t as bad but still an issue. I believe the holes in the endplates are off by just a few thousandths but enough to cause problems.

Well it’s too late now. The machine is together, but I would say 90 of where a Maker slide went into a bracket the holes were misaligned. If I put the top screw in, I wouldn’t be able to get the bottom one in and vice versa. So all I did was file out the top hole until I could just get the screw in, that way I stayed consistent. It wasn’t much only 0.5mm but like Guy said it was JUST enough to keep that second screw from going in.

I had the same issue with my 1000 mm. It was not so bad that it couldn’t be done, but it was bad enough that I had to retap the makerslide because I messed it up trying to get both bolts in straight to engage the thread correctly.

Yep! It looks like they must have gotten a bad batch of brackets of something. You’re right not a big deal, and if this is the biggest hiccup I encounter in this whole process I’ll be very lucky. So far it’s going great.

Perhaps you’re thinking of the Y-axis plates, which do not connect to the makerslide.

For the makerslide, it’s a bit difficult to make that mistake because it would require thinking the makerslide only needs three bolts to fit four holes.

You’re right, they are both connected to makerslide, my mistake. My issue was with the x-axis, so that’s what I was thinking about. The holes in the plate for the makerslide were not on center with the tapped holes in the makerslide. I could get photos, but if it’s just to convince you that I put the x-axis together correctly I don’t really see the point. Or is there another reason it could be useful?

I built a 1000mm last week and had the same issue.
the bracket holes, especially on the Y axis plates, are a little close together.
this means that you cannot simply lay the plate on the makerslide and scfrew the nuts in.
you need to start the forst one, hold hte plate as far away from the makerslide as possible, start the second one after much fiddling, and then scrw them down alternating from one to the other.

bad side: very difficult to do.
possible goo side: those nuts are never moving again…

Ok, I feel better now seeing these posts. I’m in the process of building a 500mm X-carve (thoroughly enjoying it by the way). I’m about to mount the z-axis assembly. Up to now every point in the assembly that involved connecting a plate to the threaded maker slide I had trouble. On the first attempt I tried forcing the second screw and ended up damaging the thread a bit. I backed off and instead of doing more damage I just tapped the thread to clean it up then I used a drill bit to make the hole on the plate one drill-bit size larger. I had to do that for all of the plates. My guess is that these holes were never perfectly aligned, but with the self-tapping screws it kinda worked because they would manage to force fit into place. Despite the good intention of threading the holes on the makerslide, that made the problem more evident.
I was a bit uneasy doing this (thinking I was doing something wrong), now I’m at the z-axis connecting to the smaller makerslide with the thicker Z-axis motor plate (much thicker piece of metal) and I’ll have to do the same for this as well. Not a big deal but, IMHO, this should be addressed by inventables. I’ve attached a picture showing the slight misalignment. 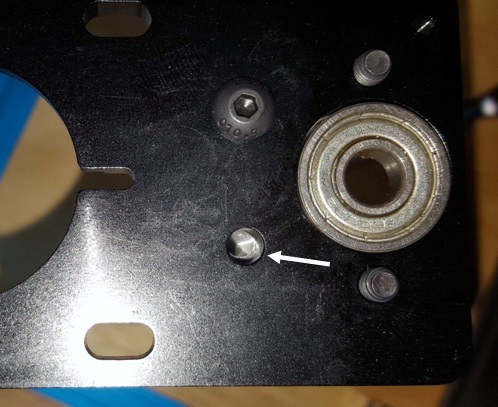 Same here! Only had trouble with the z-plate being exactly like you show in your picture… After messing around for a while, i was able to split the difference in the middle and tighten both screw little by little and it worked in the end… I was able to do it without forcing that much too!

Hope this helps the next person!

Just assembling my 1000mm kit now, and I have the exact same problem with the Z-plate. The plate holes don’t align with the makerslide, and tightening each screw alternately bit by bit didn’t work. Think I’m going to have to drill one side out.

I just got mine today and I have the exact some problem. There is no way it can go together without filing.

Once you get over the paranoia of thinking you did something wrong, its not a big deal. I just drilled out the hole slightly (same hole for each plate) and I have not had a problem since. Been using mine now for about 6 weeks, and while I have had problems (most self inflicted), I have had no regrets regarding this homegrown adjustment to make things fit.

@Tmar: Yep, just drill out the same hole on both plates. That worked out fine for me.