Continuing the conversation about an ER collet conversion from the thread below:

Has anyone tried to convert one of these Makitas to an ER Collet, is that something you could do? I just ordered one of these and I'm starting to look into the accessories! Down the rabbit hole I go!

I started looking at converting a Makita RT0700CX3 over to the ER collet system. I’m in Canada so the RT0700CX3 is what is available to me, but from what I’ve found out the RT0701 is identical.

I haven’t received my Makita yet, but I thought while I’m waiting I’d start looking into accessories and upgrades. I know you can buy an assortment of aftermarket collets HERE, but I thought it would be neat to attempt to convert it over to a more industry stanard system that’s a little more readily available, plus shipping from Elaire to me is about $20CAD!!

Anyways here is a what I’ve come up with so far! 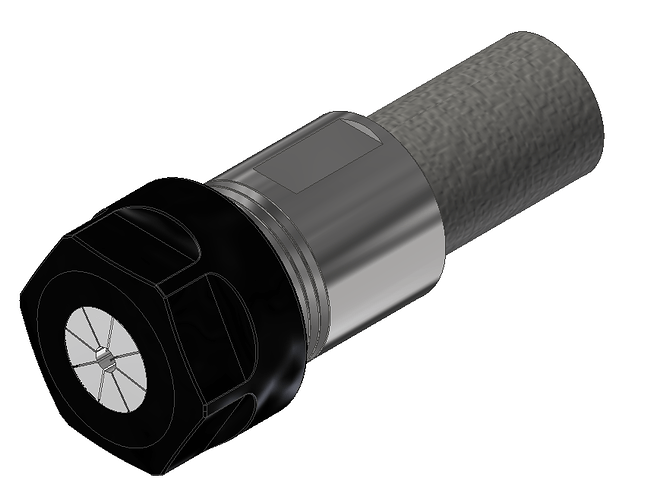 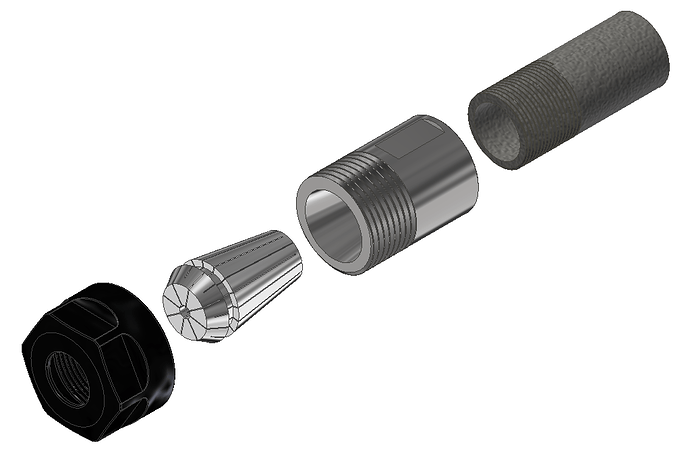 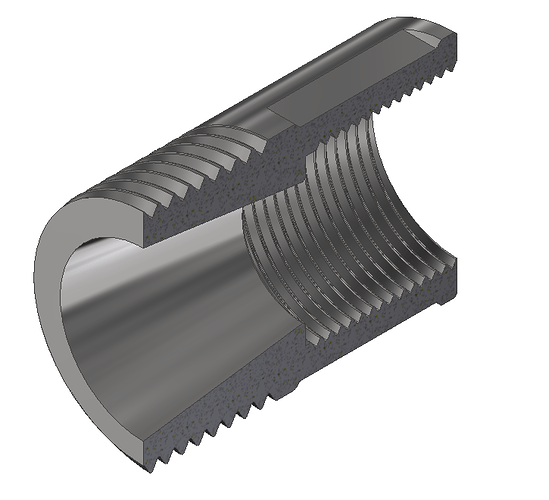 I decided to use the ER16 collet since it looked like the smallest size that would work, not to say one couldn’t use a ER20, but that seemed a bit excessive!

I’m going to look at getting one of these fabricated, hopefully it’s not crazy expensive!!

Me too! I really hope it’s feasible and if the idea does comes to fruition, that it will actually work!

The main concern with an adapter like that is going to be run-out. Manufacturing tolerances will have to be tight.
FWIW, my 800W, water cooled spindle has an ER11 collet chuck fitted.

Cutting the ER taper and threads would be a pretty straight forward job but I think you will run into issues with accuracy. Unless both the end of the spindle and the mating surface on the adapter are precise you will have a hard time getting it to run true. Tapers are best cut on the actual spindle of the machine they are intended to be used on. There is no reason it wouldn’t work but at the cost of accuracy. I don’t see ever needing more than an 1/8" and 1/4" collet for the Dewalt router on my X carve, what are you hoping to do with the extra chucking capacity of the ER system?

The main concern with an adapter like that is going to be run-out. Manufacturing tolerances will have to be tight.FWIW, my 800W, water cooled spindle has an ER11 collet chuck fitted.

Ya I was just having this thought last night, I’m going to have nail the tolerances. As for the VFD spindle I may eventually upgrade to that, but for now I’m just using what I got.

I don’t see ever needing more than an 1/8" and 1/4" collet for the Dewalt router on my X carve, what are you hoping to do with the extra chucking capacity of the ER system?

I agree, I doubt I would ever need much more then that either, I just thought it might be an interesting project!

I looked into getting this converter made and the cost is looking pretty high compared to the benefit it would bring, which is unfortunate.

Quotes were looking in the $100 - $150(CAD) range which by the time you also purchase the ER nut and collets just seems way too expensive.

I’m going to keep looking around, but it’s looking like this project is for the fishes.

Could it be a good idea just insert a shat into the ER11 collet and the dewalt collet?

Into the ER11 the shaft is fixed by heating.

I think is a cheaper option than elaire and precitionbits.

Interesting, I’ve never seen that before. I ended up just getting the Elaire collet and it works great. My original idea was going to be pretty expensive to pursue.

This is what I’ve done

I’ll test for run out etc and report 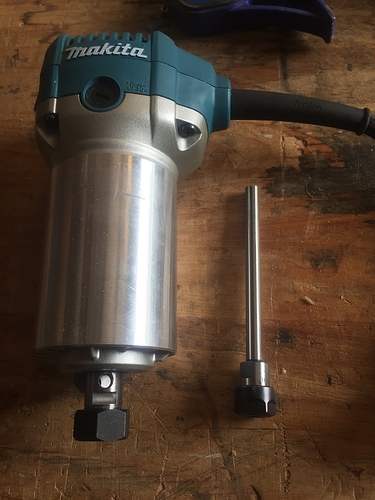 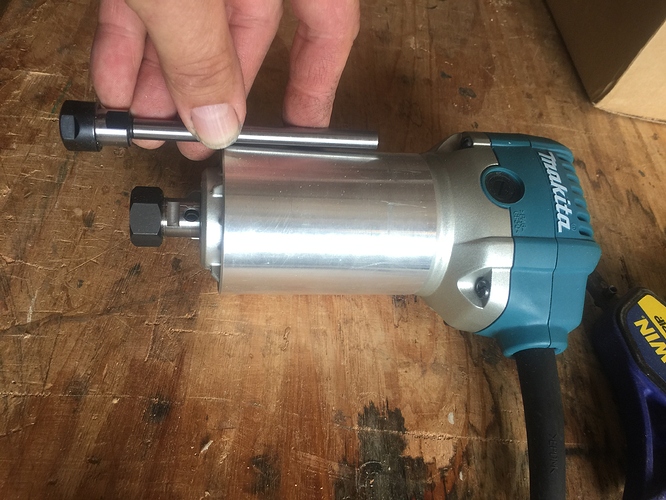 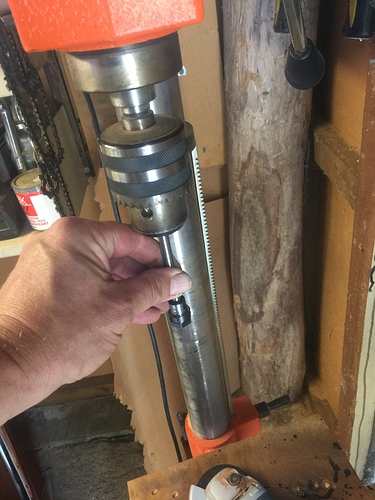 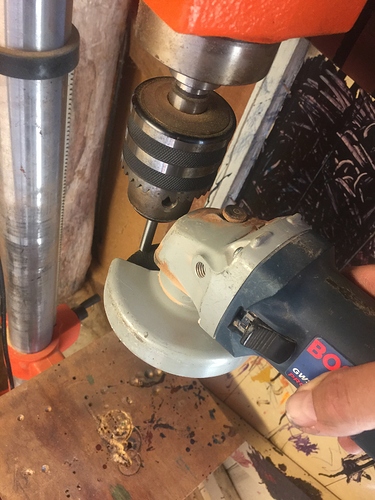 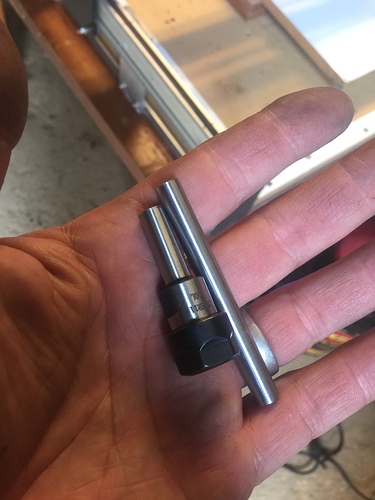 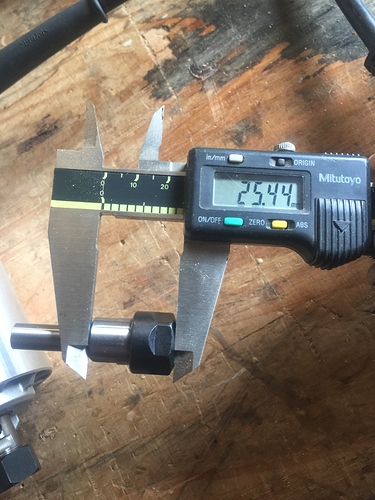 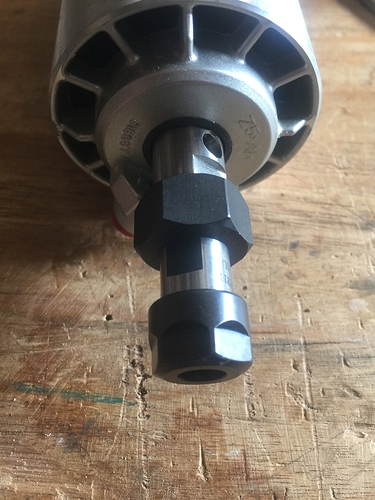 How did this work out for you?

it worked out fine,im stoked with the outcome and being able to use the ER11

i bought all the collets available for the makita . Makita Australia had some and I got them through Mitre10 , but thats only 5 collets,

Depending on the bit and stick-out , Im looking at an extra 50 mm minimum from the collet nut of the makita, If i have 50 mm of bit stickout then i’m 75mm – 3 inches from drill tip to spindle nut,

Im sure if I run this at sensible feeds and speeds Ill be fine, but of course there’s the chance stuff will break if I’m not careful,

Ive got 110mm clearance from board to X carriage so any run-out this conversion causes is nothing compared to the movement i get by hanging a 5.75" Linear Z off the poor little x carriage V wheel setup.

I’m thinking of doing the same you did, but I can’t figure out the overall lenght of your C8 ER11 collet and where to cut. Can you tell me?

The C8 er11 was 100 mm long as bought, I left 25 mm on it , I cut 75mm off ,
I left enough on the stem to go right into the makita so the collet wasn’t clamping the end of the stem,
I placed the stem into a drill and cut it spinning using a 1.6 mm cutting wheel on my grinder, my idea was it would make a neater cut and reduce any balance issues i might get just cutting it with a hacksaw,
a gram of weight out of balance at 30,000 rpm would/could cause a violent wobble,

I’m in the process of doing the same.I also went one step further and installed locking collars to the shafts so that I can adjust the tool heights in a more uniform manner for my auto tool zero system. mY overall tool length s about 3 3/4" long. I am also running these with my Hatachi 12c along with sawed down ER16-12 collets. I’m in the process of installing a ER20-16 in the Hitachi by cutting the shaft down to one inch and tapping the hole out to 10 mm, then taking one of my sawed off ER16 shafts and turning it down and threading it so that I can screw/red loctite it to the ER20 collet so It will fit my Hitachi’s 12mm collet.

i got one made, balance is fine, very slight vibration, but that is to be expected, i will be taking some of the surface around the threaded part , that will hopefully remove any vibration, run-out is 0.34 mm 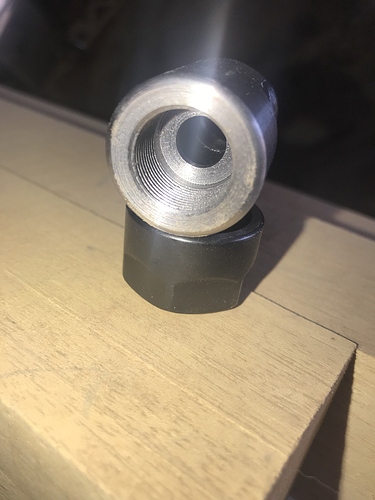 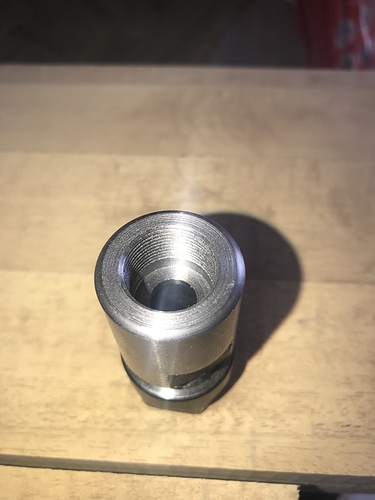 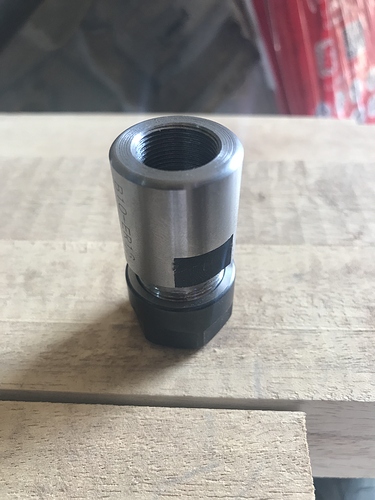 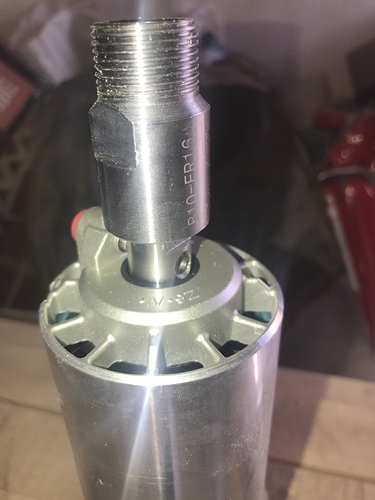 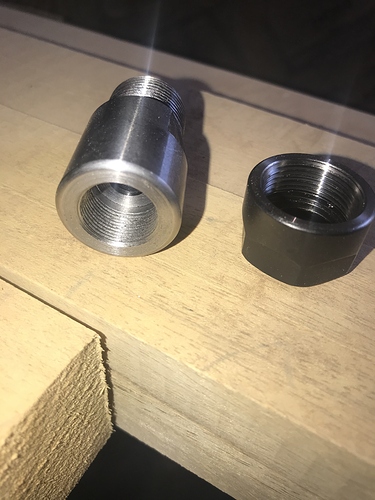 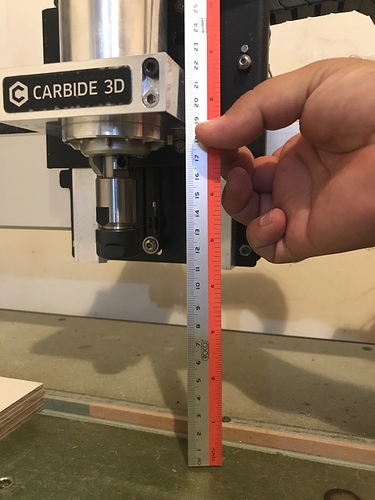 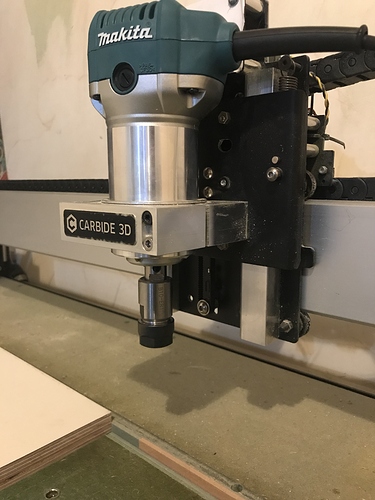 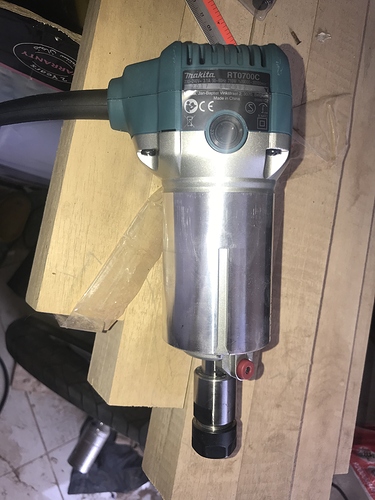 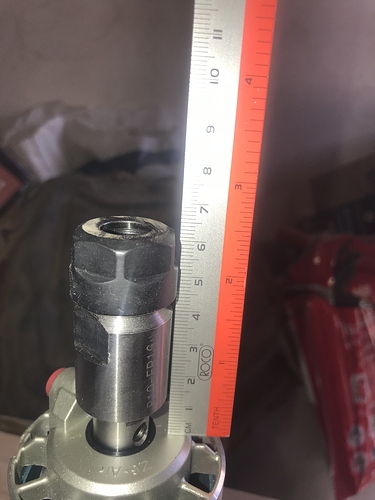 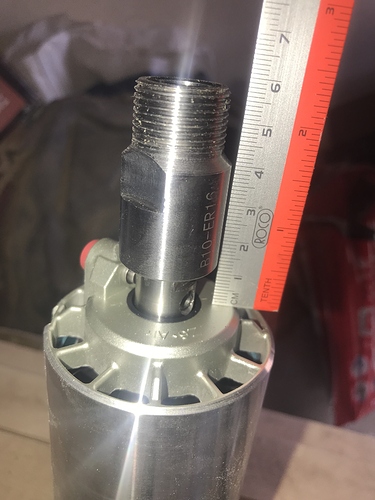 So this is something available on ebay? Happy with the upgrade?

the collet set was on ebay from a german seller, it was the only place that offers 12mm collet for an Er16 chuck
the chuck was from a different seller i had to bore it out and cut a thread so it could screw on the makita router, all in all the result is very good , i had a few drilling taskes to do with diffrent size bits that i could not hold on to with a standerd 1/4" and 1/8" collets, it is nice to have the confidence that i could use any bit ranging from 0.5 to 12.0 mm