Material left in a circle

Was cutting out shallow circles on the bottom of a new cutting board for the rubber feet. One end top and bottom went fine on the opposite end top and bottom there was material not cut in the center of the circle. Had to use a chisel to remove the lump. Created and set depth of one then copy and pasted the other 3. Depth is fine at the edges. Hopefully the photos upoaded. 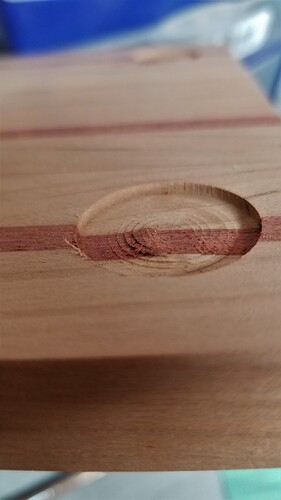 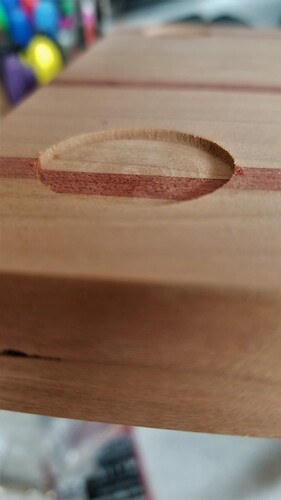 When a downcut bit is used, sometimes there is enough push away pressure to flex the material and/or the wasteboard down and the gantry up, this can result in less material being removed, and as the bit changes from slotting (intial plunge) to stepovers where it is engaged with less material, thus less pushing forces, it will remove more material.
One of the methods used to minimize this effect is to use multiple passes with the final pass being very thin.

Were you using a downcut bit with a full depth pass?

I would presume that the pocket(s) with the good depth may have been near the front, while the one(s) with the raised middle were closer to the center (where the botom of the wasteboard is less supported and can bow down more, Does this sound accurate?

Well, I took off work early to try figuring this out. I did find where the carriage with the router, for lack of a better term, needed adjustment, quite a bit. So since the wood is edge grain and the rose wood is harder than cherry, it lifted the router during the cut and everything settled in the softer cherry wood. Another lesson learned. Thanks.