I’ve been using G-Wizard for helping me set my feeds and speeds. When it works, it’s amazing! When it works. But that’s not the point of this post. One of the things I like about G-Wizard is that it shows how much bit deflection and torque is being applied for the given scenario. That got me wondering if anyone knows how much torque can be applied before the X-Carve Pro slips or something. This would be valuable information to help me dial in my feeds and speeds.

Alright, my last few posts are going unanswered. This can only mean one thing: they’re just not that interesting.

Not offended or worried.

I’m doubting the torque limits have been shared from Inventables. Maybe they haven’t even been tested. But I’ve got an idea for how to figure it out. I think if I look at people’s posts where they mention the XCP slipping, or where that is the likely culprit, and I plug their feeds and speeds into G-Wizard, that will give me torque data that I can start analyizing. I’ll put my findings here.

If anyone wants to share their own data of a time when slippage was suspected, I’d love if you could post it on here. I would need:

Hey @AdamCook1. I’m curious at why you’re focused on torque? I think most of the machines for which Gwizard is used would snap a 3/4" endmill before they lose position.

G-Wizard isn’t just for industrial machines. You set up your own machine specs. It’s just doing math, regardless of the machine. Am I missing something?

I understand the idea, but I haven’t seen it really work well on a hobby level machine.
There are some threads on other forums about it.

I guess I was wondering your end goal.

My goal is to understand one more data point to help me avoid issues on my machine. As you said, this wouldn’t be a concern on an industrial machine, but it is something I have to take into account when I’m trying to get the most out of the X-Carve Pro.

I don’t think it’s fair to call the XCP a hobby-level machine. I think it’s far more appropriate to think of it as an entry-level professional machine. It’s quite capable, but you have to understand its limits. I’m successfully running 1/4" bits at the full 162 in max feedrate. But I’d like to be using 3/8" bits for roughing, and those will experience much higher torque at full speed. If I have a good handle of the machine’s safe torque limit, I can avoid slippage.

It is extremely complex (particularly if you use modern adaptive strategies) to figure out the torque (and as shown by Titans Of CNC, you can blow past those stated limits if you use such a strategy as you are engaging a lot more cutting surface). You probably don’t literally mean slipping as a toothed belt better not slip, certainly before the stepper motor stalls and skips a step. Tool deflection is likely the bigger culprit here, and the machine is not rigid enough to take most of the loads that would max out something like a 3/8" end mill. Even on a bigger machine like my tormach I can pretty easily stall out on a 3/8" or larger end mill if I bite to hard into metals (in Fusion it’s easy enough to forget to set the chip load on adaptive cuts and the default is way too high for such an entry-level machine)

I do. If is a larger footprint hobbyist cnc machine.

When you say entry level [edit] professional machine i think of a stepcraft with vaccume table and an ATC. A laguna, or a blue elephant… not a belt coupled drive with a EMI nose box controller. The XCP could be in the realm but not the way its designed today.

I was careful not to say the XCP is an entry-level industrial machine. It isn’t in the same class. But hobby? Hardly. It’s capable of running all day long, fast enough to be profitable, and rigid enough to ensure accurate and repeatable cuts. The X-Carve Pro is clearly not in the same class as hobby machines. It blows those away.

I’m not saying it’s perfect, but I am saying it is a solid step into professional CNC work.

I don’t think it matters what category each of us might put it in. Those little 3018s bring down the average and might necessitate additional category names.
Anyway, what torque does Gwizard ask for? Stepper? Spindle?
I’d think cutting force is a more useful metric for what the machine can handle.

It just provides torque as one of its outputs. 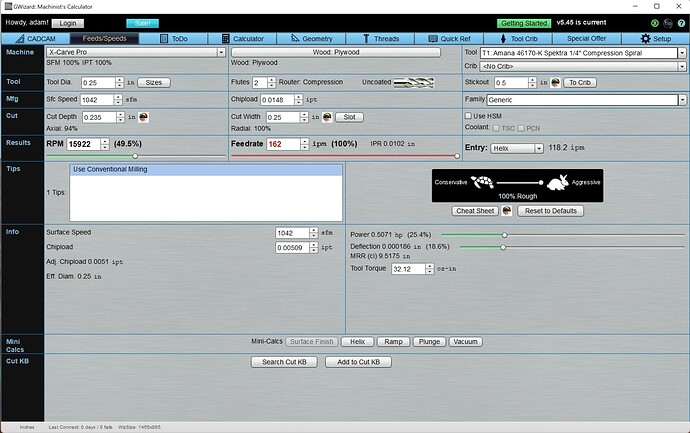