Hello, please help?
I had been in discussion in another thread but still have not arrived at a solution…
Machine- 3018, maker unknown. Bought on Ebay.
Problem simple text “STRIDER” carves both mirrored and upside down. Having tried multiple changes to $3 value. (see attached photo of settings and carving) Its currently set @ 6 and Y,X and Z axis’ move as they should. Y axis moves left with left button, X moves to the rear when up Arrow is pressed, and Z goes up and down accordingly.
Another issue is that when designing in Easel (or exporting gcode to Candle or UGS) The visualizer shows 3 axis home to be lower left corner. In running code it moves away from work rather than on the work piece. Various testing the start point it’s way back on left side nearly to back edge. Like its backwards!
I’ve attached my settings, machine, and test piece.
I really cant see myself continuing until I have this diagnosed properly.
Thanks in advance for your time! 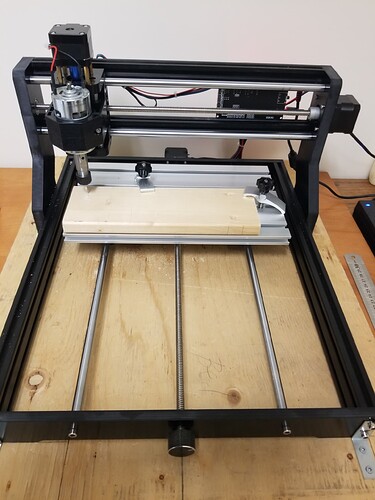 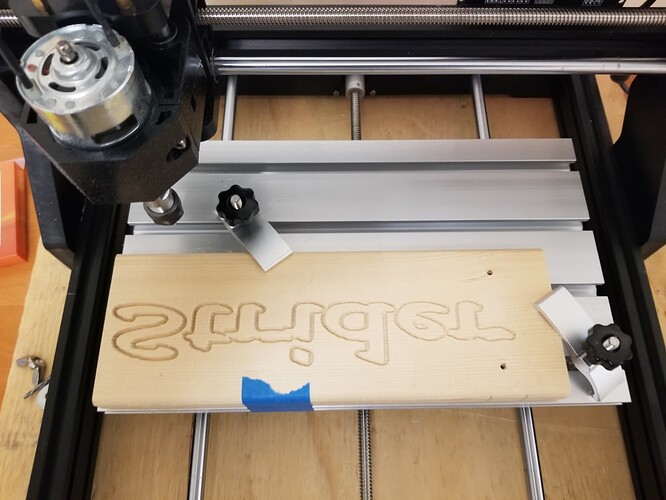 I think you’re not realizing that the movement is the movement of the spindle in relation to the board… the bed should mlve backwards when the forward button is pressed… because that would move the spindle forward.

Hmmmm. I was going to actually do that but it didnt seem right to me…seemed counter intuitive with layout of Arrow buttons. Will need to get used to that in my brain. I will retry my setup and run with it. Seems I’ve already tried 4 but I assumed that if left moves left and right moves right that up would move bed back not forwards

While I’ve got you … the $10 value is showing 115. It did that before and I changed it back to the original value and now its 115 again. Is it important in any way? What is 115? $23 I know refers to homing switches. I dont have homing switches. Is this value going to make any difference?

$10 doesn’t really matter, unless your pinging the machine for feedback and using that in your programming (99% of users don’t do this, only much more advanced users who are writing their own grbl programs by hand would really use this)
So, you can leave it at 115, it won’t actually effect the machine operation anyway.

Sincewere
$22 is actually ignored since homing is off as well, so if you see others with $22=0 well. That’s why yours doesn’t really matter…its basically and additional function that only works when homing it on

Thanks!!
You were right …obviously lol
Finally got my head around it. Simple!!