I am working on making puzzle picture frames and am finding a few issues. My test with 1/4" material went pretty decent so I moved on to the actual thickness of .5" 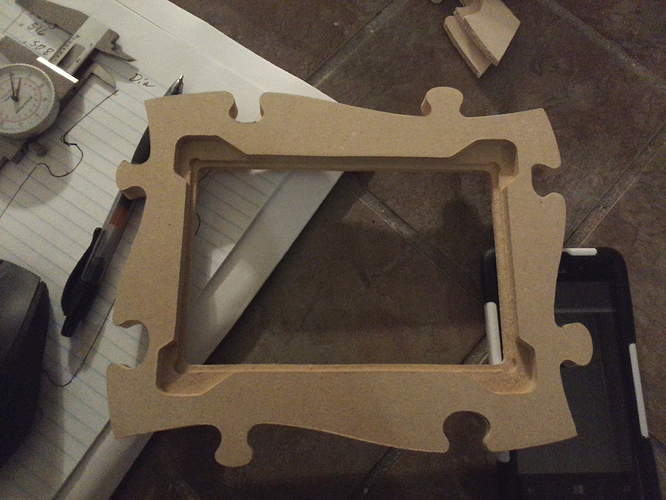 the two main issues that are apparent ( i will find out how well they fit together when i cut this one in half tomorrow and test fit the sides to each other) are it seems to be cutting at an angle and possibly losing steps. 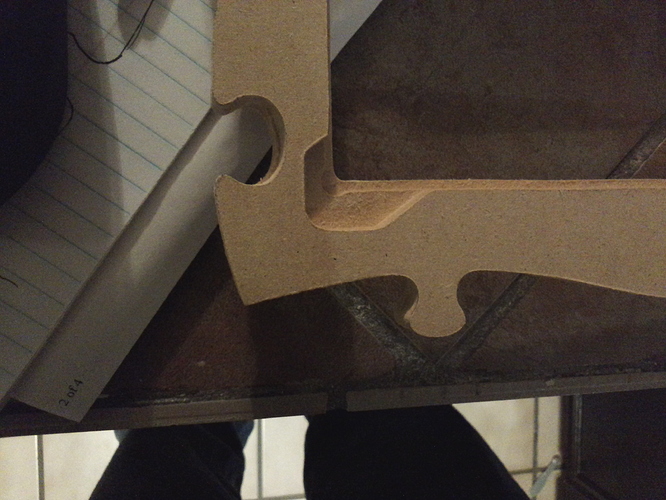 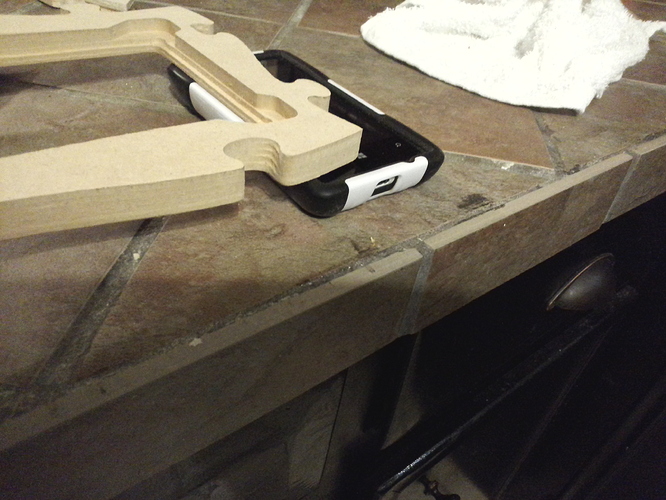 image of it cutting at an angle in the z axis. 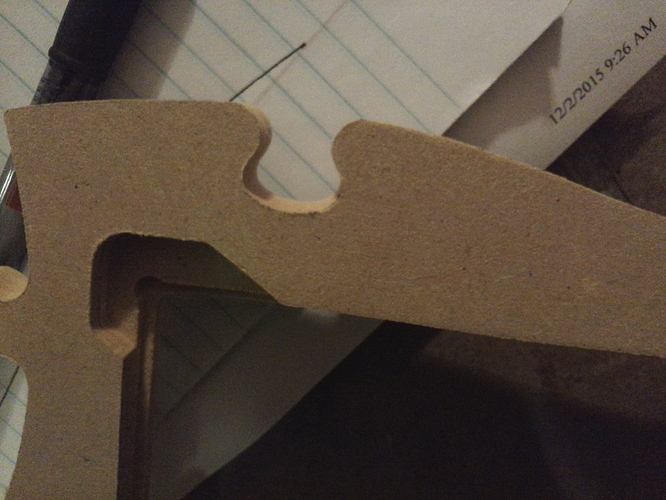 the course of action I will be taking currently is: squaring the z (found it to be around 1/32 off) (in the future I will likely be bolting 3/16 aluminum or steel | or changing the rail for a 40x40mm)

I will also be checking over the belts again, along with the pots.

Just need to get this moving wit close enough accuracy to get 25 of these done for gifts. the puzzle pieces are not meant to fit tight, but have 1/16 " gap.

I have had some really nice success with a couple of puzzles i cut for my toddler. (tried burning out the chips from the engraving bit) 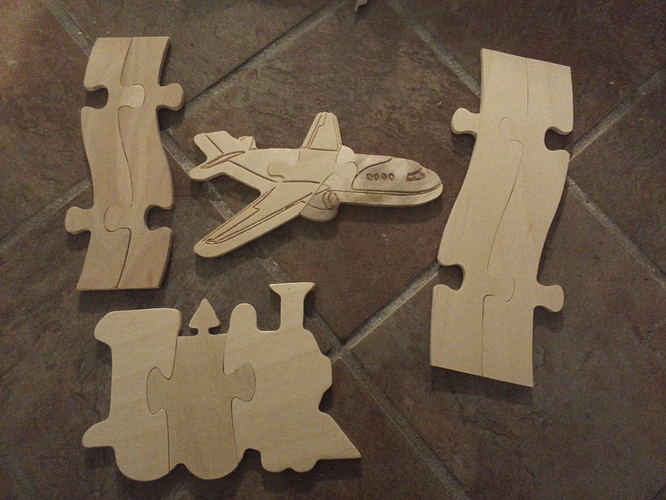 Any insight and advice would be more than appreciated.

some other details to add.

feed rate: 65in/min
speed setting (dewalt 2 at first, then bumped up to around 4 due to some chattering)

It’s still not coming out perfect with 1 missed step, but it’s passable for the purpose. after this batch, I’ll be doing the stiffening mod along with some other mods to get the full potential out of this thing. in the meantime, need to cut out another 25 of these and get them painted. 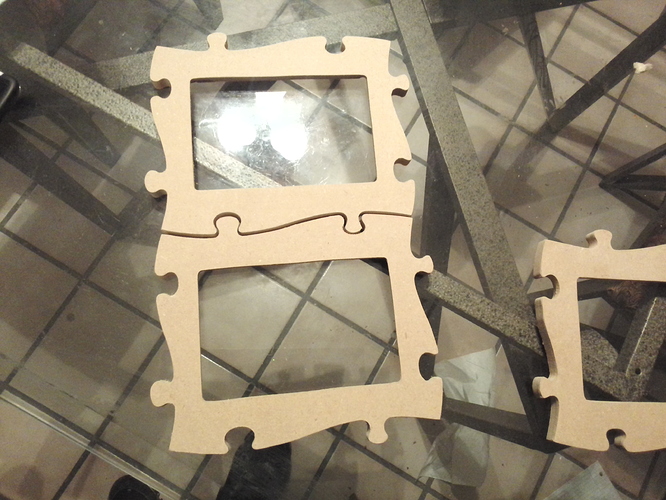 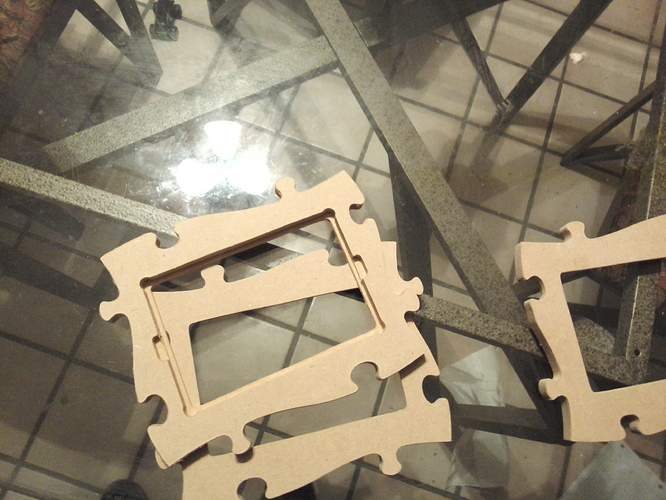 There was a video I found where the reviewer discovered that the vertical axis can remain un-level even after leveling it with a square, because you can only level it by rotating it side to side (around the front-to-back axis) but you cannot level it by rotating it forward/backward (around the left-to-right horizontal axis) without actually drilling out the holes that the X axis rail is screwed into the Y axis plates, which does not seem like a quick fix to me the way that most of the other issues can be resolved.

As for missed steps and chatter, I am of the mind to start out with higher spindle speeds and lower feed rates, just to make sure that the issue isn’t that I’m simply pushing the machine beyond its capabilities. Once I have established that it’s capable of operating like that, then I work my way up with the feed rate, and drop the speed bit by bit until I figure out the most efficient mode of operation. Just running it at some arbitrary settings and then noting that it’s not working ideally doesn’t serve to help you logically deduce what the situation is. There needs to be dimensions of comparison between trials. Good luck, looks good.

Thanks! I just cut 9 of them today with some mixed results. overall things went well. However, the v-wheels came loose (and one fell off) which allowed the z axis to move around in ways it shouldn’t. I kept an eye on it durring the next cuts to keep things tight with success. loctite will fix this issue, but I will be doing the eccentric spacer to replace the nuts and use lock nuts to secure them.

the other issue I ran into tonight, Is the final cut path, which is the outside of the puzzle, would only skim the top of the material about 3 times before finally making its way in. I will be double checking the tool path again, but I don’t think that is the issue.

the settings I started with was 120ipm @ .025 DOC setting the dewalt around 1.5-2.5 I ended up dropping the feed rate down to 90 and things seem to be going okay overall.

The missing steps, I believe were from going to fast around the corners (there are a lot of them). I set $11 to .005 and that seemed to help a little bit also.

Those frames are pretty neat, Would you share the project?

Thanks! I plan on posting them once I work out the kinks. Although I believe I have arrived at the final design. Mon or Tues the hardware should come in for hanging and holding the backer and acrylic in place. Just hope the dimension they posted on amazon are at least in the ballpark.

Cool. I’ll keep a lookout for it. Thanks!

two more cut out today before the machine went crazy. think i may have over tightened resulting in major step lossage. however it also lost major steps in the y also which didnt really make sense. I will be investigating tomorrow night.

anyone trying to paint mdf and getting frustrated with it eating a can of primer, apply acrylic modeling paste to the edges and any ‘exposed’ surface. it sands really easy and smooth with 220 grit or higher. apply maybe 2 coats of primer and you are good to go.

thats the link to the paste for anyone who is interested.

Just did this mod

Here's how I set up my eccentric-nutted V-wheels. I haven't had to make a single adjustment to them since I've done this (almost 2 months ago!) Basically I spun the eccentric nut down to the head of the bolt, then used a Nylock nut on the other end. So it would go: Bolt Head -> Eccentric Nut -> Carriage -> Spacer or Washer -> V-wheel -> Washer -> Nylock Nut. The trick is to really crank down the nut against the bolt head. This locks the threads together and allows you to adjust it with a…

and it is running so much better. With the speed i was trying to push it at (100-120ipm) it was rattling the nuts off due to all of the turns I believe. with this, it doesn’t seem like it is going anywhere. the cost was a bag of 100 nylock nuts which is around 6-7 bux on amazon. Did some test at 75ipm with a new router bit since my other ended up burnt after being plowed through the material. I ordered this www.amazon.com/gp/product/B000K29T64?psc=1&redirect=true&ref_=oh_aui_detailpage_o01_s00 and it is cutting like butter. With the stability and as smooth as this is cutting, I think i will bump it back up to 100ipm

link to the nylock nuts 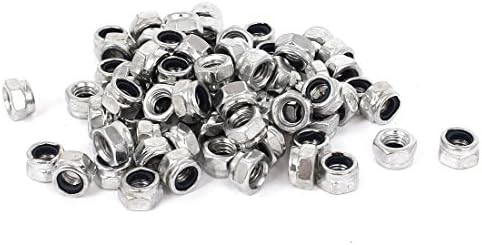 tonight I was able to run the rest of the sheet (7 more frames) with no problems until the last one. the z axis eccentric nuts came loose. It’s the only eccentric nuts I haven’t changed around like the others, so that will be tomorrow night. I was also able to push the speed back up to 80ipm along with the DOC to .05. I believe after redoing the rest of the eccentric nuts, I can push the machine up to 100ipm and probably go as deep as .1"

Fixed the z axis tonight and cut 2 out of 3 rows before stopping nearly flawlessly. I caught 1 missed step but aside from that all looks good. I pushed it to 85ipm with a DOC of .05. I think next time i will step it back to 80ipm or maybe in the middle at 83ipm. It sounded a bit bad at some points. Particularly when traveling up and down the y axis, it would make a rough noise. couldn’t tell if it was the router rubbing or something with the axis itself. The lost step however was in the x axis sifting to the left by a hair or two. the bit I am using has 1" of flutes sticking out, so maybe it’s too much force.

Soon i will make a “projects” post which will focus on the processes for creating the frames. this was more or the less a log to hopefully help someone with similar issues.