It has a mark on one piece - I got careless when testing an auto tool-hight routine in LinuxCNC and it marked up the bed… Its just cosmetic. New from Misumi there $55 +shipping for two. 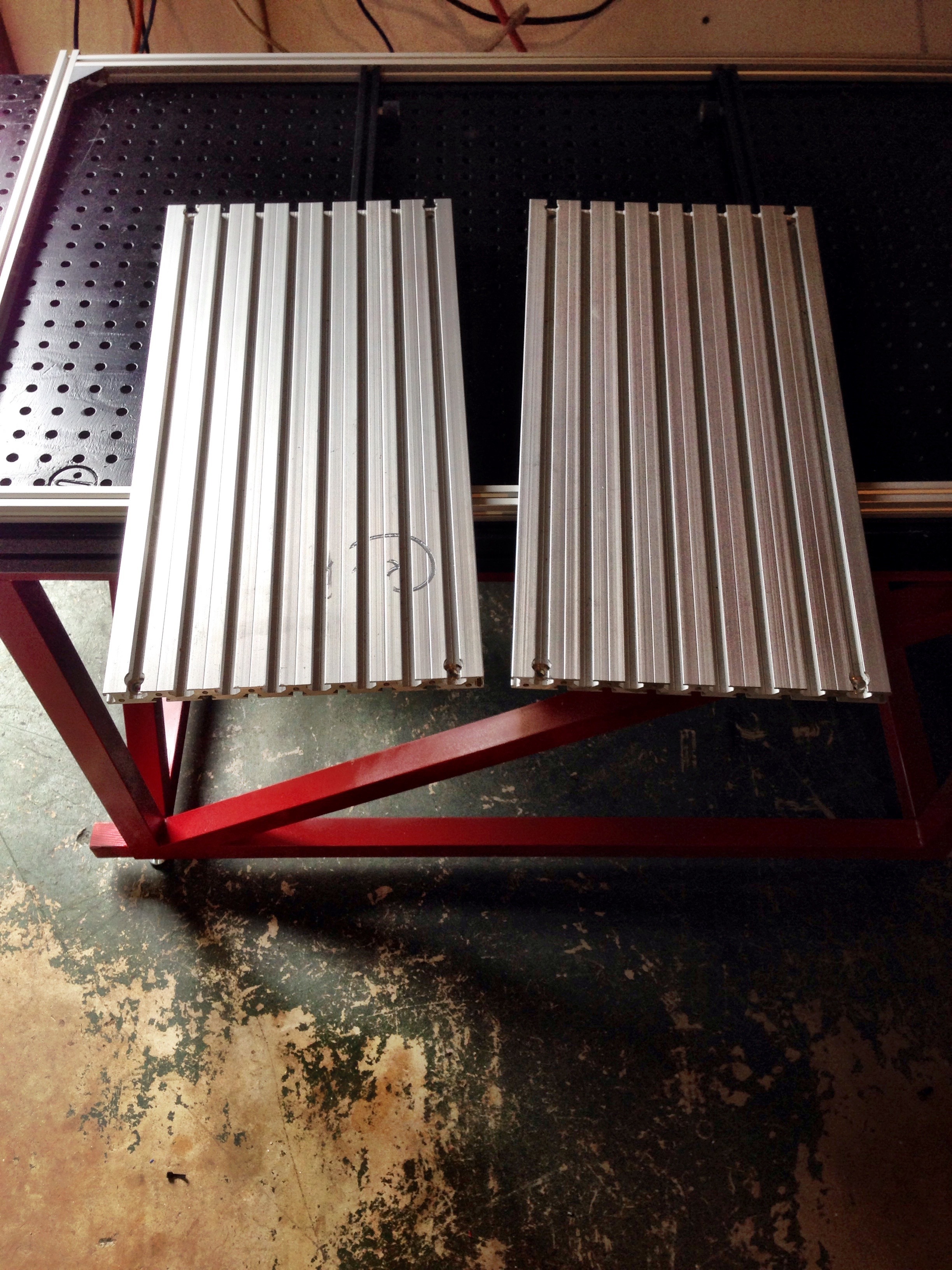 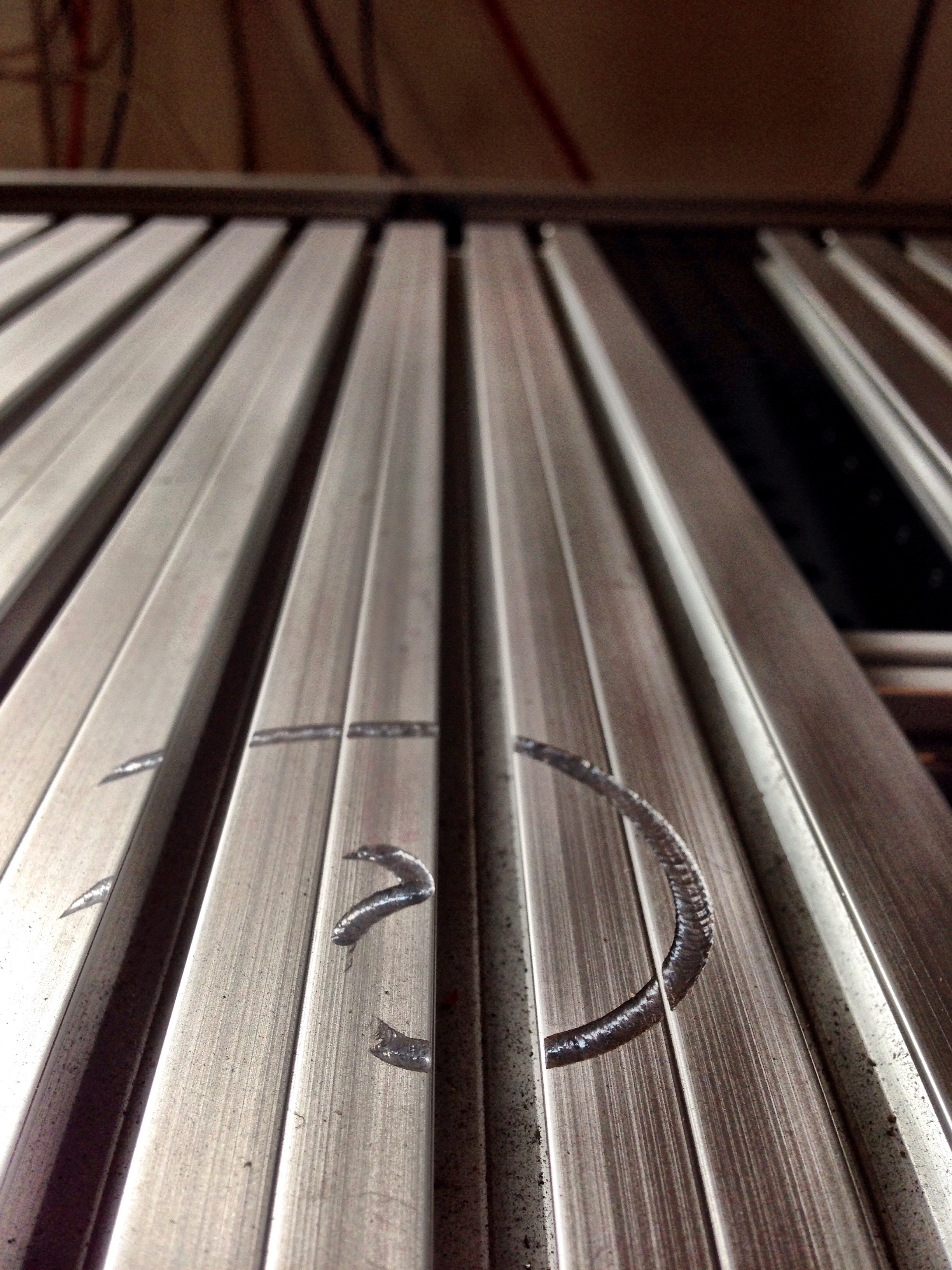 I ordered some of the same extrusions from my 500mm x-carve. Did you have to do anything to get these working besides drilling them?

Nothing to do but drill them. The fit & finish of these boards is perfect.

I used a 1/4 inch Forsner bit to get the recessed pilot hole drilled. This hole doesn’t go all the the way through, it stops about 1/8" from the bottom. Then drill an m5 hole in the center of each pilot hole. I’ll take a closeup picture of one and post it here. You will need a drill press with a fence of some sort to drill them however.

Is no one making these mounts. Do you have a DXF drawing of the mount.

@JohnScherer - I think you meant at least 1/2" aluminum for the mounts, since much less and you won’t have enough thickness to put a bolt into it. The ones Inventables makes for other routers are 18mm (just under 3/4") but I am guessing they are beefy since they use only one for the mount? I used the drawing for their DW660 mount and just modified it to used a 65mm hole instead of a 63.5mm. I got in touch with the local tech school and gave them the drawing and they are making them for me as a class project. Will post pictures once I get them. They even printed some out using their 3D printer as a mock-up for me to test before moving forward with the final product in 3/4" 6061. I am having 2 made. I would rather have 2 and be a little heavy. I can always have someone mill them down a little thinner if they are just too heavy as 3/4".

So is the mount that john is talking about 63.5mm ID for the router.

@DavidSohlstrom - No, the mounts needed for the Makita 701 would need to be roughly 65mm in the center. The ones Inventables makes for the DW660 are 63.5mm. Depending on their tolerances when making them, I doubt VERY seriously they will work for the Makita. When I measured my RT0701C, it as 64.75mm. Honestly, rounding up to 65mm may still not be enough clearance to work correctly. That’s why the local college is mocking some up on their 3D printer before they mill them from 6061.

@DavidSohlstrom, No one sells them as far as I know. The DXF files for the ones I was looking at are in the first post on this link.

John
I am unable to get the dxf file to open on two different CAD programs. Just tried a third program no go file had errors.

I downloaded it and was able to convert it do a dwg. I’m not exactly sure the dimensions remained intact so let me know if it works for you. I don’t know what the guy used to draw it but got some problems.

Your dwg file opened in DraftSight. No dimensions but that was not a problem. What size holes in the base to attach to machine. What size threads in front flat and for clamp bolt.

Hey Dave, I don’t have any specific requirement for the size. I think most of the other larger bolts on the X-carve/Shapeoko are M5. I would likely use M5 socket head cap screws so they could be recessed. I would say M5 or M6. M5 is probably fine, but I would be interested in your thoughts though.

So I just got my extrusions in the mail today. They look great, but they both have a slight warp, so they are a little lower in the center than on the edges. Just checking with a straightedge, it looks like about a half a mm, maybe a bit more. Would it be worth taking these to a machine shop to have them milled flat? Obviously doing something that big is way beyond the capabilities of my home shop.

Are you talking about the makerside being bent or the 20mm x 20mm base extrusion. I’m not sure I would have them machine it flat either way. If its just .5mm out, you might be able to straighten it with a very slight bend in the reverse direction of the curve. But maybe @DavidSohlstrom has some thoughts.

If you have them machined you will have more problems then it cures. Extrusions by there very nature have a lot of internal stress. If you machine one side it relieves the stress on that side and the extrusion will warp in the other direction. If I understand correctly you are saying that the warp is cross wise on the extrusion. You are working with 250mm wide by 500mm long extrusions. Just turn the extrusion so the long side runs parallel to the X axis. then put 3 additional 20X20 rails running in the Y axis and bolt them down to the rails and just pull the warp out.

John
Give me the center to center distance for the bolts what will hold the mount to the Z carrage and the diameter of those bolts.

The misumi 250x500 extrusion is bent a bit. This is apparently within spec. It seems like any wide and thin extrusion like this will warp.

If you put the two extrusions together, top to top, you can see about a 1mm gap between them in the center. It does flex a bit though, so maybe if I just bolt it down to something flat it will straighten out. I was thinking of ordering some more of the 20x20 extrusions, and using them add a bit of structure.

Ohhhh, ok. One of mine had a slight curve like that but after you drill them and get them screwed down, they flatten out. For my new 1000mm x 700mm layout, I added extra 20x20 extrusion, two additional ones, in the center for added support like your talking about. I don’t think it will be a problem. I haven’t purchased new 1000mm extrusion for this layout yet though, I need to replenish the bank account first

Give me the center to center distance for the bolts what will hold the mount to the Z carrage and the diameter of those bolts.

For a while at least I’ll be using the X-Carve plate to mount them, the center-to-center distance for those is 68mm and look to be M5 holes. those dimension work for me.

@JohnScherer OK here is a small problem. the base of the mount is only 80mm wide so can you come from the back of the plate into M5 taped holes in the base.

Yep, I think that will work Dave.