Does anyone have experience with cork/rubber/homasote or any other material to try to dampen sound? We tried placing some cork mats beneath Carvey but it didn’t seem to help much. Looking to see if anyone has a solution that has worked for them.

Generally if you’ve done what you can to mitigate vibration from the bottom, and you do seem to have with the use of your cork mat base (have you checked whatever you have the machine set on that could be causing some noise also), then what you can hear is most probably coming from the top and sides, or the joints of the machine where the lid is vibrating against the rest of the frame. An electrical tape barrier around the edges of the lid and frame should mitigate that somewhat, but as for the top and sides, cork matting afixed to the outside of the enclosure would act as a sound barrier.

It kinda depends how far you want to go, and what you’re willing for your machine to end up looking like, if all else fails then a foam lined box of a size to fit over it, you’d probably even get away with putting an acrylic window in the front considering the amount a sound proof box would mitigate.

Is this still an issue? Have you already found a solution?. Noise is an issue that also concerns/interests me.

(hmm… are there forum preferences on necroing a thread?)

I placed a hard rubber mat about half an inch thick under my X-Carve and it really reduced the noise. The bench was acting like an amplifier and the rubber mat stopped that.

I personally haven’t been able to do much experimentation with the vibration mitigation. I have placed My carvey on cork feet, and it only had a tiny effect. In some cases i have actually thrown a blanket over the machine to reduce the sound level of the vibrations which actually helped a lot. I found that the loudest sounds actually comes from the backside of the machine. I have considered putting a sound insulation plate on the backside with accessible holes for the screws etc. - like the ones you can get in sheet-form for cars etc. But off course it would not make the machine look better.

However I recently got a tip by a professional CNC programmer who said that the type of vibrations he could hear from my machine, most likely was resonance from the milling bit - not so much other rattling parts. He recommended that I get more bits that are shorter, so I can select the shortest possible milling bit for the material - that could reduce the vibrations a lot.

We have our Carvey on a solid wood-top table against a concrete wall so I’m going to keep an eye out for a rubber mat to try for underneath and maybe some “acoustic” panels to try on the wall.

Hi, have you solved your carvey noise probelm? I am having my carvey in my apartment desk, however, the noise it creates still seems too loud for me and really get me a bad headache… have you tried out some acoustic egg crate foam panels? Or any other kind of solution you have found out it will be helpful to reduce the noise?

Hope you have solved your problems and I will love to hear your suggestions too.

Have not solved the sound issues. I have been using shorter bits and I usually leave the sawdust when milling, it seems to help a little bit to dampen sound. I work in a small makerspace that is almost entirely concrete and wood and along with the exhaust sounds of laser cutters have given up on having a normal volume conversation in our space.

Hello Brian, have a look at www.vigurus.com vibration absorption material called ‘‘SP1KE’’ this ‘‘rubberized’’ material do a good job for vibration attenuation and damping sound. I have been using it and I reduce the sound by 10db (originally being about 80 to 81db and now I am now 70 to 72 db. See pictures attached. Vigurus-1 is the SP1KE (pink color) and Vigurus-2 is the brown color already under the X-Carve board (brown color). 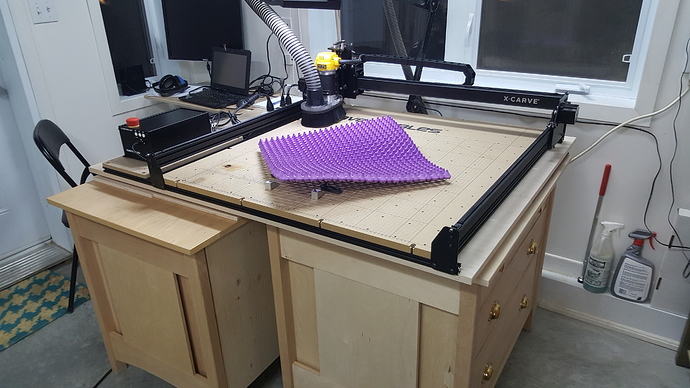 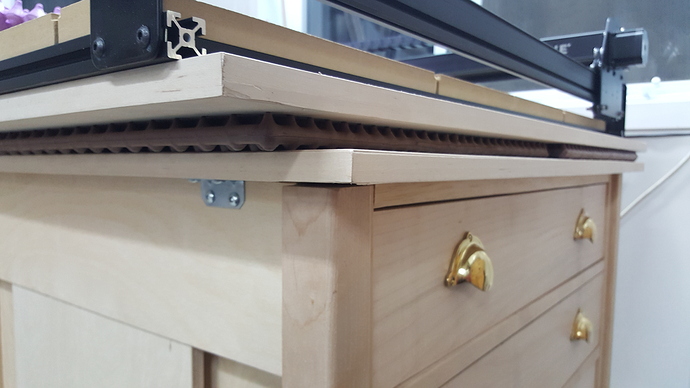