I wish it cost less than my current car, NAM37. I’m working it into my business, though, so it’s more on the line of an investment than a specific individual purchase.

Not a bad plan, I suppose! I just generally don’t have much of a use for material this hosed. I mean, unless your piece is less than an inch or so long, that arc is going to start to be pretty major. I suppose it’d be fine if you were nailing it to something, but aside from that…

Nice work Dan. Isn’t it nice cutting without a router screaming away?

It really is, although particularly on the acrylic material I could do without the smell. The fume extractor does a good job of getting rid of the actual smoke, but the room stinks a bit afterwards.

I particularly love the feedrate on small parts, trying to use a rate like that with a 1/23nd end mill that would be required to do the same with a rotary tool would be disastrous. Of course, downside being that I have no good depth control, either.

I think this is going to be at its best as a combination tool, working the detail engraving and soforth on larger parts made with the X-Carve.

Looks amazing, Dan! I’ve been considering an Epilog as an upgrade to replace my modified Shapeoko II, which I turned into a laser engraver.

Just curious about how loud your Epilog setup is. Any info would be much appreciated. Also, Are you using a machine to force the exhaust air along?

Depth control is obviously a lot more difficult but possible Dan. Adjusting feed rate and power on the 2.8W J-Tech I can cut halfway through materials but requires test runs first. Even so on things like plywood it’s a bit hit and miss.

Where it comes into its own is for things like cutting and scoring card. With the thick black card I use I can score fold lines by cutting half way through in a pretty consistent fashion.

With the Epilog having 10 times the power I’m not sure if you can get that kind of control though would be something you’d need to try.

I’m incredibly pleased with it so far, Matthew. The large bulk of your noise is going to come from the air-assist compressor, and the ventilation system. With my setup (a 400cfm centrifugal fan and an airbrush compressor) I can easily talk to another person right next to it in a conversational tone. It’s louder than my space heater, quieter than a vacuum cleaner. Forced ventilation is NOT optional when you’re cutting up plywood or doing large engravings, it will completely fill the laser chamber with smoke in seconds if you don’t have it running!

Ian, it’s more or less the same with the Epilog. I can and do score paper and card with it, I have a set of particular settings that I use just for typing paper, actually. When I’m setting up an engraving, I typically use the outline vector of the object (since I have been making most of the stuff I’m engraving, I can just project a DXF from the model, and import that for the outline) and place my engraving inside of that. Then I’ll have the laser mark a sheet of paper (just discolour, no material removal) with the engravings, then come back and cut it out. With that template, I can hold it over the actual object and make sure my details are all where I want them to be. Then I just load the settings for whatever material it is, and run the actual piece. The control level is phenomenal! I haven’t done one of those hinges yet, but it is DEFINITELY on the to-do list. Right after Christmas, I think, when the laser isn’t booked wall-to-wall with gifts.

Here’s one I did for a local friend, this is (obviously) one of my pen stands, but I decided to use the laser on it this time. This is actually the first piece I’ve made with the intent of lasering it right from the get-go. The base was X-carved, of course! Laser work took about a minute. 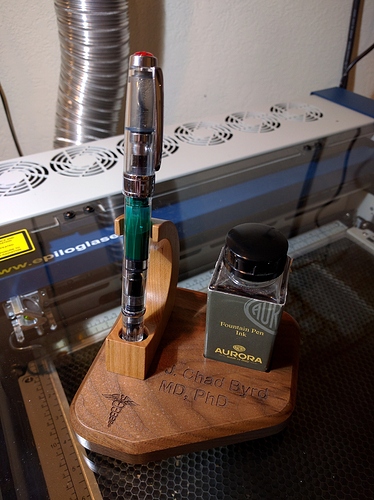 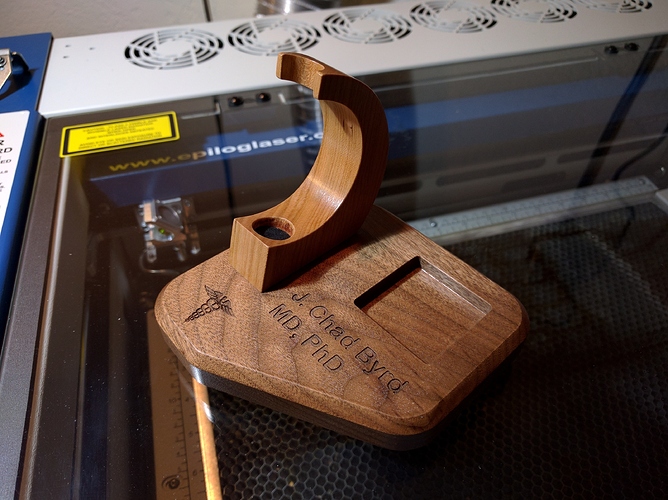 This is an engraving on leather for a friend, first time I’d tried leather! I did a couple test runs on scrap first, then the final. Total engraving time for this was about two minutes. 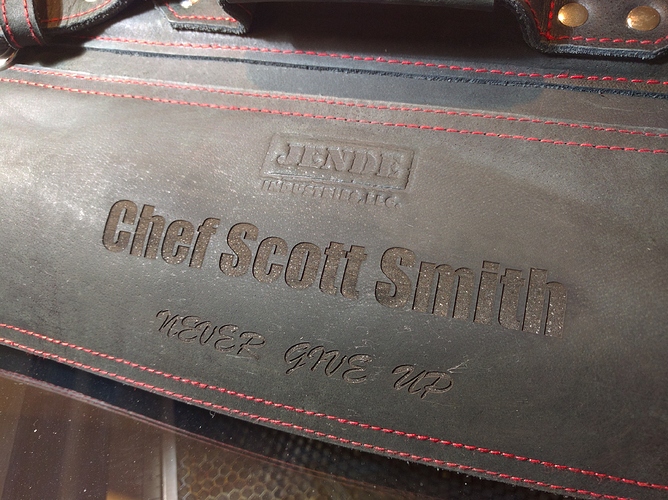 Here are a couple more of my pen stands, one in Purpleheart (on the left) and one in red Marblewood. These were engraved for a friend as Christmas gifts for his mother, who is a cat lover. 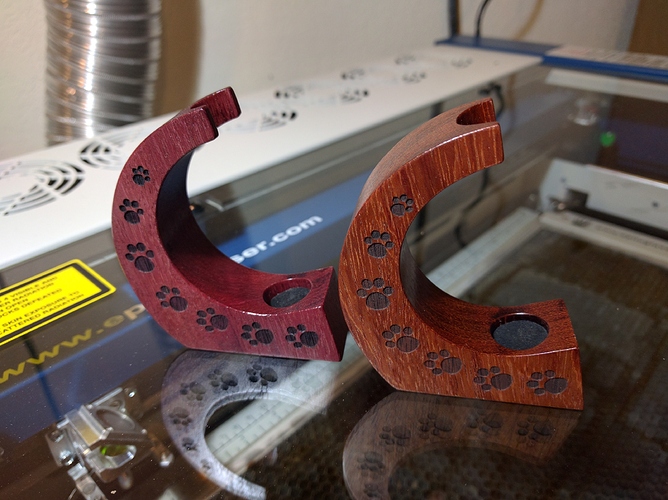 And these started out as just fun projects, then I ended up making a bunch of them on request. This is about a third of them. Total time for this sheet (30 pieces) is about 18 minutes, my graphics layout is not very efficient, time-wise. I could do it in quite a bit less now, but it’s easier to just keep pushing the button and walking away. lol 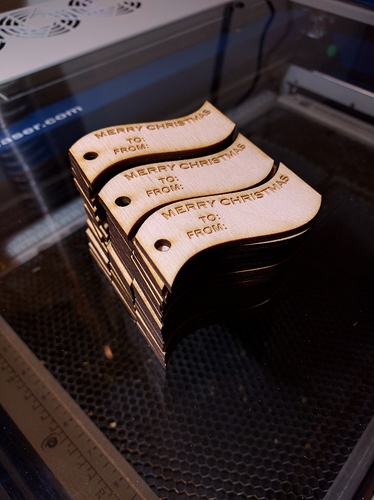 And this one was just a toy-around to see how easily I could cut paper. This is cut from a matte photo paper, and the total cutting time took about two minutes. I could do it faster now, but this was one of my earliest projects and I was still very tentative about power levels and feed rates. I’m now much more comfortable with pouring on the power, and adjusting the travel speed up until it works right. 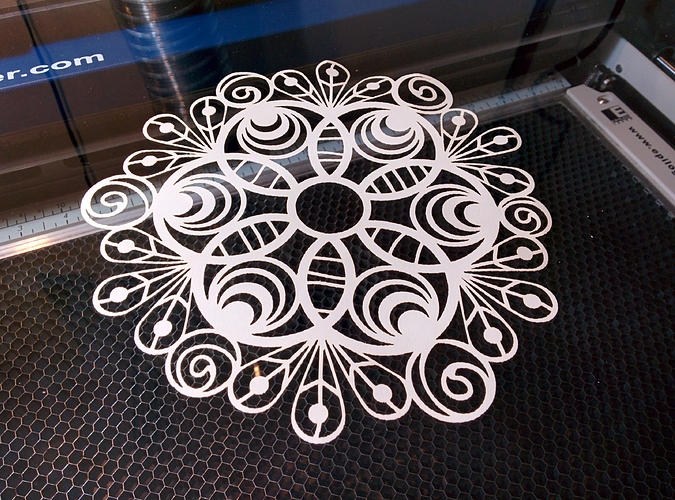 I don’t even have a car

Who needs one? Get a laser instead!

I’d certainly think so, particularly in that I can scan in parts from the plans directly, scale them, and send them to the laser without even having to model 'em up!

Fair pile, you’ll need to contact your dealer for exact pricing, but this one was just a hair under $11k.

Is there anything similar to the Glowforge that is available for purchase now, somewhere under $3,000? My brother is very interested in the Glowforge but we aren’t able to get a good idea of when they actually start shipping.

As far as I know, if you want to stay below ~$8k right now the only real options are the ChinaLasers. Some are distinctly better than others, there are some assembled here in the US that have domestic support and a pretty decent rep.

I went with Epilog because I can be sure of quality, and be sure to have support and spare parts available, since laser tubes ARE a consumable, no matter who makes it.

How easy is the epilog to use. My girlfriend really wants an etcher so we can customize products but I want to be sure she can use it as well.

It is exceptionally easy to use, Windows actually treats it like a printer. You design whatever you want to have engraved or cut (the laser interprets a line less than .003 wide as a cut, and great than that as an engrave) and tell it to print, just like you would to an inkjet. The “printer properties” panel is the dashboard from which you control laser power, speed, and all of its other options (and there are many!) then you can save the set of settings you have put in for re-use later.

Once you’ve printed the project (which sends it to the laser) you go over and put whatever you want in the laser, focus it (or let the laser focus itself, it has autofocus) and hit the green “go” button.

It really takes quite a bit longer to describe than it does to actually do. There are a LOT of options, too. For instance, the knife roll I engraved the leather for a couple posts up was engraved with the “center engraving” option. Basically, that lets you re-set the home position for the laser to anything you want, anywhere in the volume, then it treats that as the CENTER of your artwork. So, in the case of the roll, I turned on the pointer (a red dot, like a very small laser pointer, that shines down the main laser path but is eye-safe) and released the drive motors (there’s a button for that on the controls) to re-position the dot where I’d measured out the center of the logo should go. Then hit the “reset home” button, turned off the pointer, and sent the engraving job. Took about a minute to get it all set up, after a couple test runs just to be sure I wouldn’t obliterate the nice finished product with a bad power setting. All the test runs came out well, but I’m just a tad extra-twitchy with someone else’s stuff, so I did a couple just to be sure!

I just finished setting up a project with my wife out of cardstock, actually. She wants to make tiny little paper houses, so I drafted one up in CorelDraw, and used the “colour mapping” option to define between cutting and scoring. Red lines have one set of settings for the laser (15% power, 70% speed, 2500 Frequency) and green lines have another set (5% power, 90% speed, 500 frequency). That was chosen, with a bit of experimentation, to give a nice clean cut with no scorching around the edges, and a good, crisp score along the fold points without weakening the card TOO much. I’ll have to take a picture of a finished one, they look pretty cool!

This is set up with the full size of the work area being equal to the 18x12 size of the laser, and a black guide box drawn at the 8.5x11 size of the sheet of card to help me lay out the pieces. I print using a “selection” option, so the outline isn’t printed. If I forgot that, the laser would trace around the outside with “cutting” settings. Wouldn’t hurt anything, but would take more time on the run. 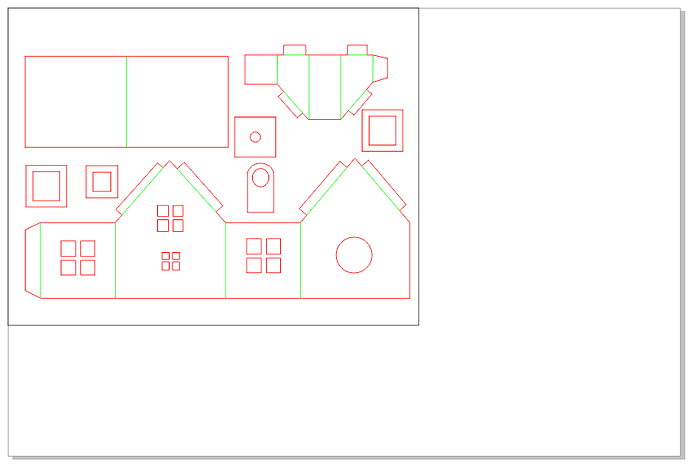 EDIT: Took a couple shots. This is of the prototype, the later version that I showed the graphic for has tabs for easier assembly, so it squares up a bit better. But this gives the general idea. Total laser time is 1min 12sec. 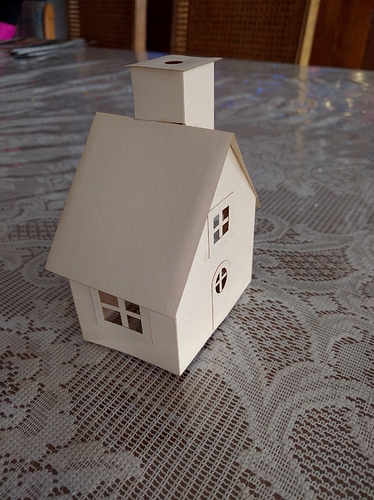 And here’s a project I’d been wanting to do for a while, another iteration of my pen stands. This is a knock-down stand, intended for the guys who take custom-made pens to shows and craft fairs. It packs down into a 4" x 4" x 3/8" volume (about six in a USPS small flat-rate box, for scale) and puts together in just a couple seconds into a stand for five pens. Was fun to make, too! 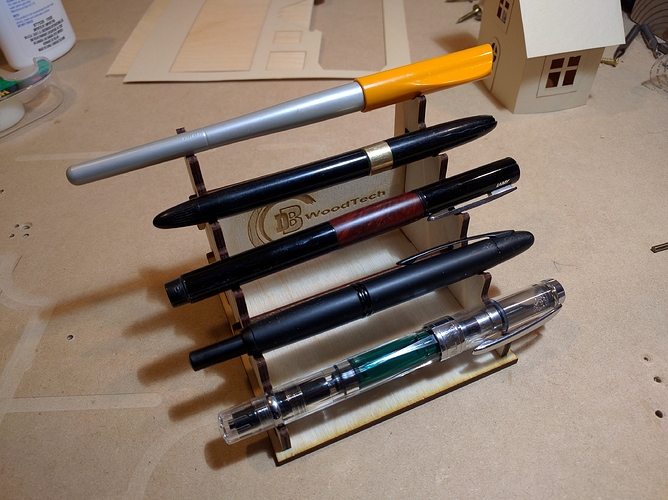 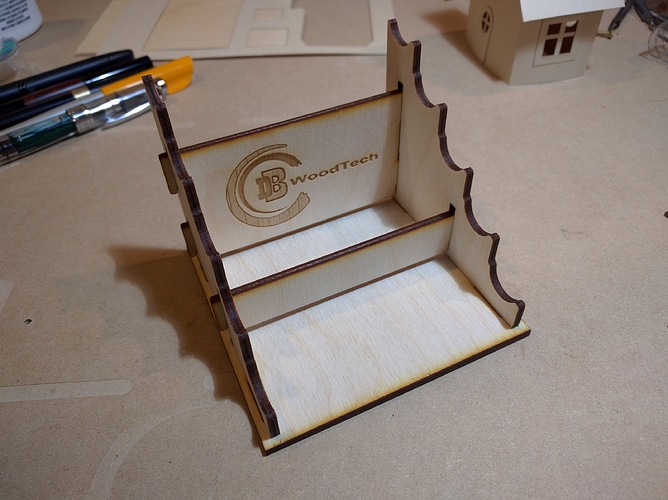 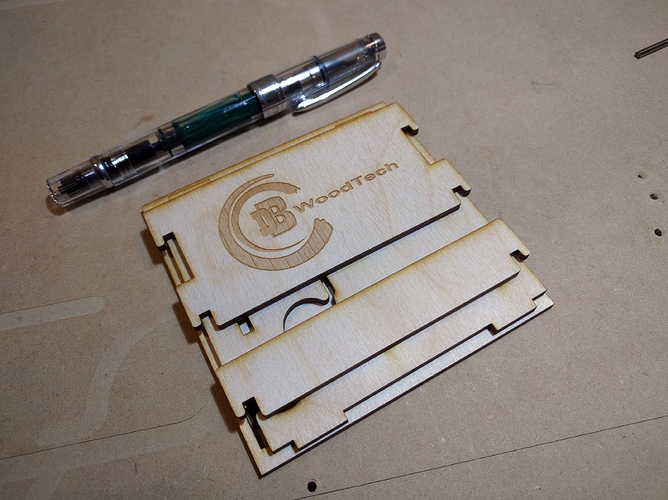 And cranking the scale down to the small end! This is done in 110lb white cardstock, all the marking was done with the laser as well. Pay particular attention to the door, and the chimney! We need a better method of applying the glue, that’s our next weak point in the designs. I think a needle-tip applicator or a glue pen will be required.

I could actually make this about half the size without giving the laser trouble, but it’s already hard to assemble due to scale. 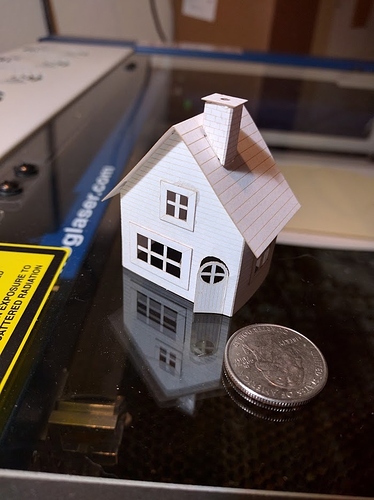 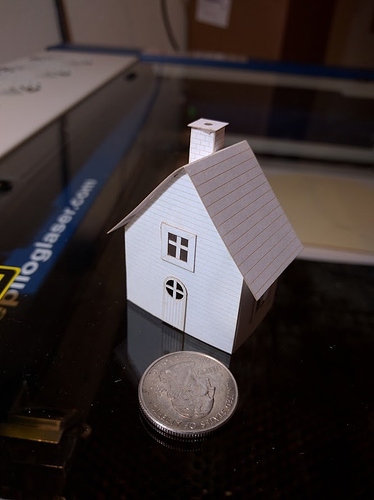