Continuing the discussion from Apps in Easel: Vectorizing images:

Another vote for the gears

We were going to focus just on the image vectorizing app, but since I’ve been working on a gear generator anyway, I might as well post what I’ve got so far. So without further ado, here is the second Easel App: A gear generator.

It is not nearly as advanced as some of the other ones out there, but it gets the job done for a fixed pitch. If anyone is interested in collaborating on a more complex version, I’ll post the source as soon as we release the v1.0 API and we can work on making it better together!

Check out this thread for more info about Easel Apps and how to sign up to use and develop them. Apps in Easel: Vectorizing images

These are the sorts of things that are really going to help X-Carve and Inventables to succeed. There are lots of plans on the internet to build your own CNC, and lots of places that sell kits, but what they don’t have is a software solution from design to cut.

Although Easel still has some room for improvement, it is really on it’s way to becoming a well rounded package and being able to add apps like this goes a long way to making it a complete solution for hobbyists and professionals.

WHAT! Just stop, there is too much awesomeness happening, I can’t take it!

A lightswitch complicator is that much closer…

making a complicator with a confuser. Just who do we think we are? The government?

My wife is not going to like it when all the switches have complications,

. Glad it was only a few bucks. Great add.

What are you going to make with the gears?

Seeing some strange artifacts between teeth… 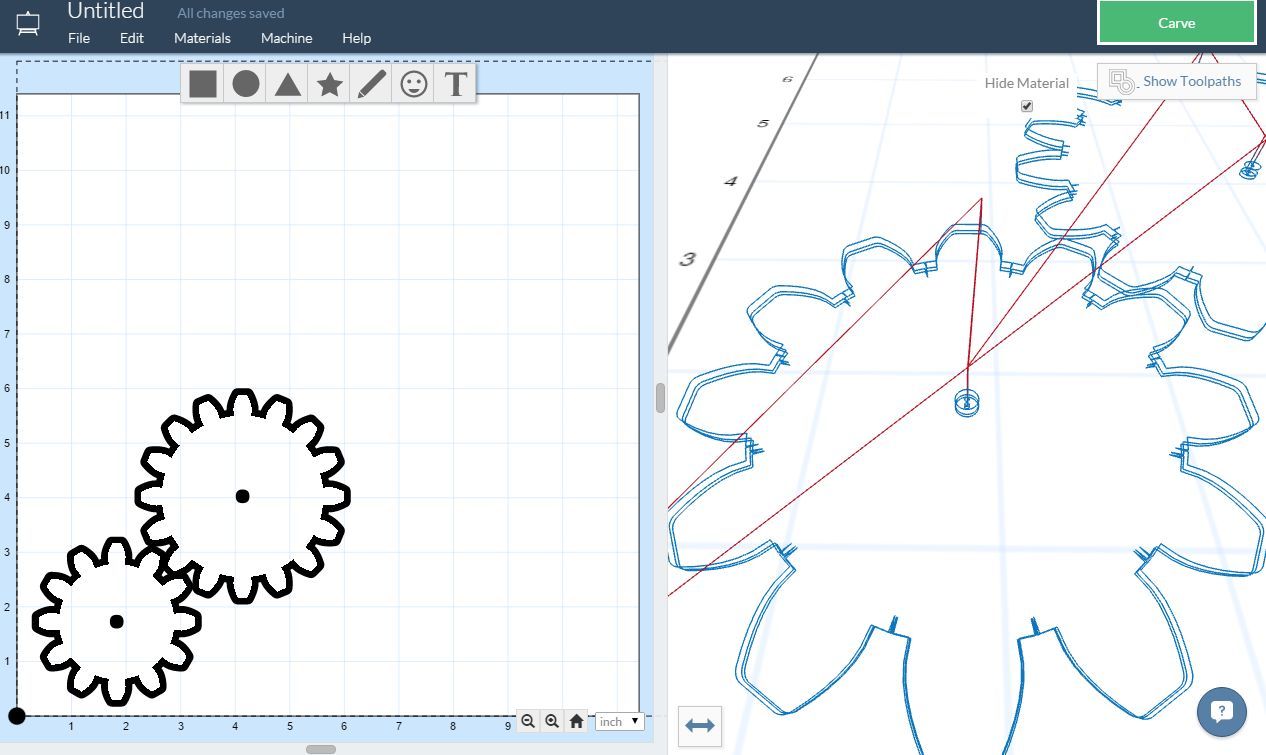 I’ve had an idea to make an expanding patio table that will go from regular to a full size table tennis table! This will definitely help!!

Hmm strange, that is only when you use the “outline -> outside” option right?

This was fixed today, just deployed. It should fix this specific issue and also other similar issues where there are sometimes little “hairs” sticking off the toolpath. It ended up being due to some numerical instability with the offsetter.

Could there be an option added to the gear generator app to generate a geared rack? It would be awesome to be able to make rack and pinion assemblies!

Can I also suggest a mm option? I’m in the UK and have used metric my working life and a 1/8th inch means little to me (but I can use Google Convert).

Nonetheless, my coming weekend is all about gears, making a camera pan widget that slows a driven stepper to 1/4 rpm for time lapse. Yes, I know you can buy kit to do this but not the same as making it yourself, you know, with working gears!

Another paradox as the x-carve is metric.

Up vote for the linear rack to correspond to the gears to make all sorts of stuff.