More of a workspace upgrade

Since I got my X-Carve, I had been using my main computer in the office to design parts between Illustrator and Easel and generate the Gcode. Then I sent it down to the workshop where I ran it on a Raspberry Pi. I didn’t want to get my laptop all dusty or keep it in the shop and have it accidentally get painted on or whatever, so a cheap-o computer with a monitor was all I needed.

Here’s my workspace as it was before: 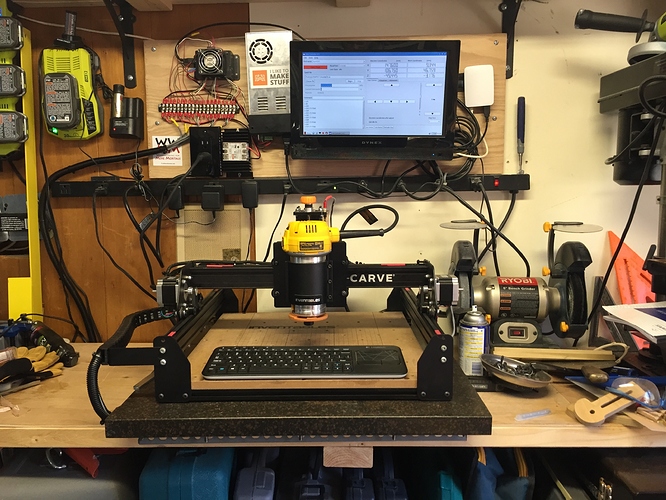 Well, I was able to do some shopping with Christmas money and I picked up a Core2Duo Mac Mini with a broken optical drive for $250, and a 24" monitor for $130.

Here’s the “After” shot: 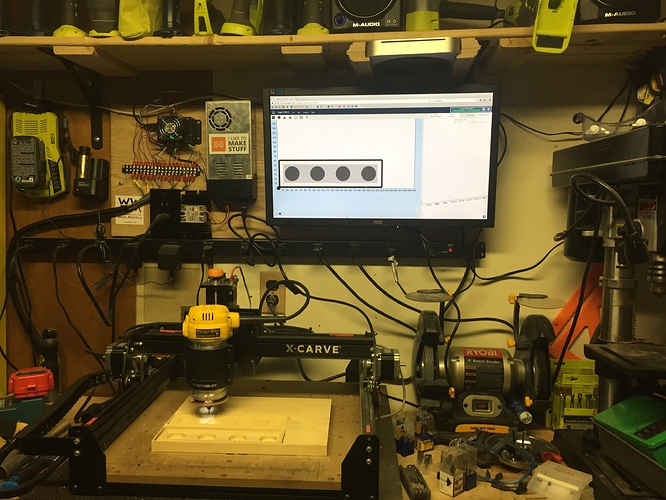 Now I can use Easel from everywhere and if I make a mistake in the file setup I don’t have to trudge upstairs to fix it, regenerate code, send it down to the Pi… I can just fix it and keep on going. The new monitor also has a much better viewing angle so I can sit down while I work, something I couldn’t do before.

I’m super pleased with it

very nice setup!! do you regret not getting the 1000mm version of the X-carve?

and how do you like those yellow ryobi tools? I have started a collection unintentionally lol

I don’t regret not getting the 1m version because I don’t have space for it. If I had a place to put it I would definitely have gotten it, but in hindsight it was a lot easier learning the nuances of the assembly and tuning on the smaller machine.

As far as the Ryobi tools, I have just about everything they make. I started with a drill and saw set a few years ago (when everything was blue and gold) and have been collecting them since. It’s tough to switch once you’re invested in a battery system, and it’s just so damn convenient to not have to keep track of which tools use which batteries. They’re probably not the top-of-the-line in terms of performance, but they work well enough for what I need.