Alrighty well I received most my X-Carve parts and pieces in early March, but with School, Spring Break, Work, etc, I’m just finally getting it put together. At this point its just an expensive Sharpie Plotting CNC but once I do some more testing, tuning, and calibration, I’ll make room for it in the garage.

I tried to save some money along the way and opted to acquire/make some of the components myself such as the wasteboard and controller and such. We’ll see how that all goes in the long term. Basically i’m just going to have random notes from my assembly below in no particular order…

For the wasteboard, I followed the PDF print and did the 144 holes and same mounting, but I opted to use 1/4-20 threaded inserts for workpiece hold downs because I always have plenty of 1/4" hardware around… Worked out pretty well and actually went pretty quick, took most of an afternoon to cut, drill, countersink, insert, drill and slot the board, but It was much cheaper and I still have over 1/2 a sheet of 3/4" MDF leftover.

I attempted to save money by skipping the Drag Chain kit, sourced my own drag chain and was going to make my own brackets and such, but eventually I just broke down and ordered the brackets, not that it would be too difficult, but the parts size and such just makes it a hassle so I probably spent just as much once i got the brackets, drag chain, and hardware together.

For the controller, I went with an Arduino and clone of a Protoneer CNC Shield. I managed to fry part of the A4988 stepper drivers so borrowed some off my 3D Printer, as I already have DRV8825 based ones en route. I have concerns about the current capabilities of the CNC Shield motor connectors, so I may attempt to desolder and put in a more substantial connector, but we’ll see. I got a Meanwell 24V 350W power supply and will build an enclosure for all the electronics once I finalize things. I did struggle to get things going at first until I figuring out how to load X Carve defaults in GRBL, after that, things went a bit smoother. It appears the Arduino Clones with the CH340G serial chip aren’t recognized in Easel (at least in my experience) so I opted to use Chilipeppr thus far. I did find one of my Arduinos that doesn’t have the CH340G and it seems to work fine with Easel using the CNC Shield instead of a gShield.

When attaching the belts, I definately liked using heatshrink on the loose end like I’d seen referenced online, made assembly a bit easier. I also opted to use and extra screw and nylock on the static belt brackets and screwed it to the back of the machine so I know the bracket won’t slip. Just clamping to the extrusion seemed a bit half assed to me.

Some of the instructions seemed to be a bit outdated and hardware didn’t always match up (or maybe I screwed up?), but between the Directions, Videos, Forum, GrabCAD models (super handy!) it seemed to go together pretty reasonably!

Definately want to look into some stiffening mods and such, but thus far I’m impressed, the real test will be once I put a router in it! 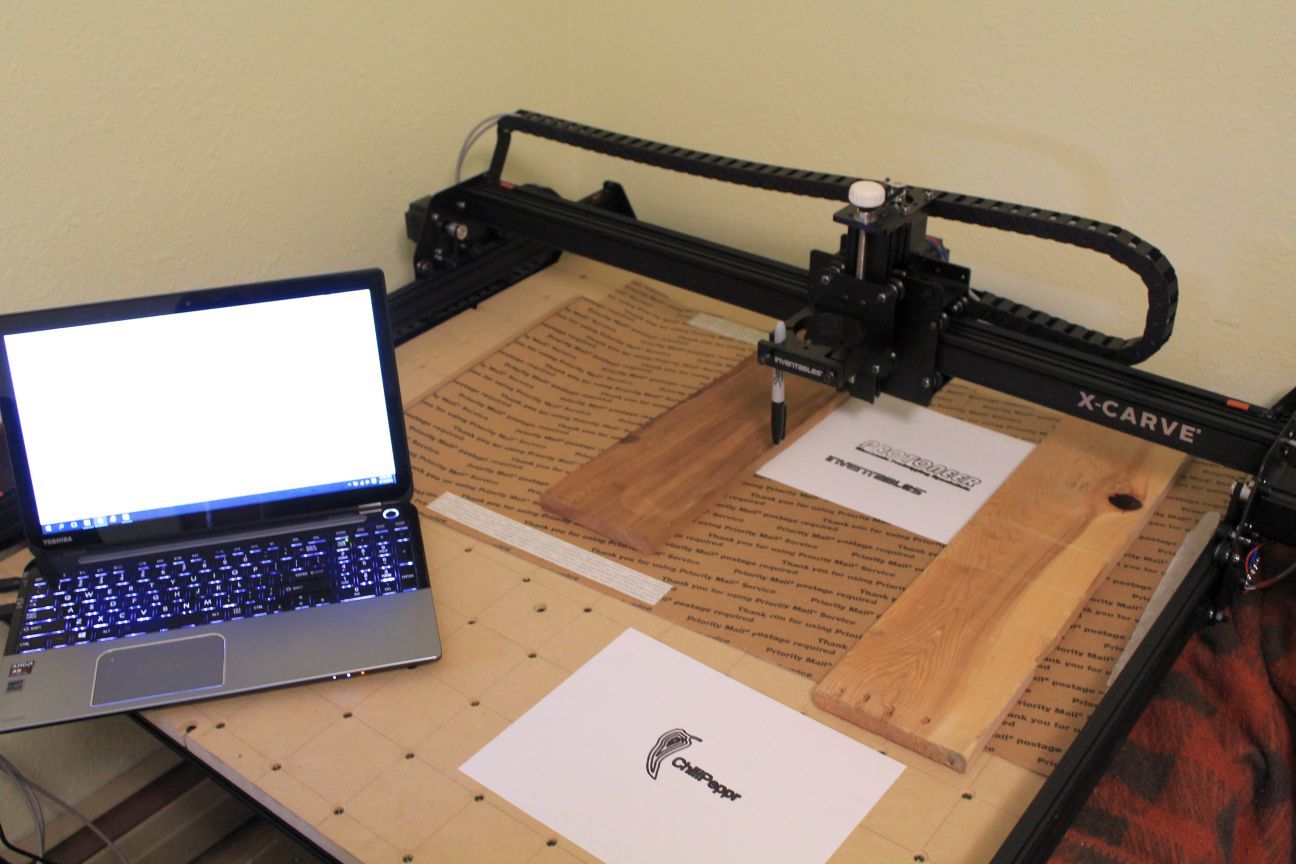