Mostly smooth cuts but some very rough around curves

I’ve been cutting MDF for the most part, but I just started experimenting with Red Western Cedar (smells so good I could eat it!). It’s hard to explain so I’ll let the picture do the talking. As you can see, some parts of the outside contour come out rough as it’s cutting on a curve. And it’s always when it’s doing the same arc position, even if it’s on another area. In other words if I did 3 circles side by side, their rough areas would be in exactly the same spot relative to that circle. I have a feeling it has something to do with conventional and climb milling, but I’m not sure. The default is Climb in Fusion 360, but if I were to switch to Conventional, wouldn’t I have the same issue on the opposite side of the circle? I’ve also noticed the issue when doing inside contours, but the rough spots would be on the opposite end of the circle. What’s the best way to work around these issues?
Thanks so much. 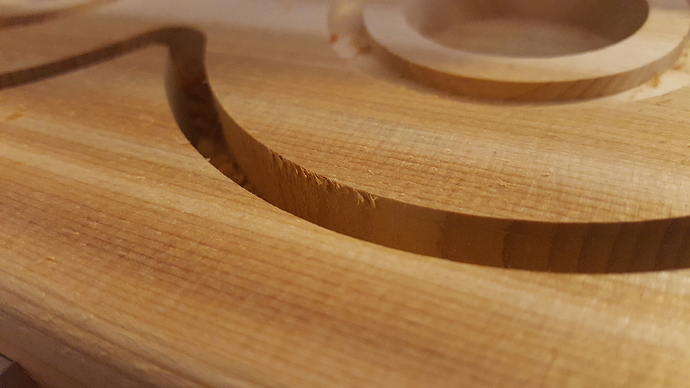 Cedar isn’t particularly hard or dense so doesn’t machine as well as other woods. Phil is right in saying this probably has to do with the wood grain itself. Climb milling is supposed to help a bit last longer, but conventional may work to help in cuts like this. Conventional milling is more than just running the tool in the opposite direction, it fundamentally changes how the tool interacts with the piece. Give it a shot. Sharp tooling also helps reduce fuzziness. Also, downcut tooling also helps give a clean top edge.

FYI, what you are calling rough really isnt. A very quick sand post cut and this will look fantastic.

Yeah, I’ve been just sanding it and it looks fine, but I was hoping to eliminate the root problem. The bit I used is fairly new and it is a downcut bit. I’ll try conventional milling and see if that makes a difference.
Thanks.

Interesting… thanks for the info! I’m trying to experiment with different types of woods. It can really get overwhelming sometimes with all the different options and combinations. I literally JUST gave in and purchased GWizard Feeds & Speeds Calculator in hopes that it might take some of the guesswork out.