I seem to be having an odd issue with my X axis. The X carriage moves fine on the left hand side of the machine but as it moves to the right it starts to struggle. So i cleaned all the rails and checked the belts and then looked at the V wheels.
With the X carriage on the left i set the v wheels and then moved it to the right. I could move it by hand just over half way until i met resistance. I loosed of the V wheels moved it all the way to the right and reset them. I could then slide it back and forth no problem, but with the X carriage back on the left of the machine there was MASSIVE play at least 1-2mm between the bottom V wheel and the rail.

It almost seem that my X rails are larger on one side than the other but i’ve had the machine well over a year and this problem only crops up now. I’ve cleaned everything so its not dirt build up and all the belts look fine. I’m a little puzzled.

ar i see your thinking that they have spread apart. However i’ve did the X axis strengthening mod and bolted a 5mm steel plate between the two rails not long after i bought the machine.I checked the fixings which goes through the rails. I even tried taken them out and running it and then put them back in and re-tighten.

I have thought about ordering the new one piece X axis but the shipping to the UK is a pain. I’m coming to Seattle in October and thought i’d get one shipped to family we have in the US and bring it back with me. Avoid some import duty as well

Sorry i don’t think i’m following or maybe i’m working from a bad assumption. Becasue of the steel plate and the fixing between the two X axis rails i’m assuming the both front and back rails are parallel to each other. If one side of the X axis rails were lower than the other wouldn’t this just effect the cut depth cross the machine rather then increase the distance between the upper and lower V wheels.

I’ve gone and ordered a one piece X axis partly because i’m grumpy today and decided to forget my bank balance and pay the $48.88 carriage to get it shipped to the UK. Carriage was not even $1 less than the part but anyway. i’ll play around with my set up tonight and see if i can get it going again.

Any idea on the dispatch time for the maker slide at the moment?

Found the problem. The rear rail had risen up slightly and the belt idler wheels were touching the rail and grinding on the makerslide 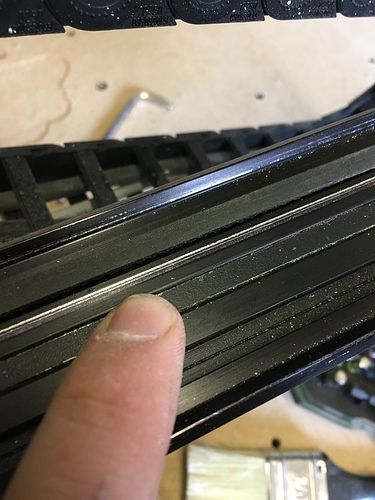 I ordered the X axis and it is awesome. Came in a few days and took a few minutes to install. 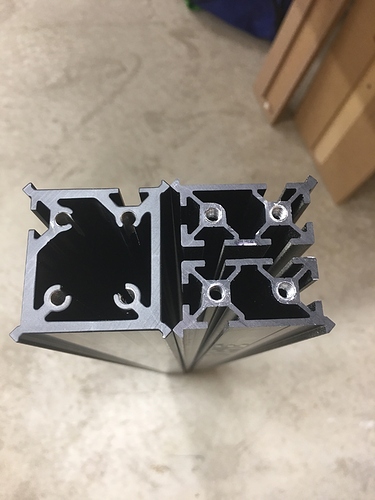 Remember to be mindful of the slot for the homing switch screw stop and that you have to flip the limit switch upside-down.

Well NOW you tell me??? Kidding.

I think I got it right but I bought the hall effect sensors for limit switches. I still have to mount them. I watched a few of your terrific videos and am definitely motivated to get them installed, homing working, the bump stop cut, and G28 going.

Anyway, got it install fairly quickly along with new eccentric spacers and it defiantly seems to run smoother in the x axis. I need to do a calibration and check everything before i cut anything but it seems good.