My best carve so far

Still have some fine tuning to work on but I was happy with the results. Dust collection is the next step. 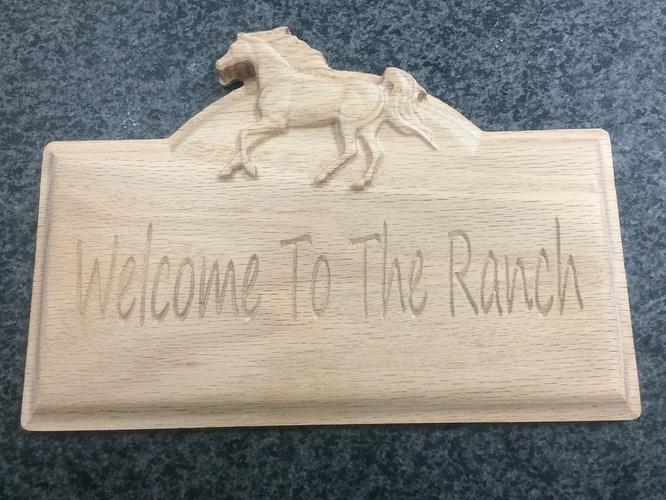 how did you carve the horse? Is this shared on easel? Looks great man!

Thank you. I used VCarve Pro software. I’ve only completed a couple projects but this was the best so far. I agree about making it shorter to reduce the depth of the side. I learn something after each carve.

Do you flatten the 3D object on the Z axis a bit as well? I’m just thinking that if you wanted a baseball or some other round object, you wouldn’t want 1/2 of it sticking out, but if you flattened it a bit (possibly 50% to 75%) and then either lowered it on the Z axis or removed the back half it would turn out ok.

Yes, exactly. I chose to raise it up to get the maximum effect. I like it but likely won’t do it again.

What bit did you use ?

I need to get one on order so I can get better detail. I purchased.0625 and .125 ball end mills with no taper just to get started.

Do you favor 1/4" shanks over smaller bit shanks?

I find speed and dust affect the quality of my cuts so I reduced speeds to 30-40 ipm on most cuts and vacuum my rails regularly during the cut. I need to write a separate post explaining some of the issues I’m experiencing.

This looks awesome! Way to go!

Nice work. I can’t wait to try more stuff like this.