I wanted to share my relay control for the dust collector and the spindle.

I was originally going to go with the IOT relay that adafruit sells, but it was a little expensive and I would need two of them (because my dust collector is a hog and I don’t want it on the same circuit as the spindle/x-controller).

So I decided to build my own. 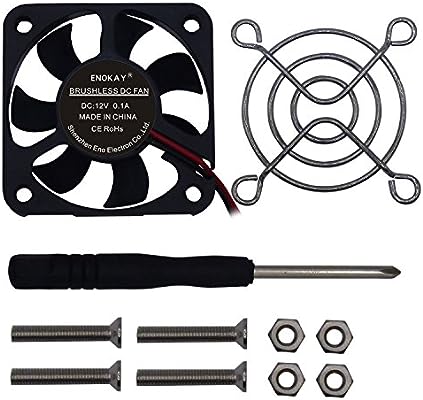 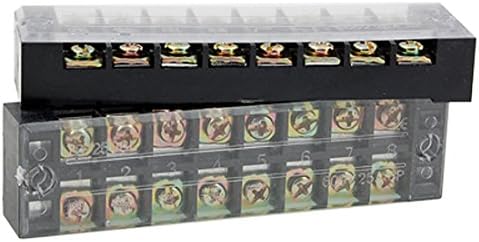 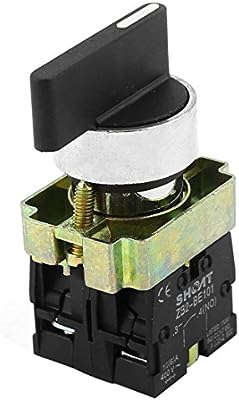 I already had all of the lugs, wire, cable grips, and an extra outlet sitting around from various projects. I used 20 awg wire for the control signal and 14 awg wire for power.

The build:
I made the box out of 1/2" pine using the box maker app in Easel. I made cutouts for the cable grips, the control switches, the fan, outlet, and some ventilation holes.

I split the outlet by snapping the tie-in clips on the hot and neutral plates. I wired everything per my (poorly drawn) schematic below.

Hope this helps someone get automatic control without spending a ton. 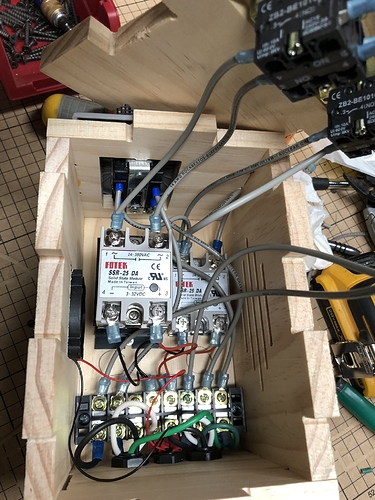 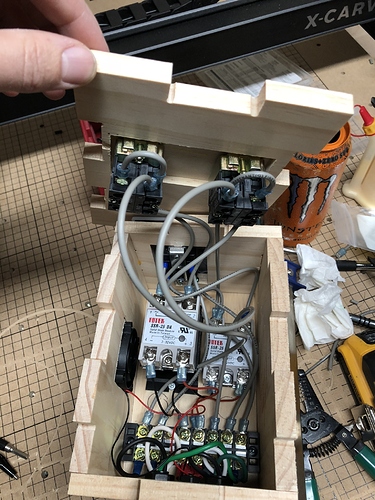 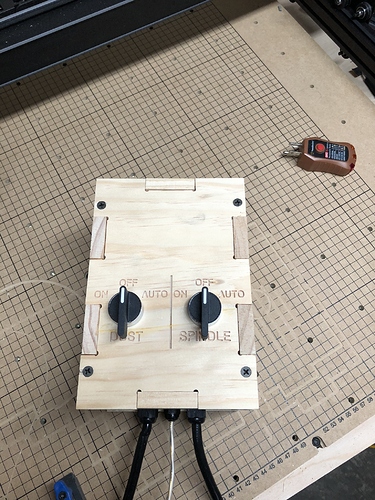 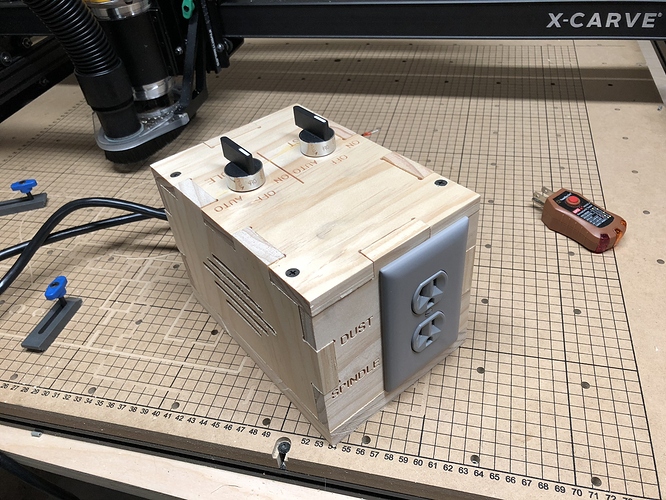 EDIT:
I had some bad information and the control signal is not +/- 24v. The relays work just fine, but I need to put the fan on a separate circuit.
Luckily I have a bridge rectifier and some buck converters laying around. Back to work. I’ll update this post and the schematic when I’m done.

Ok, I’m not the best at reading schematics, but it doesn’t make sense to me.
I really like the idea that you can turn either devise on or off.
but I don’t see how your getting power to the switch when its in Auto mode.
I have the IOT relay with both my spindle and dust collector plugged in and on its dedicated circuit.
I have all other electronics on their dedicated circuit also.
But I like your idea better.

I would like to make one like this, but I need to better understand it.
I really like the idea of being able to manually turn on the dust collector for clean up.
I also would only have a single 120v input from the dedicated circuit that I already have.

Looks good. Just get a heatsink for the second SSR to be safe.

In schematics, a relay is designated by K. In my case I have two relays and they are both actuated by the control signal which then shuts the associated contacts designated by the two parallel lines in my main power circuit.

So when Ka gets power from the X-Controller, it will shut it’s contact and allow the power to pass through to my outlet. I hope that makes sense. I can come up with a block diagram instead of an electrical schematic which may make more sense to people.

Looks good. Just get a heatsink for the second SSR to be safe.

The 611 only pulls a couple of amps and won’t heat up the SSR to above room temp. I put a fan in there as overkill.

I made a block diagram which better shows the connections I made. I removed the fan circuitry to keep the drawing uncluttered.
Let me know if you have more questions. 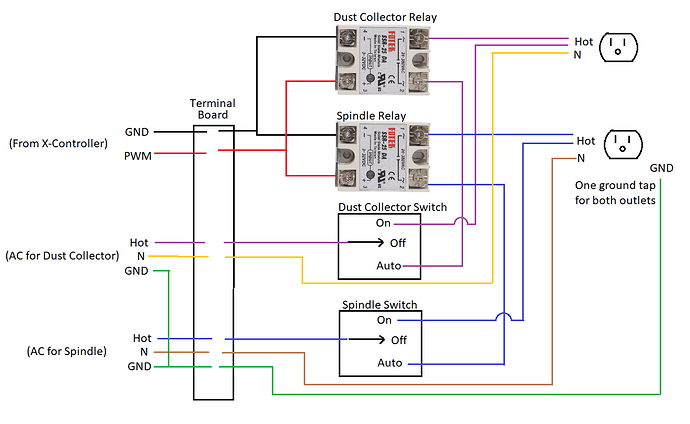 I saw your schematic and I agree that it could be wired to let the relay do all of the heavy lifting, but it doesn’t make much of a difference one way or the other so long as your switches are rated for it (mine are).

The way I wired it keeps me from having a transformer/rectifier in there and a couple of diodes, although your design would lend itself to a cooling fan more readily.

I found out that the output from the X-Controller will not run a fan, so I made a quick rectifier bridge and used a buck converter to step the fan down. It’s not the cleanest DC, but the fan doesn’t much mind.

Big fan of your posts by the way. You’ve been quite helpful with getting me started. I’m sure I’ll be referencing your posts quite often in the future.

You should read this regarding SSR’s and inductive loads:
https://www.phidgets.com/docs/Solid_State_Relay_Primer

Basically, the spindle and dust collectors are inductive loads. When they turn off, they can release high-voltage spikes. You’ll need something to suppress those spikes, such as a metal-oxide varistor (MOV). SSR’s are vulnerable to events like these.

I built something very similar and it was working just fine for about a month. Eventually, the SSR shorted out. When this happens, they tend to stay in the closed position… it also started sparking and lit up bright orange.

Next time I have to work on my electronics I’m going to use one of these contactors.

@TreyBillings
Great article! The overall load of the circuitry puts me well below the ratings of the SSRs, so I feel confident that everything is ok.
I have entertained the idea of a metal enclosure just to bring things a little closer to a NEMA standard. Right now, if something were to go wrong, I have made myself a tinder box. So it looks like my next project involves some metal fabricobbling.

I did a little bit more searching around and figured that I would need an MOV with thermal protection. When the MOV goes bad, it goes bad in flames.
Mouser electronics has a good selection.

@LarryM
I was leaning away from the mechanical relays and contractors. Since these are being used in an environment with plenty of sawdust, I didn’t want any arcs. I have a filter screen on my box, so that should help, but SSRs were my preferred method.

@RobertCanning
I read a few articles on faux foteks and found some alarming issues. The most common issue is their party distributors will buy lower rated foteks and slap a higher rating sticker on them.
When I remake my control box, I’ll probably spend the extra money and get the crydoms. The peace of mind will be worth it. Plus some models have the MOV and thermal fuse built right in.

Here is what I did for my control box, but it only controls the dust collector. The spindle is on a $30 IoT relay sitting next to the xcarve. 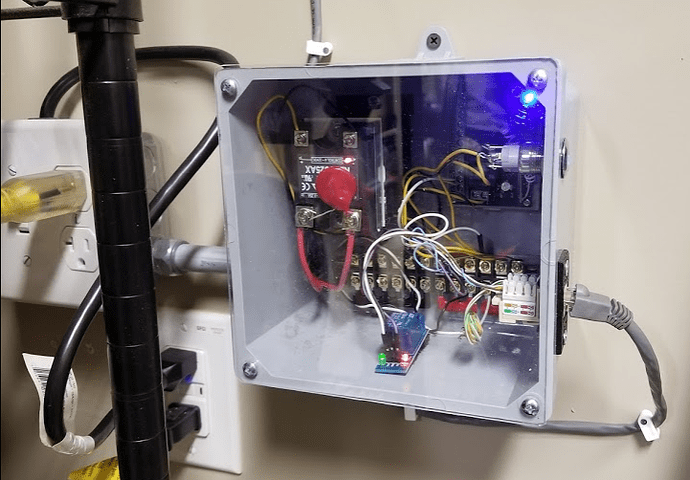 I separated the ac portion into a 2-gang metal box to keep it up to code(ish). The yellow plug there is my dust collector on the other end of the garage. The switch acts as a manual off for the ac circuit. I decided to wall mount it here because my garage has a dedicated outlet here for a freezer.

The rest of the electronics (including the ssr) are in a pvc jbox with a plexi cover I added. Inside there are 3 methods to activate the ssr: push button, wireless remote, and from the xcontroller (plugged into the ‘mist’ output). The low-voltage portion is powered by 12v, which I tap off of an old transformer plugged in next to the x-carve. The mist output on the x-carve controls a high trigger relay. 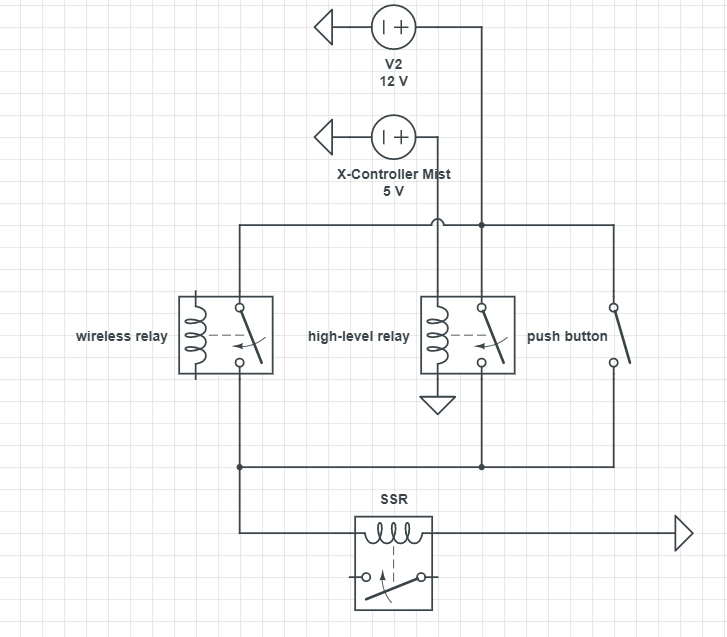 Nice setup. I like the multiple options you’ve incorporated.

Can you recommend a varistor size for a relay controling the 2hp dust collector?

I don’t know enough to recommend one

I use this ssr, which includes the varistor
https://www.phidgets.com/?tier=3&catid=46&pcid=39&prodid=574

The varistor included is
TMOV20RP200E

Boom ordered a pair Thanks!