Thanks to @PhilJohnson for the title inspiration and for the tips he was able to send my way.

I was looking to carve some rosettes for some products that I am working on. I modeled the project in Fusion 360. I sketched the cross-section in 2D and used the revolve command and then added the stock and tab pieces to hold it all in place. (Having a lot of background with Autodesk products helped, but what I wouldn’t give for a traditional Autocad Osnap…) 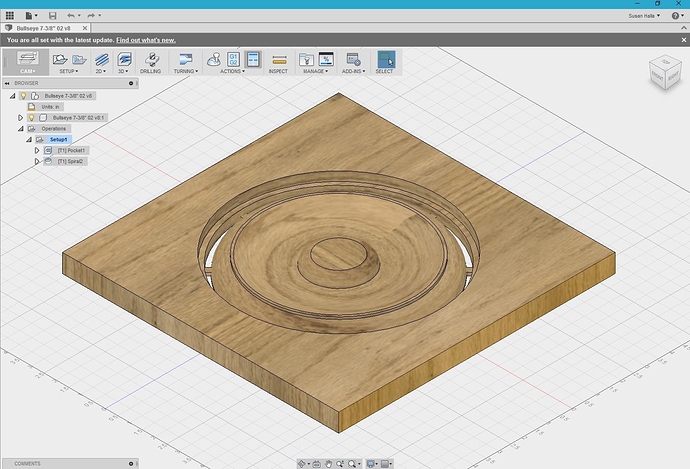 I created the CAM operations in Fusion (two of them) and then used the Easel post-processor to create the files for import. I then sent the two separate processes to the machine through Easel but then decided that I needed to do a third pass (more on that in the particulars below). I’m running a 1000x1000 X-Carve with the Dewalt 611 spindle. I haven’t done any of the stiffening mods since so far, knock on wood, everything seems to be going okay. Of course, this is only the second thing I’ve done with my X-Carve… Here were my CAM processes and the bits:

In retrospect I was stupid for doing a parallel pass on a round object so I did a third pass and manually lowered the bit to take just a little more off the top. I used the same bit and speeds as Pass Two but did Pass Three using the Spiral CAM setting. Worked pretty awesomely. The next time I try, I think I’ll do passes one and three and skip two. 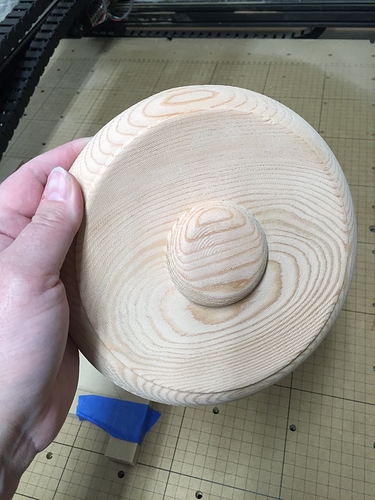 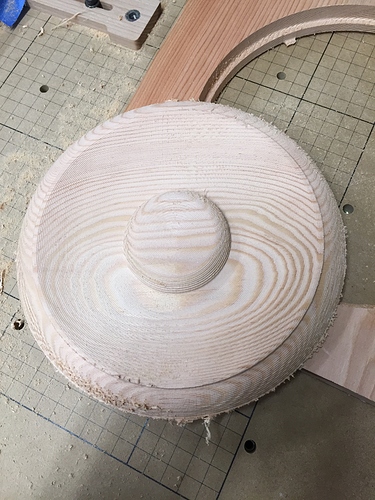 Now the questions. While it’s not TOO bad, there are quite a few scallops to sand out. I just did it by hand, but if I (hopefully) have to start making these with regularity for products, I’d like to start out with as smooth of a carve as possible to minimize any sanding. Any suggestions on what I’ve used for settings / bits?

I thought about using a sanding mop on my drill press to sand, but having not used one before, I don’t know if it would do a very good job on a shape such as this. Any sanding suggestions?

While it didn’t take too long, (maybe two hours all told) any suggestions for speeding this up? I haven’t tinkered enough with the X-Carve to find out how fast I can go and I don’t fancy breaking bits to find out.

Thanks for any suggestions in advance - I’m totally new to this and learning as I go. I thought I would tap the Inventables brain trust for some additional guidance.

Here is a thread with my own 3D fumbling

Continuing the discussion from 3D Dragon carve in red oak: Any thoughts or input would be appreciated. I have been having some issues with "ripples" in the surface of 3D carves. Other people have mentioned having them when they cut too fast. So ultimately slowing down will probably be the fix for the issue but I want to try to figure out what exactly is going on to see if it is a symptom of an issue I can fix. So I have started to run some carve tests to see what settings and strategies will…

Which bit you used for the third pass?

Looks really pretty! I don’t know much about bits but I am going to order these ones you used

how did you changed the bit without altering the position?

@AaronMatthews that’s a lot of awesome info and a lot to digest. (And a lot that went over my head, admittedly). I think most of what I have are just plain scallops except for where I think the parallel cut just tended to cut a little deep where it was running coincident with the grain. Fir is a bit soft so some of that I might not be able to rectify. I’m using fir specifically since these are for exterior doors and thus the wood needs some chutzpah to stand up to weather (albeit protected and painted) but also needs to be relatively inexpensive to buy. I’ll have to see what happens next time when I run passes one and three and leave out pass two…

I have found that sometimes using a smaller ball nose is not actually better for surface finish. Especially if you do not have very fine details. If you have access, you might try an 1/8" ball nose. Here are some examples of what I have done with an 1/8". I have a 1/16" ball nose but I have never used it. I did very little surface sanding on these, just a bit of hand sanding with a 220 grit soft sponge. 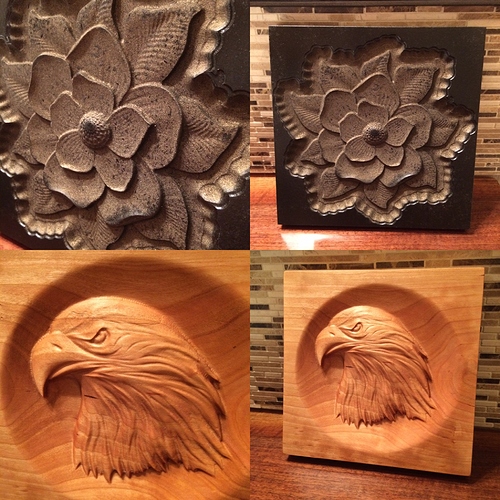 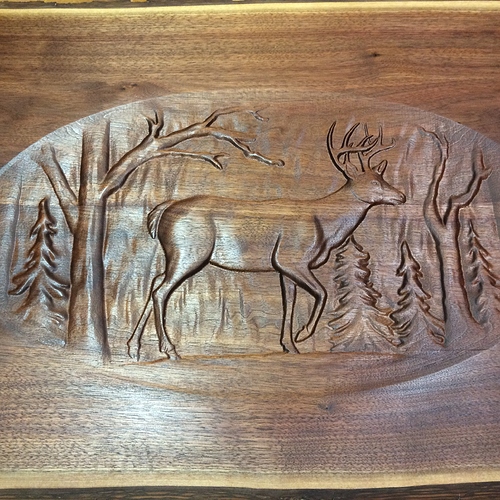 @BlairHarp Holy moly! Yes, I do have an 1/8" ball nose. I will definately have to try using that exclusively. (It would certainly make things easier as the pass one pocket clearing was performed with an 1/8" ball nose and then I wouldn’t have to change bits for pass two.)

What step over do you typically used on your carvings using the 1/8" ball nose?

I use V-Carve pro to generate the tool paths, so it might be a different function for you but I use a 3D roughing pass with a 1/4" standard end mill to remove as much waste as possible. Getting as much waste out of the way as possible seems to help a lot with any deflection and reduces the risk of breaking a bit.

I don’t have a ton of bits yet, so I used what I had to see how it would go. I’m going to take a combination of advice and try it again to see what a few different changes might look like to the final product.

I’m presuming that by using the larger bit with the 10% step over should smooth out the scallops but will add time to the overall milling process. But if that is time I can save from sanding to a final finish, it’s still time saved to me.

In my experience, though not a lot with 3D to be honest, those ridges are generally caused by 2 things:

Too much stepover, and wood deflection.

The first one is pretty easy to fix, just change the stepover value to like 10% or less. The second one can be fixed with a shallower depth of cut.

stepover needs to be 5% for smooth-right-off-the-machine finish. 10% will leave slight ridges.Off course you’ll need to weigh smoothness vs machining time on this one. But these are the ballpark percentages to use.

‘material left on part’ for the roughing pass doesn’t need to be low, make it 1 mm or even more. When choosing this value too low, a hair misalignment in the re-zeroing of the Z after the tool change will leave the roughing pass visible. And since you’re using a really small stepover, it will not put much strain on the machine even with that value set relatively high.

This is a good article. Larger bit, better. Too little step over is a waste of time (below 1/8th diameter). Again, lots of opinions, many quite strange, but this article really helped debunk some of the myths. How To Choose a Stepover for 3D Profiling - CNCCookbook: Be A Better CNC'er

depends on what you define by ‘time’
Taking a small stepover will add machining time, but save you manual sanding time.
Some people -like me- are perfectly comfortable having the machine work 2 hours longer if it saves me 20 minutes of manual sanding.
I hate sanding.

1/8 diameter will get you far, but nowhere near smooth surfaces.

I don’t know where my head was. I used a 50% step over. I read that somewhere but that must have been maximum step over. I can’t wait to try again.

What step over do you use for roughing? Would 50% be appropriate there?

Agree with you 100% on the manual sanding, @anon68752607. I have rheumatoid arthritis and there’s not a day that I wake up that my hands aren’t swollen. Still have to use them, but not if I can help it!

If you take a fixed stepover, tool diameter increase will decrease the scalloping. However, using a procentual stepover, scalloping just grows with diameter.

This is a great diagram. Thanks so much @PhilJohnson.

I’m going at it again with an 1/8" end mill with a 40% step over (pocket clearing) and an 1/8" ball nose (spiral) with a .006" step over (5% of bit diameter). It’s actually a slightly different carve (trying out different rosette profiles) but should still show me (especially in the dished areas) if I’m on the right track.

What are your opinions on bull nose bits? Would those reduce scallops on horizontal surfaces while still allowing smooth curves?

I have found that tung oil finish does a nice job of toughing up the softer woods like redwood and ceder.