My first attept at a 2 part carve 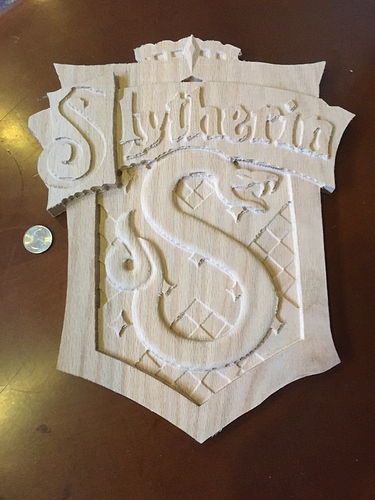 IMG_2910.JPG2448×3264 1.42 MB
.
It worked pretty well considering I was just guessing a feed rates. There are two spots of “burn” on the wood (oops)
I just got a CNC cookbook free trial so I can work out some better feed and RPM rates 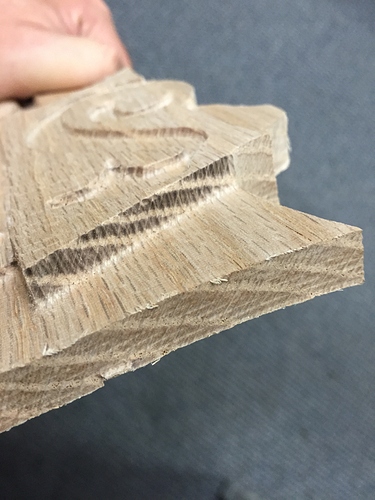 You can see on the bottom edge of everything still has the rough cut. 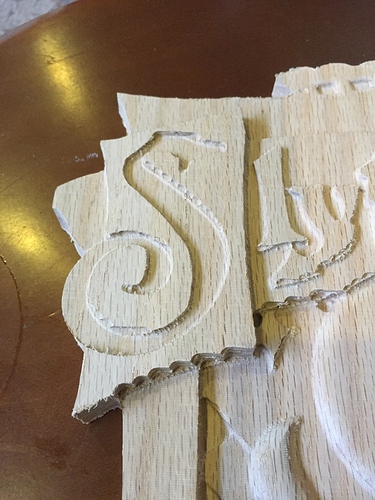 Maybe during the quick move back to Zero after completing the rough cut?
I may have knocked it out of zero as I was changing bit?
It may have occurred when soft resetting UGS so I could load the next file. (I plan up updating mu GRBL and UGC before trying again.)

On the whole I am happy with how it turned out. Now I just need to dial in my settings better.

With so many alignment issues with the XC I have a new motto:
“Shift Happens”

More likely I see chattering on that edge. Seems you’re diving bad. Make your dept a half way shallow and recheck your V-Wheels tidiness. All I learned is depth setting must be .15 or lower on hard wood. Otherwise your Gantry will flex and start chattering. If you’re running Ball nose bit for 3D decorates, must be area cleaning tool path first.

Alignment aside. this is a really cool plaque. Good luck with #2

chattering on that edge

I took a close look at the carve. It isn’t actually chattering, It is actual a byproduct of the cutting strategy I was using.

On my earlier cuts I was getting some weird “extra” cut lines using the standard spiral cut so I switched to raster style to see how that worked. (I am now pretty sure this is due to the x gantry flexing)
With raster style each cut is a single side to side move. When you see them all layered together the separate ends of the cut lines it looks a lot like chatter,
Now I know why to use spiral. As it gives a much cleaner cut overall

Update:
I competed the stiffing mod and updated both Grbl and UGS.
(That took a bit more effort and time than I expected)

The updated software worked properly. Each file ending without error.
The first cut and second cut lined up fine!

I got a trail copy of CNC cookbook and tried to get it setup.
The numbers I was getting were shockingly low.

I went ahead and used the cookbook numbers for the 1/4 roughing pass. It took almost a hour but came out fine.
I noticed that the cut was very quiet. The “whine” of bit in wood was not noticeably audible over the sound of the router and shop vac.

But for the final cut I decided to push the envelop and dramatically increase feed speed. Which was still lower that I had successfully cut Red Oak before.
The cut turned out pretty good, though the “whine” was noticeable. There are a lot of “fuzzies” on the cut and I noticed that the cut in general are not a smooth as I have gotten before.

IMG_2928.JPG2448×3264 1.97 MB
.
There is some noticeable heat discoloration where it did some plunge cuts, so my plunge rate was way too high.
So it looks like I was too aggressive in my feed rate. 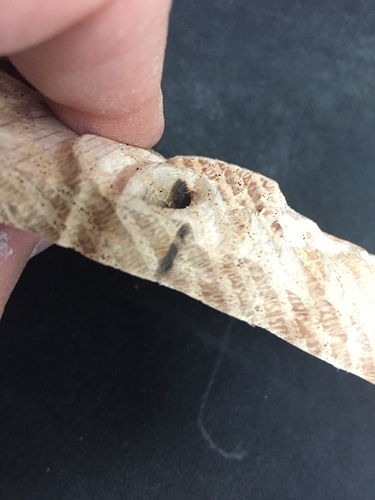 IMG_2929.JPG2448×3264 1020 KB
.
Though I noticed that with this particular piece of Red Oak the grain is not as tight. It has tiny holes in the grain, like air bubbles. So some of the coarseness of the cut could be from the wood?

On the whole I am very happy with how the 2 part carve turned out.

Update on CNC cookbook
I figured out my shockingly slow speeds. Mixing metric and imperial units!

Omg I need to do a slithering shield that’s amazing!