I wanted to share my first cut – after getting my machine assembled, then waiting on making a table for it (I needed a fol down table to maintain parking in my garage!) …I finally got cutting! 4 signs so far, nothing terribly fancy with v-carving. Getting a feel for it still. I wanted to share. 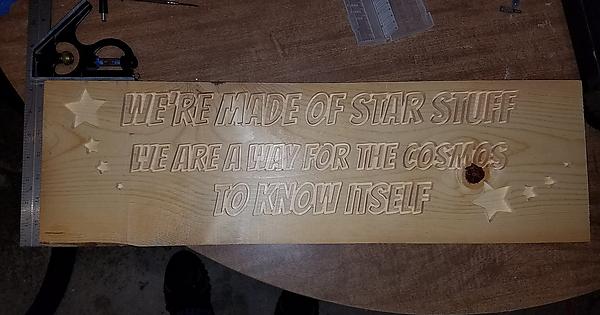 Thanks! Still trying to figure out Easel, and I’ve been playing a bit with Fusion 360 to see what I want to be using. looks like longer term it will be Fusion but the controls require a lot more. I started setting up my bit library, got bored matching bit settings vs specs from the bit and put that on hold so I can get the cut.

In terms of the cut, it was a 1/8" 2FL upcut bit. I think the "W"s were too narrow (not tearout) on the second row of text but I didn’t see any red in easel so I went with it. Looking at it now, its just flat out missing 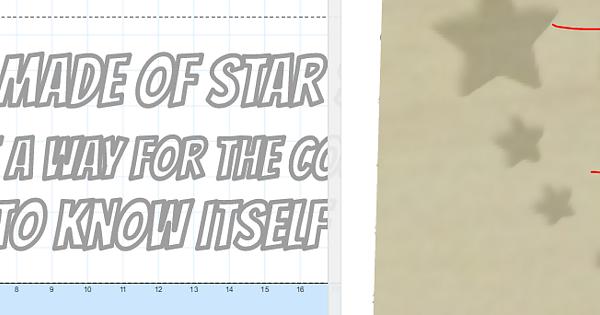 This took about 2 hr 15 min at the default speeds/feeds listed for “birch plywood”…namely because I didn’t see a setting for Pine and didn’t dig online to find settings for Pine.

Experiment and see what your machine can do, as well as what you are comfortable with it doing.

That is an awesome first piece!

The first cut is the deepest

lol isn’t that the truth. Once I clicked CARVE! it was committed and I quickly realized it was 0.3" not 0.3mm. Going to have to switch my workflows a bit from 3D printing because I don’t want to rebuy tools around the shop. Little easier going metric when you start from nothing. Subtractive is a bit different

Thanks! I certainly didn’t want to push my bit on the first go-round!