I have always been going to make an edge lit sign, but have not had time up to now.

I decided I would make one for my brother for his birthday, and picked out a picture of a Space Marine as my brother is into painting Warhammer models.

I used some 3mm Acrylic I had from another job, and used a nice chunk of oak for the base.
For power I actually used the power adapter for an old router as it matched nicely with the LEDs I used.

It wants a clean as some dust made its way under the protective cover during sanding, but I’m leaving that for the morning.

Just for scale the acrylic was 100x200mm 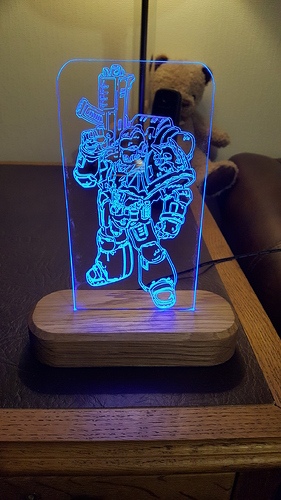 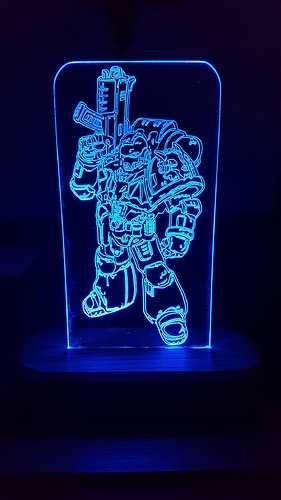 Nice. I need to learn how to do this.

I just found a file and tried as both a v carve, and outline engraving 0.3mm with a 60deg v bit. I liked the engraving better so went with that.

I had some LEDs left from an old pc build so rigged them up to a 12v plug and then cut a pocket and a slot for the LEDs/acrylic. I cut a small slot for the cable, and stuck some blue felt on the bottom.

Cheap and simple, but I really like the effect.

I need to find a source of cheap acrylic.

A lot of those LED signs have power cords. I only have abasic understanding of electronics, but wouldn’t it be possible to just use a 9V battery, 12 LEDs and some appropriate resistor to achieve the same cordless?

Just throwing it out there bc I am maybe going to try this someday soon.

Looks great. lots of detail to it

Depending on how hot you run the LED color, you might get a solid day out of a 1000mhA lithium rechargeable. I run a little desktop sign for several hours (2-3hrs) at a time over multiple days before recharging. It uses an Adafruit rechargeable lithium pack and a DC to DC boost converter to get the 3.7 volts up to 5V which runs an Atmel ATtiny85 micro controller chip. That controls a rainbow flow of colors across 5 RGB LEDs. The Attiny85 chip does have a sleep mode that uses really small amounts of current. You could setup a motion sensor to turn on the LEDs when someone is actually in the room. Play with the timing of when the sensor takes a reading and you could run on battery for several weeks.
Video here: https://goo.gl/photos/4ttgcjyiUCfaHDvN7
That one is laser cut cast acrylic. I’ve got other acrylic stuff cut with the Xcarve, but they are not battery powered.

This is awesome! Great job I have trying to get a template to start with my own projects but haven’t been able to get one. Can you post yours on the inventables project page? Thanks

I’m afraid I didn’t use easel for this, although you easily could (I haven’t actually ever used easel to be honest).

Thanks for replying what program did you use to the create the image onto the acrylic?

I used Aspire to make the design/gcode, then I used picsender to send it to the xcarve as that is what I use for a machine controller.