I did my first test cuts today… very exciting!

Try one was on some MDF. I did a square and a circle, and they came out exactly the size I wanted. I stopped the square from cutting to full depth as I already had the info I wanted. 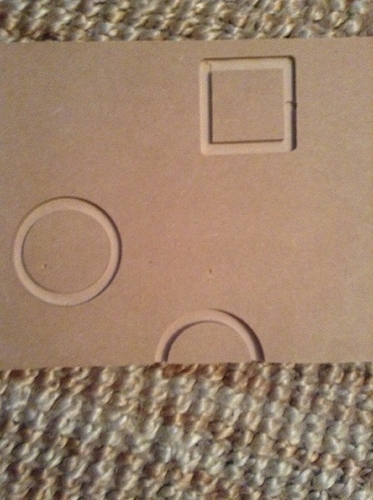 Try two was on some 5.5mm thick scrap wood I had lying around. I tried using the Easel inlay generator. Here are the results: 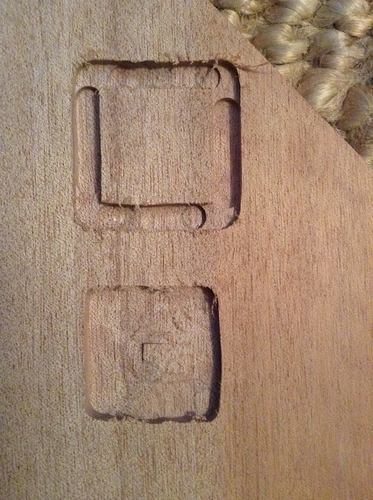 I have no idea why the squares didn’t turn out square on the wood (but were fine on the MDF), or why the Z axis was all over the place. Does anyone have a similar memory in their X Carve journey they found a resolution to?

I thought that the inlay app purposefully has the edges rounded?

Do everything Robert suggested. Especially check the set screws on the ACME rod.

I tried to move the Z up/down, but it wouldn’t budge (with the machine off). Also, the cuts on the MDF were perfect, it just went weird on the wood. So I’m not sure why it’s so off.

Can you define “slip” for me Phil?

I just went around all the V wheels with the wrench, and tightened them all to the point where they would stop spinning with one fingertip. I noticed the gantry could shimmy a bit diagonally before, and now it feels a lot more solid and doesn’t move diagonally when I put pressure on it from each end.

I’ll see how I go with another test cut in the (Australian) morning, when I can make noise again. Maybe the reason the cuts were precise on the MDF but not the wood is the resistance in the wood grain was greater? Thank you for the advice.

Check all the things mentioned above, they could be the cause of the distortion in the second carve.

The X-Carve cannot cut square inside corners, the tightest radius you can carve on an inside corner is the radius of your bit. When you use the inlay app it creates a piece with rounded corners to put into the hole it makes with rounded corners. It also puts tabs on the piece to be inserted so it doesn’t fly away and get caught in your dust collector. That accounts for the raised parts. You didn’t set the wood thickness or maybe the zero-height was off, as the top piece cut should have gone through to just touch your waste board on the contour everywhere except the tabs.

“The X-Carve cannot cut square inside corners” I know. That’s not what I was talking about.

“It also puts tabs on the piece to be inserted” I know that too.

“You didn’t set the wood thickness” I did.

“maybe the zero-height was off” It wasn’t.

The problem is, the Z height wandered all over the place on wood, but not on MDF. I have since followed Phil’s advice and tightened everything. I had already squared it all. X and Y axis slippage would explain why the sides of the squares weren’t at 90 degrees to each other, but not why it only happened on the second test.

If you are going to move it by hand (and I strongly advise against it) do it very slowly or you will damage the controller.

Another great bit of advice, thanks Phil. I had already carefully squared up the machine when I put it together, but I’ll keep an eye on it over time to make sure it doesn’t slip.

Tight nut on the zaxis. If you didn’t Pre-Spin the screw/nut with a drill a few times before assembly you won’t get smooth action. Very common for brand new machine.

Now that it’s assembled, just home it, then jog up and down the length of the z travel, assisting when necessary until it runs smooth.

“Now that it’s assembled, just home it, then jog up and down the length of the z travel, assisting when necessary until it runs smooth.” OK, I’ll give that a try… thanks!

Pre-spin. Not idiot. My phone had auto corrected it. Thanks apple…

Did you get a small bit of grease with your kit?

I did! I wondered what that was for haha!

I wondered what that was for

I had the same question.

wheres it go? is it for the z-axis screw?

Was there a consensus on whether using that lube around sawdust is a good idea?

@PhilJohnson said no.
WD-40 makes a dry lube that comes in a can w/ a yellow lid.
There are other similar products that you can get from a bicycle store.

Thanks Jeremy. I’ll try some dry graphite or that WD-40 on it and see how it goes.

That made a world of difference, thanks for the suggestion! 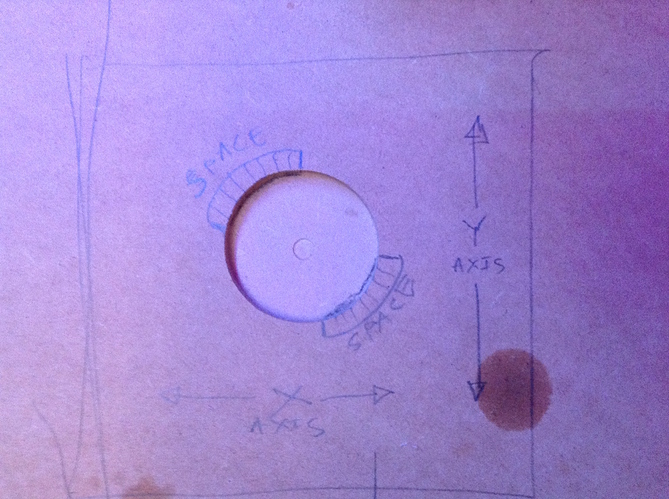 Since your circles are uneven in the 2nd and 4th quadrant => you have some slop on your Y axis.
During transition from Y to X the bit fall behind , carving out to much material in Y relative to X position.