Full disclosure, I’m a noob with the x-carve. I just put it together last weekend and am just starting on my journey of making some things. I’ve enclosed some pictures of my 2nd carving project (the first being an MDF based project). There are several issues I’m hoping to get some advice on. 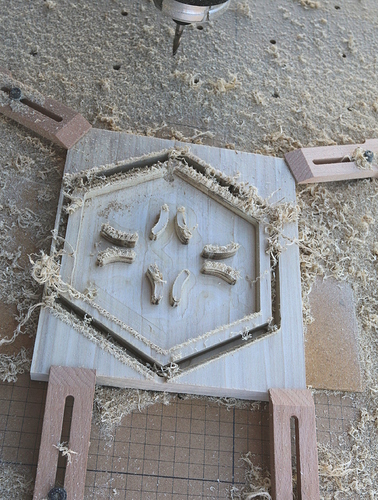 The first issue is relatively minor as it’s easy to clean up, but I’m wondering about the large amount of fuzzy strands clinging to the upper edges of the cuts.Is this an indication of improper spindle speed? Dull bit? feed rate? 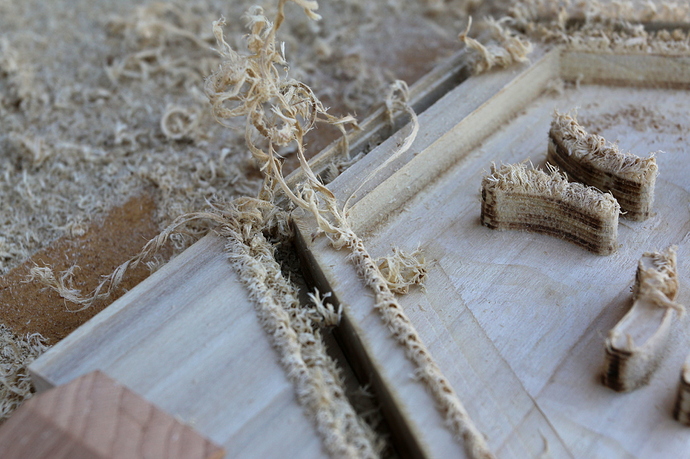 The next issue is burning of the wood. I assume the spindle speed is too high? But maybe again it’s a dull bit after an hour of use on MDF? What’s interesting is the burning mostly occurs when the bit is moving in the y direction but almost no burning in the x direction as seen below.

The next issue I noticed was the bit becoming miss-aligned when it’s raising and lowering, resulting in a gouge in the wood. Once the bit starts moving forward again the misalignment goes away. This is the worst gouge, but it occurred in several places. In this instance the up and down travel was a result of placing a cut out tab. 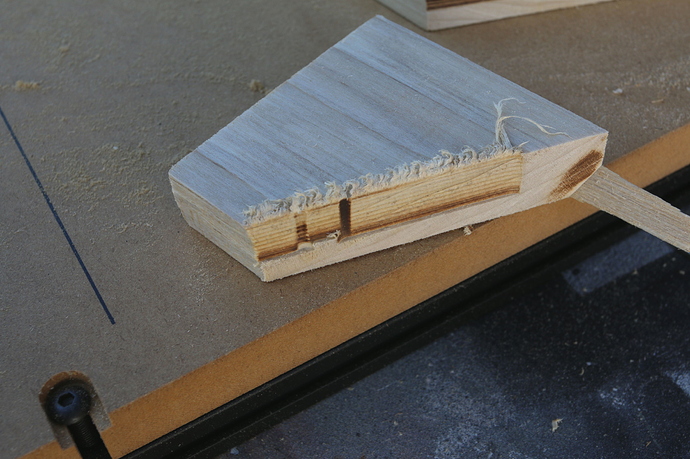 The last image shows the bit with obvious signs of getting hot. Was it spinning too fast or was is it dull? 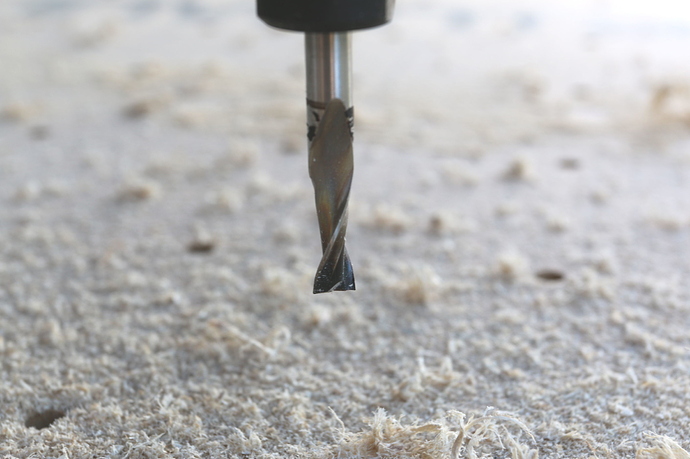 At this point I’m greedy. I’m looking for setting that will allow the fastest cuts, best quality and least amount of wear and tear on the tools. I suspect there will have to be some compromise somewhere.

Along the lines of speeding up the job, Easel does a terrible job of optimizing the paths. There were lots of “air cuts” where the spindle went back over areas it already carved. The amount of overlap in cuts appeared to quite large as well (maybe 80%). I can see doing that on the final pass, but when it’s removing large amounts of material I would think it could cut faster by minimizing the overlap. Unnecessary raising and lower of the spindle at a painfully slow rate was also annoying. It would be nice to raise quickly and lower slowly at the very least.

Easel is great for simple jobs. It’s very easy to get started with, but I think I need to start looking at alternatives.

Thanks for any feedback you can give!

I’ll try my best to answer a few points!

Fuzzy edges are due to your style of bit and feed/speed. Upcut bit will more than likely produce fuzzy top edges. Try a straight flute, down cut or compression bit.

Your burning could be caused by your feed and speeds. What speed setting is your router at? Most people seem to leave theirs at 1 (approx. 10000rpm I think on the Dewalt). Also 30ipm seems pretty slow, but that depends on you material.

Your gouging/misalignment might mean you need to up your stepper pots. Is it happening only on you horizontal cuts? Eg the Y direction? I’m not 100% sure about this, but it could be a start.

Sorry, just saw that your routers at 2.5. That might be too fast, especially at 30ipm. Either try to speed up your feed rate, or slow down your router.

poplar is prone to shredding like that, a downcut bit will help a lot

I would use Poplar with this configuration;
60 ipm
.1" dept
Two flute longer spiral bit
Plunge rate 20
Step over 20%
RPM dial 4

I use poplar for 60% of products I’m running.

You may want to change these settings and try again. That bit is already burned. Try using longer bit. As I can see that, your bit is too short, shank is rubbing to material. If you see any chattering or hesitation, check your X rail if any flex, even V Wheel alignements.
Also you’re saying .05 dept, I see more than that.
Going slow is not gonna solve your problem. Speed up on RPM and Feed rate to get rid of chip load.
One last thing, always use conventional cut for poplar, Climb will chatter.

Thanks for the feedback guys. I’ll try again tomorrow (if I can find a new bit in this little town).

So i had to look up conventional vs. climb. I didn’t specify a direction for the cuts, and it appears Easel generated most of the paths using conventional. The site I looked at for a definition indicated climb would give a better finish. It also indicated climb milling tended to cause bit motion perpendicular to cut motion sometimes causing chatter and potential dimensional errors in the cut as pointed out by Alan.

Thanks again for the help guys. There is some contradictory advice so I’ll try some things and report back.

I agree with Alan, although I would not worry about the bit as it stands. The carbide bits can take a lot of heat. What you’re seeing there is burned wood rubbed onto the bit. You can’t cut deeper than the flutes are long, unfortunately.

I have gone to a down-shear bit for that kind of work, and it really helps. Your DeWalt can handle a LOT higher settings than that, the burn (as previously mentioned) is because you’re beeing too tentative. PUSH that bit through the wood! Alan’s settings sound about right, that’s more or less what I’d be using myself. I use a larger step-over, though, I generally use 50%, and cut about a quarter-inch deep a pass. Might back off to 40ipm with that, but you’ll have to play around with it a bit. Definitely much deeper bites, though!

I have had no luck with climb milling in any material, the X-carve is just too flexible.

So I’m trying some things out today. Speeding up the feed rate really helped with the burning plus I don’t have to wait so long for the part to finish.

I tracked the misalignment to a loose v-wheel in the z axis mounting plate and to rotation in the gantry. Both issues were/are causing the bit to tilt when pushing through the material then to relax back when stopped or moving strictly in z. I fixed the loose v wheel, but now that I’m pushing harder through the material the gantry twist is more of an issue. I plan on doing the stiffening mod, but want to make a few things first. I may have to resort to slowing down the feed a little and also reducing the spindle rate to avoid burning.

Another issue. Since I’m pushing more material the chatter is becoming much more noticeable. As predicted, there is almost no chatter when going conventional and significant chatter when climb cutting. The problem is Easel is using conventional for outside edges and climb for inside edges. I don’t think I have any say in the matter. Is there a setting in Easel to control this? If not I would be interested in what tools you guys might be using to generate the g-code. I dread the thought of hand optimizing the code.

You are on right direction, do the stiffing mode, you will eliminate chattering. Because bit pushes gantry opposite direction, if you have no flex, bit will cut with no choice. Also no matter how much you battle with climb, you have to have some time like pocketing, optional cleaning etc. when you have stiff X rail and good alignements on your wheels, you will be good to go. Existing washers between bearings inside wheels are too thick, most of us replaced with thinner washers to eliminate movement. Good luck.