Trying to make a family sign for a secret Santa Christmas gift at work and cannot figure out how to make a French accent on the letter e, é. I use the Mac keystroke to create it here but in Easel the keystroke is not recognized. A search of the forum doesn’t seem to bring up any answers.

Can you just make 2 dots and move them above the e.

Thanks I will give it a try

I saw someone yesterday needing a similar sign but the 2 dots were over an a and figured that would be a way to make it.

I used your idea and made a separate text box with an apostrophe and moved it where it belongs.

Did you give the apostrophe a right slant? A straight apostrophe would not be the proper way. I wonder why Easel does not recognize accented characters as valid. Does it support only basic ASCII and not Latin or other types of characters? If this is the case it is quite limiting to English language. Maybe there is a setting to enable Unicode.

I use the Mac keystroke to create it here but in Easel the keystroke is not recognized.

Can you elucidate on what the “Mac keystroke” is? Is it similar to the alt code for a particular (usually special) character?

@MartinLowe I just tried the accents in Easel (on a Mac) and they work, however, I’m wondering if you are using a font where the accents have not been defined therefore not available. I tried several fonts and I was able to produce the accents. What font are you using?

Option+3, then the letter you wish to accent, in this case e

I created accents in most fonts (regular not pro version)and produced them on my Shapeoko. I noticed that some of the fonts will not give lower case. I was able to produce accents in all fonts but… I noticed that you need the bit to be small enough to produce the characters since I do not have pro, I cannot v-carve in Easel so I used 1/16 flat endmill. In Cinzel, I could not produce the letter properly because the serif is very pronounced so I increased the size from 2in to 3 in and it came out properly (last letter in each row). So we know it works, the question is why does it not work for you, maybe it is your keyboard, my keyboard is set to produce the accents. You could try generating the accents through the character and symbol viewer. 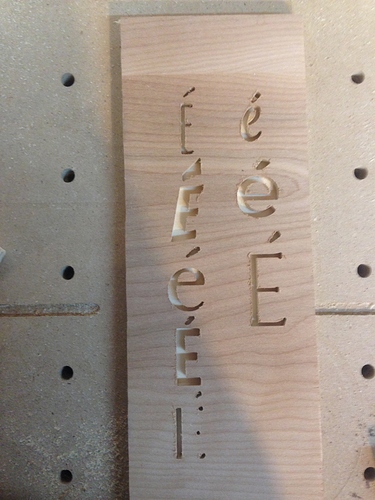 Thanks, what keystroke do you use to generate the accents on the letters?

I use a bilingual (English French keyboard definition named Canadian French ISO keyboard. The é is the / key, next to the shift key on the regular US English keyboard. You can load this and other definitions in the keyboard in system preference and you can change between the different definitions.

A nice utility program for this is:

He’s using a Mac not a PC, There is no Alt key on a Mac and no equivalent.

Obviously I’m not a MAC user…and NEVER will be…

I didn’t catch that he was using a MAC, but…the OPTION key for MAC’s is the equivalent to the ALT key for a standard keyboard.

So… OPTION+e should do the same thing…

¡£] this is what you get for Option 138, maybe you can find an equivalent but in the Mac OS, there is an easy panel called character viewer where you can access for all the characters. 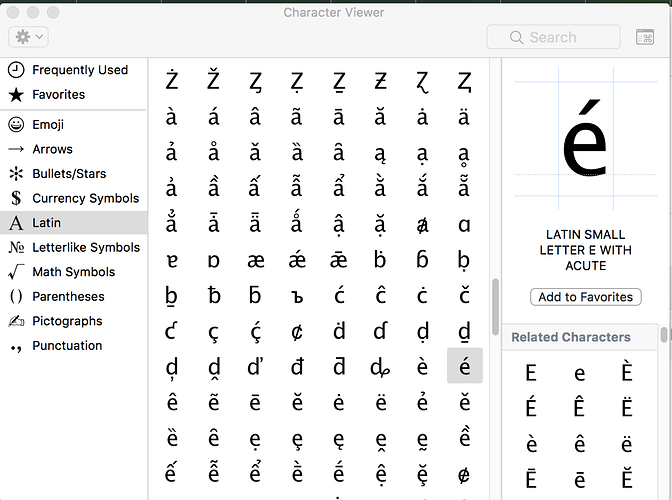 Too bad you are Mac phobic

Fortunately the ASCII table predates all of us and all modern computers have a shortcut to produce all ASCII symbols. You just have to know how to utilize it …

I’m not MAC Phobic…I just dislike a lot of things about their products and enjoy being able to do what I want to with my operating system.