New guy with no experience needing some help with project

Did a project yesterday and it came out pretty rough. Used a 60 v bit. It left a lot of tool marks, I was also getting some chatter mostly on a diagonally more x axis. The machine also carved an outline next to the letter L for no reason that I could see. 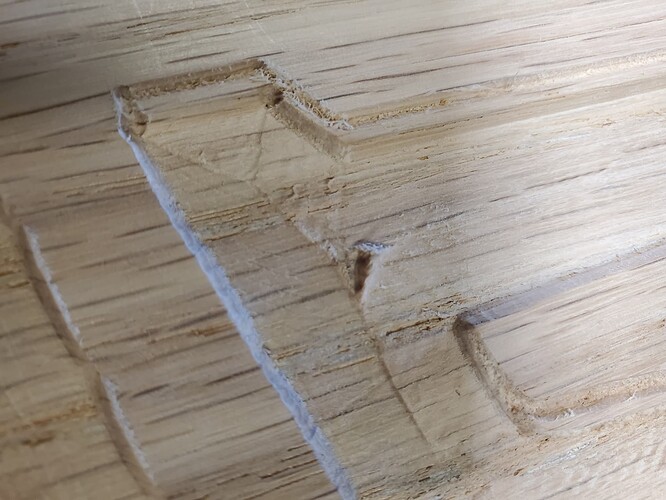 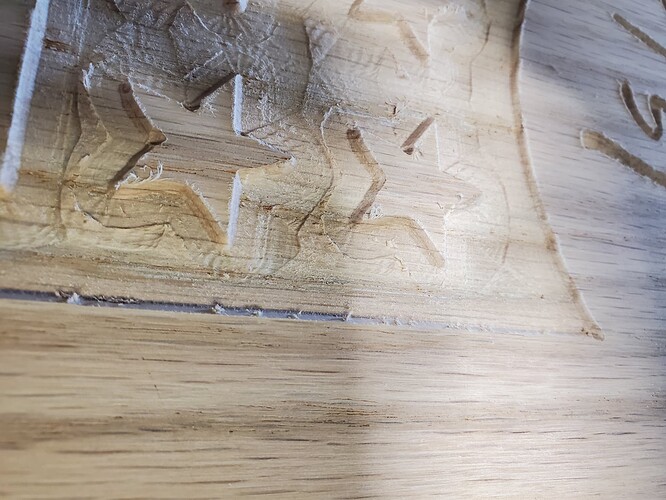 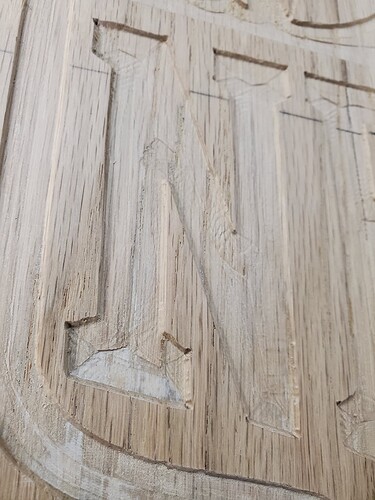 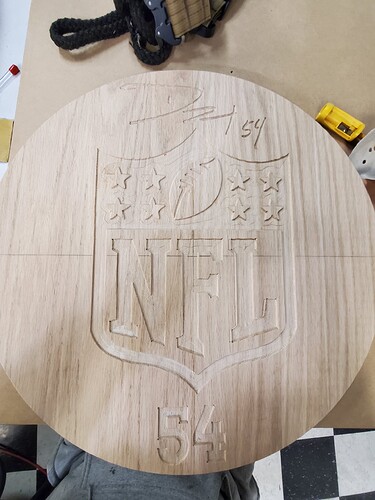 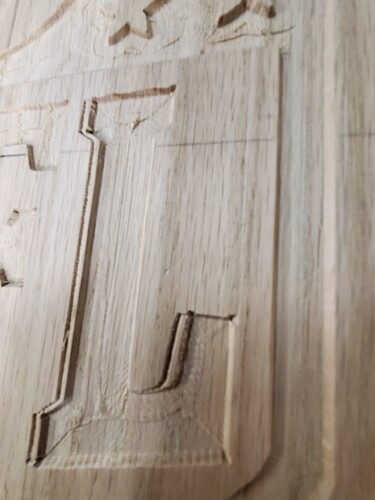 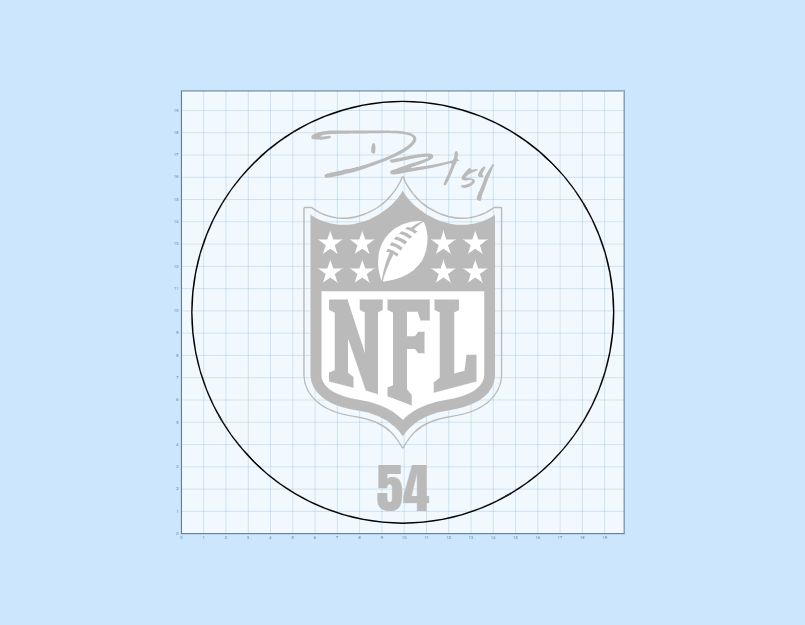 Welcome to the forum @RandyBessling!

The bit that you use must be the bit that the code was produced with from the design.

Are you using an X-Carve?

Check that the machine is assembled and things are tight as recommended.
Make sure to zero both the roughing and detailed bits correctly.

With respect to the extra line, you most likely lost steps during the carve which through the machine’s actual position vs. expected position off.

Thanks for responding. The pictures I shared here was with a 60 v bit so i created the project again with 2 stage in hopes that someone could confirm this might be a better route so I dont get all the tooling marks. I am using the newer x carve.

I would be zeroing from the center which makes me nervous when changing the bit also as being off a hair.
The extra line was weird bc when it came back to put the details in the corner of the letter it didn’t do it where the initial line was made which tells me that line should have not been made. Also the machine also was inconsistant in putting the detail cuts in the corner of the stars…it would randomly pick and not do every star corner.

The Easel design looks normal to me after changing the detail bit to a 60-deg V-Bit. Unless you are doing single-line line art, you will want to use two-stage carving for designs. The roughing pass will remove material more efficiently, and the detailed pass will simply cut the areas where the larger roughing bit could not go along with the edges to make it v-carved.

Also, if you do a two-stage carve with a V-Bit as the detailed bit, you will want to move the outline contour cut to a separate workpiece and cut that out with a straight bit if you want a straight down carve for the outside. Easel currently cannot separate the outline cut from the detail carve and always places on the detail carving toolpaths which is not typically what you want.

Are you using an X-Carve? It’s perfectly fine if you are not, but knowing which machine you are using will help in troubleshooting efforts.

This really looks like a loss of steps on mostly the X-Axis with just a smidge of the Y-Axis to me.

I dont really like the vcarve bit for the angle it leaves and rather have a straight block type design. Can i not do the 1/4 bit to rough and then a 1/16th bit to getin the tight spaces?

I am using the newer x carve yes.

what would cause the machine to lose steps?

You can most definitely use two endmills, but the result will not provide optimum results for a design such as that.

Two things to do with the X-Controller:

Do you have the X-Controller? If you do, you should open it up and check the Dip Switches for each axis. Dip Switch 4 should be set to the OFF (Down if viewed with numbers on bottom or left in the image as shown) position as shown in the image below. [Capture] You will also need to ensure that parameter $1 in the GRBL settings is set to 255. [Capture] {:0) Brandon Parker 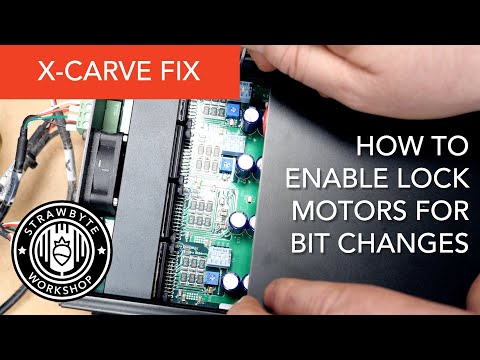 After this has been accomplished, the machine should not move during bit changes. If you still lose steps during a carve then either the feeds/speeds are too high or the potentiometers within the X-Controller need to be adjusted to provide more current (or sometimes less…if the drivers are becoming limited) to the stepper motors during carving operations.

There’s a little bit of information regarding that in the X-Controller assembly instructions…
https://x-carve-instructions.inventables.com/upgrade/step3/1assembly/

Brandon gave some great information, the logo looks like its been traced. I will attach one I have. Also you don’t have to cut so deep when doing carves. The deeper you go the more chance the tips of the stars or letters will break off. Try .1" using a 60 degree V bit and a .25" for roughing. The carve wont have much of an angle and you will save a lot of time. Just a suggestion
Remember when doing a 2 bit carve to set your Z for both bits in the same spot. Pick a piece of material that wont get carved to set you Z. You can set your home to the center but when setting your Z move your router to the side, top or bottom.
Russell 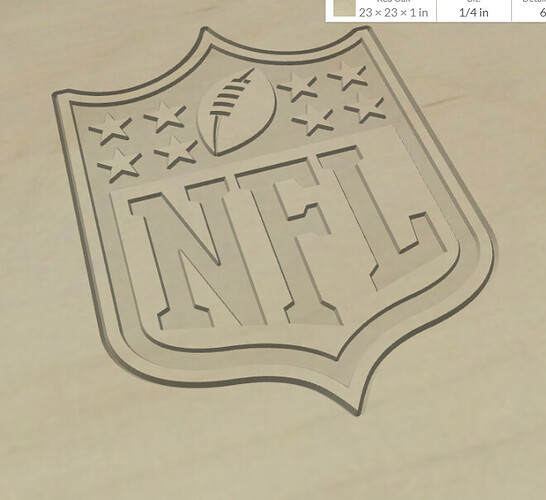 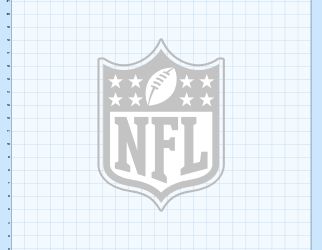 Thank you both. I did just set everything up to lock the motor so GTG there. I will take your advice on depth also. Your logo def looks better. Thanks again. Crossing my fingers.