Hi all,
I’m new, I purchased an x-carve 1000x1000 with x-controller before Christmas which went together well but it was sat in my kitchen so I couldn’t really use it. I have now completed building an enclosure for it and have spent the past week doing setup, calibration and test carves etc.
Today was my first proper carve and I’ve run into a few issues.

First up I went to flatten my workpiece, I’m using a new 1/4" shank, 1" wide bottom clearing bit (cheap chinese unbranded from ebay), using easel I’ve created a shallow cut 1mm across the whole workpiece. The workpiece is a cutoff of an old worktop in some hardwood which I can’t identify possibly iroko or moabi. The cut is 0.5mm per pass at 1000mm/min plunge of 50mm/min with a 40% overlap on an offset cut. The dewalt 611 is set at speed 1.
The carve completed fine however there are quite pronounced ridges on the overlap and it is taking less from the middle/start of the pass than the ends. It seems to slope away from the centre in all directions. See pictures 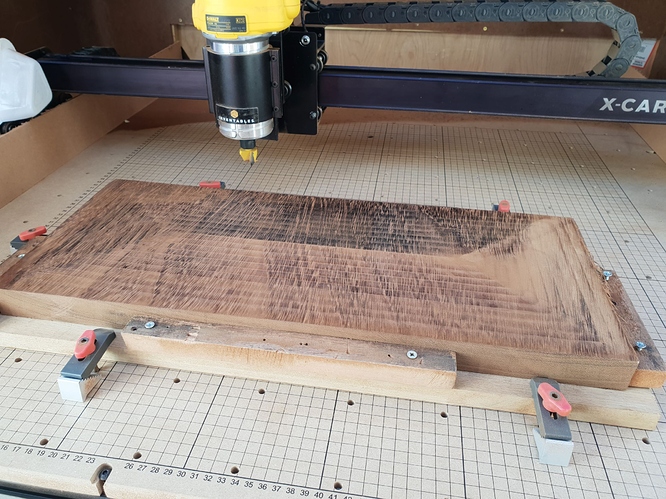 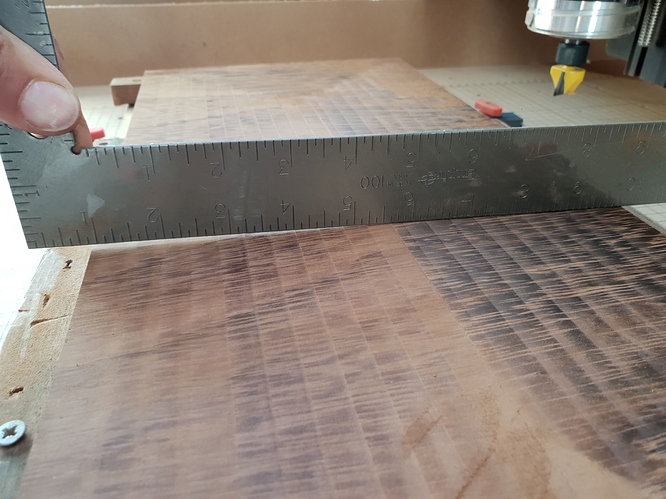 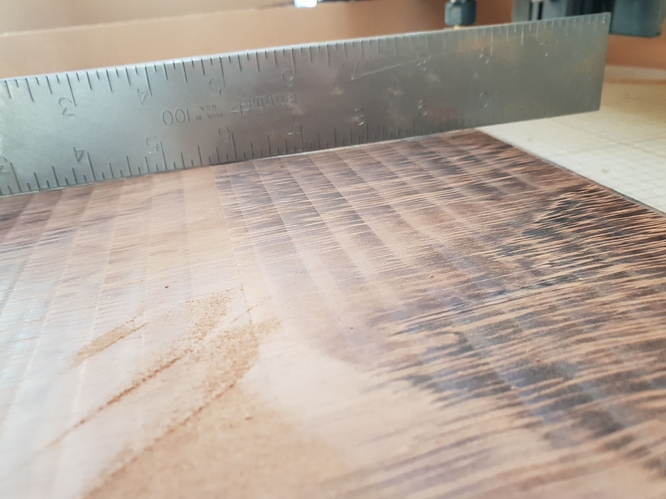 Any thoughts on what is causing this? Is it a feed rate issue or possibly a result of plunging in the centre for the offset cut? I have the remaining worktop which I’d also like to surface if I can sort this out.
The wasteboard is as level and flat as I can measure, the machine is square in the x/y and the z is square to the wasteboard. The belts are all tight, the v-wheels are adjusted as recommended.

Looks like you need to tram the z axes. Make sure it is square right to left and front to back with your waste board.

In addition to making sure you’re tram as @WayneHall mentioned, make sure any dust collection isn’t impeding the Z.

Thanks for your replies, I haven’t yet fitted the dust boot so that isn’t the problem.

I believe I have the z squared
See the images below, there is nothing loose and the only gaps on the square is front of the router carriage but that is due to the sticker and appears consistent 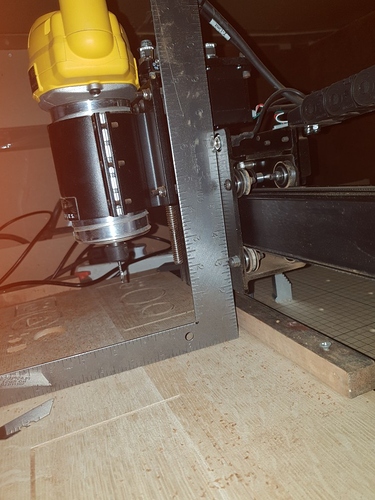 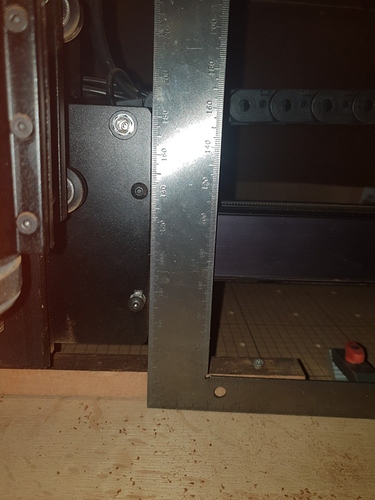 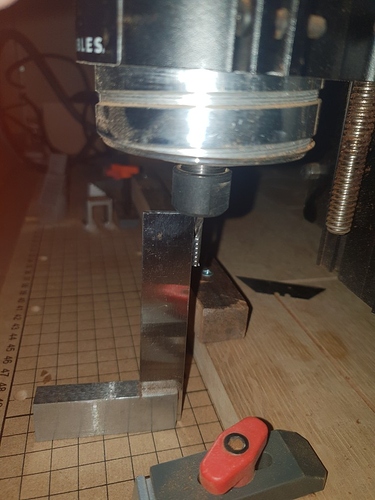 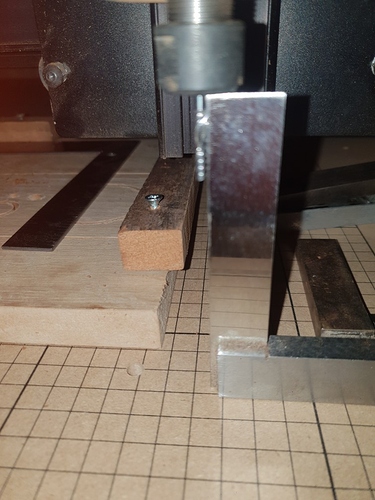 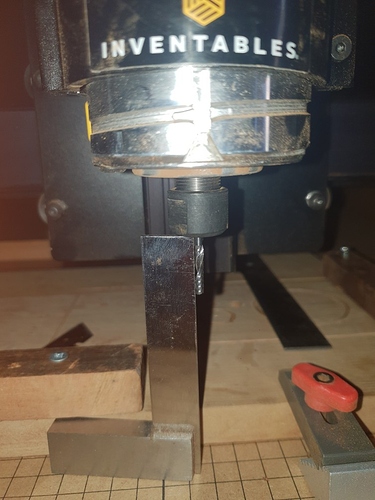 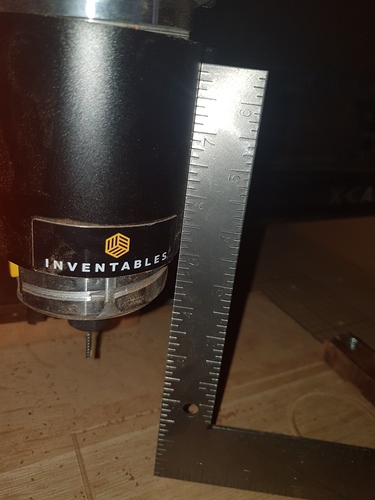 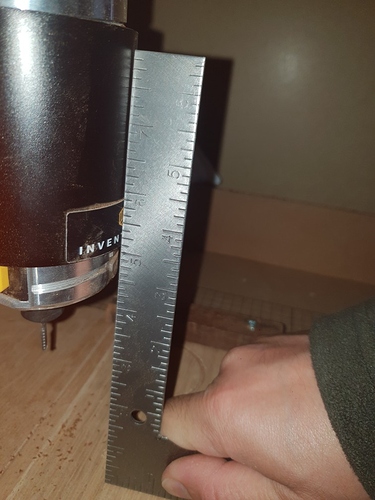 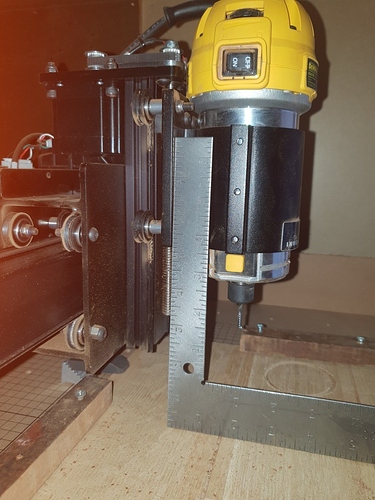 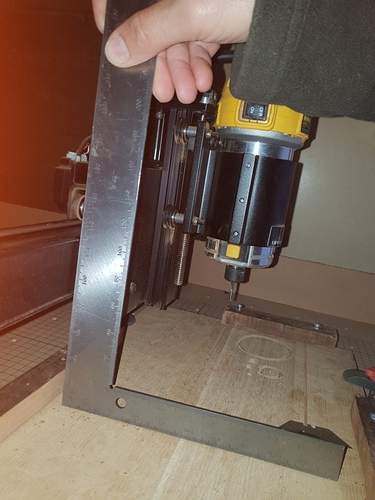 I will try and make a dial guage holder later and double check.

Try resurfacing using the Pro Setting to follow your grain, does the left and right sides have the same ramp up towards the middle of the piece that the long sides do? I wander if the can you tell if the ramp is on the near or far side of your piece. I wander if the router rotation is causing it. And lastly did you pull up hte board to see if it warped after you surfaced it? 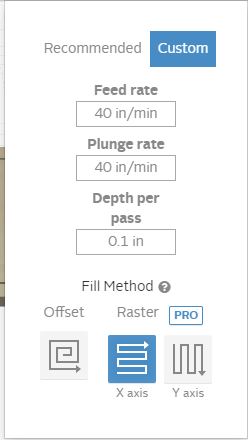 Unfortunately I don’t have easel pro.
I don’t think there was a noticeable slope from the short sides. I surfaced both sides of the board the worst issue being on the second side after having planed and scraped flat the underside so I don’t think it is due to a warp. I have since hand planed this surface too and moved on but will have another play this afternoon to see if I can recreate or spot something else.

Any thoughts on spindle speed the xcarve was on speed 1? I used the same bit in my 1/4" inch dewalt plunge router which is fixed speed at 27k rpm so 6 on the 611 rather than 1 which is 16k. On the same material I can plunge and easily clear 5mm per pass.

Unfortunately I don’t have easel pro.

Everybody gets 4 free days of Easel Pro a month. To see how, just select a fill method option like Steve indicated. A box will come up saying you need Easel Pro … scroll down and you will see the choice to use a free day.

Ok, awesome I’ll give that a go in a minute.

Try setting your step over way down to like 15% worked for me.

Ok, to follow up on this, following another day of messing with it. I took the z axis off repositioned it and added a small shim between the router carriage and the vertical makerslide. I tightened this back down and rechecked square and to the accuracy of my squares and the flatness of the spoil board, the z is square in both x and y.
I re-ran the surfacing carve using the same settings as yesterday just slightly narrower board since I’ve used 1/3 of it. I still get the same issue but not as severe today, so I assume re-adjusting the z axis has improved things. 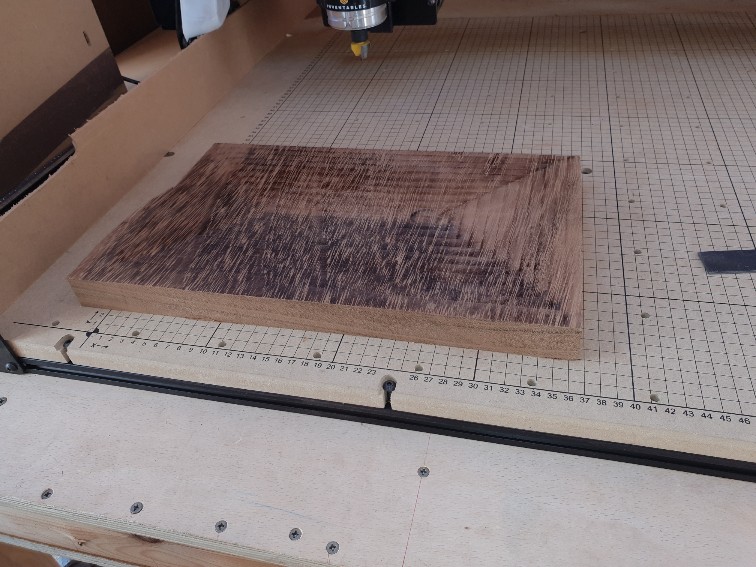 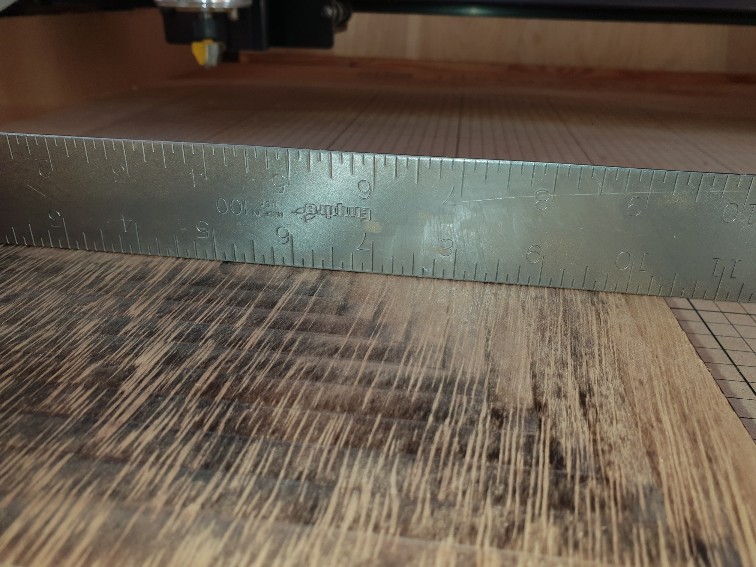 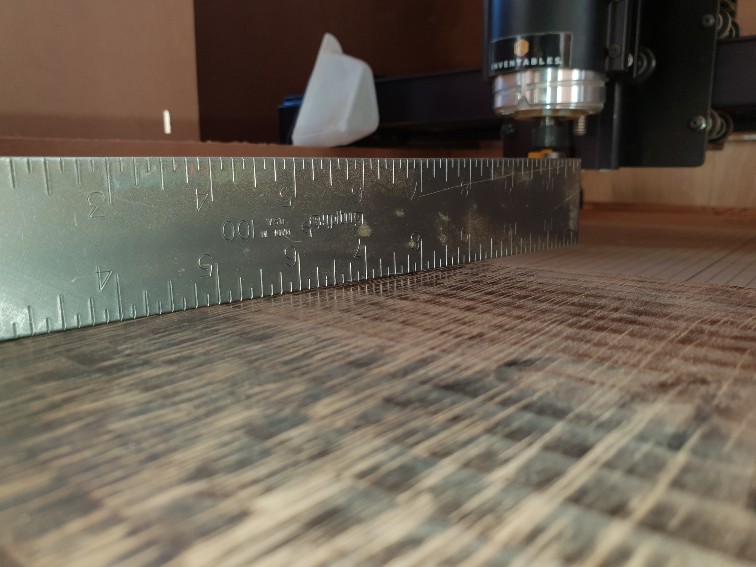 The tool marks are still evident, these are like undulations and there is still a high point in the centre of the carve in the y axis direction but not in the x-axis direction.

I then tried the y axis raster cut in Easel pro, this still produced tool marks, which can be felt but there is no high point so more successful in that regard.

I made a dial gauge holder and mapped out the wasteboard, whilst it is not fully accurate it gives an indication, the centre is low and edges are high with approximately 1.5mm difference from highest to lowest spot (this is after adjusting the 4 corners as much as possible on the rails) 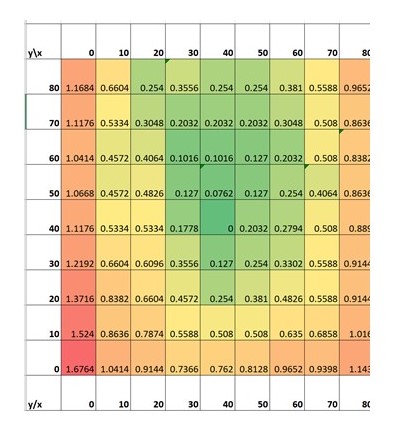 Using the dial gauge in an arm and measuring the height difference across a 60cm 180degree rotation on the x axis and y axis gives negligible results suggesting it is very close to square in both directions (0.25mm over the 30cm arm length taking into account the underlying wasteboard heights)

So I think I have the machine as true as I can, I will run a trial on an mdf board to see how it surfaces before I then flatted the wasteboard.

I will also reduce the stepover, although I’m concerned that is hiding the problem rather than fixing it.

Thanks all for your help.

Everything I’ve ever planed/leveled using my machine has always had slight tool marks. Reducing the step over or a quick run over with the orbital sander will help. The high point in the center could be from a loose router bit that is slowly being pushed upward into the router. Other than that I have no clue. I’d probably make a brand new easel file. Also, I run my router on the highest setting. Not sure what other people do but maybe bump it up to 3 and see what happens.

Also, I run my router on the highest setting.

Interesting. I’ve never moved mine off the lowest speed based on something I read here sometime but curious now on how others set speed.

Interesting indeed. I’m pretty sure the directions told me to leave on 1 or occasionally 2. This must be in the advanced class! 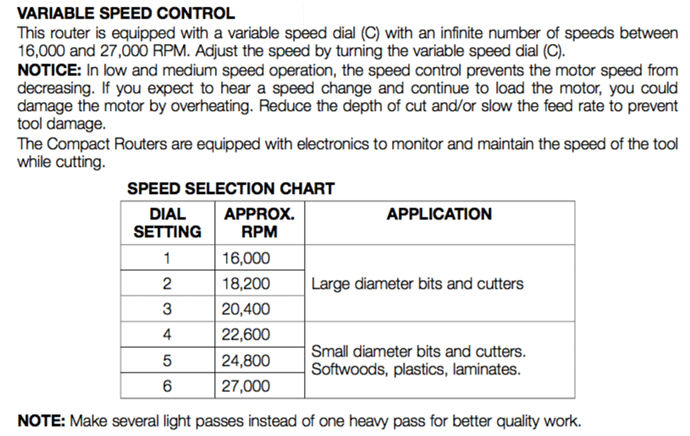 Directions for the x carve that is

@RobertLBragg
I assume that pretty much all the bits I’d be using with the x-carve (1/4" or less) would be considered small diameter bits. Is that correct?

Also. high RPM is usually not a good thing when doing plastics.

Try changing the raster to go with the grain of the wood. May help.