Hi, my name is Amber and I am new x carve owner. And I am very nervous about this.

As I set up my machine, the setting and all. Then I click carve.

Then I tried again with just my name alone.

Then click carve, it looks good then sudden it kept just carving 5e same letter over and over, it went deeper. So I stop the machine. I don’t understand why it kept carving the same letter when I set up the cutting depth to .2.

What am I doing wrong? I have attached the photo. 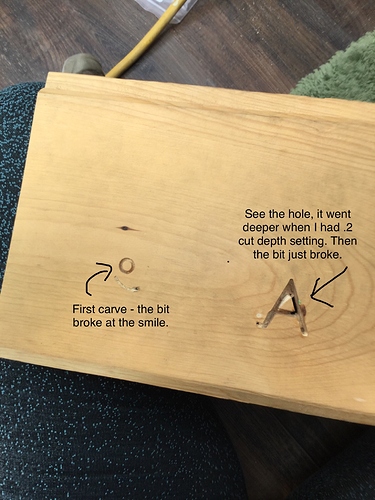 Please bear with me. I am trying to understand the terms that are used for x carve. I am not sure if it is a default setting because I was following the instruction that was provide to me to do my very first carve. I will try check the setting again.

Okay, I did not set up the default setting when I first tried it. I only followed the testing instruction.

Just few minute ago, I changed the cut depth to .1 then set the cut settings for the depth pass to .02.

Still kept cutting same letter, it doesn’t move over to new letter. It just kept carve until it goes deeper. I feel like this machine is going rouge on me. I tried many different things that was suggested on forum, and google. Nothing works for me. It is getting frustrating.

How are you setting the bit to the work surface. The reason i would say it is not going to the next letter is because it is not done with the first one. Are you using a probe or setting it manually?

Yes, I used probe setting. I even watched the video how to calibrate from step to step. The spindle kept carve the same area and went deeper - I just watch it dig deep until it hits my workboard. That’s when I hit the red botton. The cut depth I set was .2 inches, but it carve down the .625 (both soft maple abs mdf). The troubleshooting said to tight the collet, and I did that.

My question, The probe is actually always works? It could be that my z-axel zero that is wrong?

I am going to call customer service and see what they say about this.

Welcome to the forum Amber,
Did Inventables get you going? If not just continue to ask questions until you understand
Good Luck
Russell

That is a very aggressive cut on an x-carve particularly with a 1/16" end-mill. I mean if that was foam, sure you could take a bite like that, but not in wood. The primary reasons for breaking end-mills are either you got your z-height wrong (remember the machine has no idea what you put it in so doesn’t know what the “0” height is. The probe tells the machine where the surface of the work stock is, and then it cuts relative to that. So imagine you got that wrong like there was a dent 1/8" of an inch in the surface of the board, the machine would think the top is 1/8" below the surface. CNC machines work off a relative coordinate system, similar to when you tell a friend that the pizzeria is 2 houses past the “old-johnson place”. That only works if you friend knows the right house for the johnson place. If he was off by 1 house he will end up next door to the pizzeria. The probe essentially tells the machine where the johnson place is (if you look in the gcode easel produces you will see the instructions move the machine to (in your case) -0.2 for z for the first cut layer. so of the zero isn’t right -.2 is anyone’s guess if you were off by .1 then you would really be cutting -.3 into the material.

The other reason is you are being too agresive with your feeds and speeds. So the load on the tool is a combination of how deep your tool is and how fast you want it to move through the material. Remember the tool moves both as the machine moves around x-y along with the rotation of the tool (otherwise known as surface feet, as in how many feet will the tool move along the surface). So just like a snowblower (I don’t know if you live in a cold place) you can’t ask your regular home grade snowblower to drive in top gear through 3’ of snow, it will just clog solid since you are feeding more material than the blades can chop up for the power it has. But a giant airport snowblower can drive 30mph through 6’ of snow.

While carbide is extremely hard, it is brittle so easy to snap (it won’t wear down quickly but is easy to shear) so if you put too much pressure on it through asking it to move faster than it can cut that much material then it will snap. Luckily unlike big diameter metal cutting end-mills these are pretty cheap. On my Tormach I’ve got a few that would be a very expensive mistake (like some of my 1/2" stainless steel roughing end-mills - as in tools to cut stainless not made of).

So first thing I would try is to lower the load on the whole operation, as in lower the depth of cut to a much smaller number (who cares if you undershoot, even if you got to .02 to make sure everything is working). It will take a lot longer but the goal here is to get started. Then you can set the cutting speed lower like 30 in/minute (a good starting place is set the material correctly (plywood, mdd, whatever - I use soft-maple for pine) and use those values as a starting place. Now can going too slow cause problems? Yes if the machine (other than with MDF) is just producing dust then you are essentially rubbing (and while rubbing is racing, it is not machining) so then you need to up either the speed or depth util you get chips.

There are strategies for using a much greater depth of cut (DOC) during machining, but easel does not do adaptive strategy machining like Fusion 360’s CAM does. And even then nobody does typically more than 2x diameter (in other words for a 1/16" tool you wouldn’t go deeper than 1/8" (or 0.125") but Easel isn’t doing adaptive so I am much more conservative. Of course on some monster milling machines they are so powerful and rigid they can do more. I will push harder in MDF (because it’s sort of compressed dust but in real wood like oak that would snap tools).

The other reason not to aggressively push the tool is because the drive steppers can’t push hard enough and you will skip steps (in which case the machine will not know where it is because it has not idea the motors stalled out). So fancy machines with servo drives or encoders know whether the machine succeeded in every request, but the x-carve has no idea.