Can’t help with that, but melamine does make a nice table. Kind of wish I’d made it a couple inches wider on all sides so I could make more notes though. I’ll be interested to see just how you get it worked out.

Here’s how I set it up. Nothing fancy, but it works great. Solid as a rock. There’s a ton more wasteboard there than I actually need, once the first wasteboard is ground up, I think I’ll just remove it entirely instead of replacing it, and use the second layer. I just HAD two pieces, so I used 'em both. Limits my Z a bit, given that after fixturing and with a quarter-inch bit, I don’t have more than an inch and a bit left. Would be better with only one piece. I have but have not yet installed a set of angle brackets for the Y rails as well for stabilizing. That’s on the to-do list shortly. Planning to just use T-nuts to attach them to the rails, then screw them down to the table top. 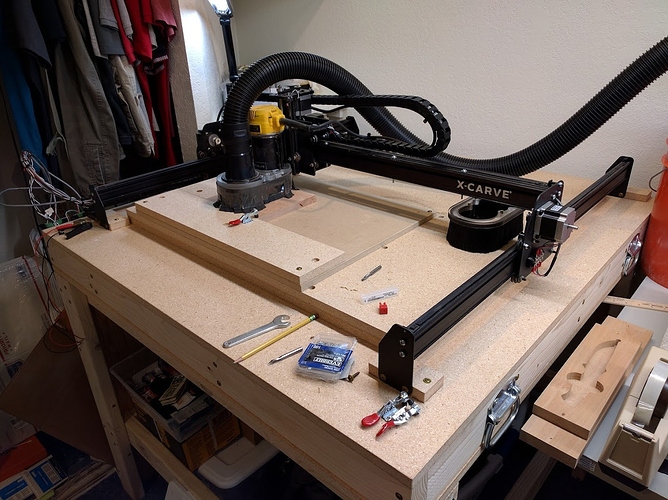 I left my perimeter frame assembled and made some wooden mounting blocks with a tongue that inserts into the slot on the side of the 20x20(?) maker slide of the frame.

The bottom of the block comes just shy of sitting level on the tabletop, if held parallel to the table there is about .5 to 1.0 mm clearance under the block so that when a screw is driven through it tends to pull the frame down tight to the surface securing it vertically. these can be place inside or outside the perimeter frame as needed. Mine are on the outside. I used two on each side at the corners to secure things in 3 directions. I may install 4 more in the center of the span just for some added security.

I’ll see if I can get some pics up to show just what i am saying (that pic=1000 words thing ) later this evening.