Note field over project categorie with information about RPM and diameter

is it possible to add a field, for example over a project in the categorie, before I open it, to see /descibe what RPM of the router and cutter/bit diameter I have used the last “succesful” time?

So I can save time to write it down for every project that i´d made, and don´t forget for example to put down or up the RPM of the router. And can work more organized with the bits. 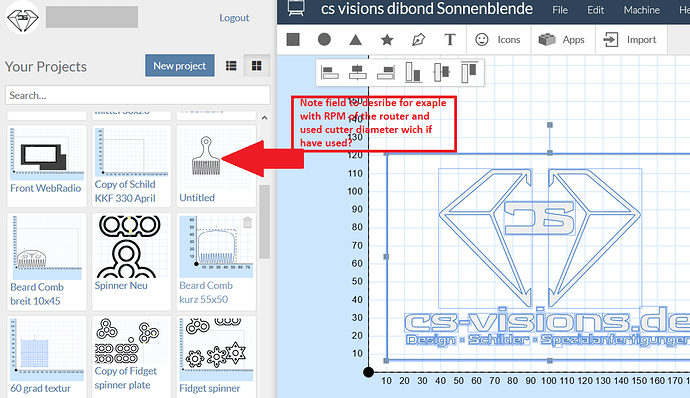 @PhilJohnson Where i Can See it?

Yes 1 point is that i Can See it First.

The other one is, I want to write down and See, which speed RPM I had on my Router for example an stage 2 with 25.000 RPM. and Yes I See that i used a for example a 1mm bit, but was it a normal 2 cutting or a down cut or a diamond tip down cut bit and so on

And I have no controlled spindle I have the dewalt, everytime one 1?

So okay, the easyest way to give me month later a reminder which bit I have used is to write it with the Text tool on the carving area in easel and paste them again after I fineshed my Job…

Okay, believe I have thought too complicated

So I save the “used bit and RPM” in the project title thats it, thanks