Looks like you lost steps or lost your zero when you changed tools. How did you re-zero when you switched to the detail bit?

I just did the same thing for each bit. Brought the tip to the very front left corner and to where the bit on Z just touched the material. Confusing…

Did you use “Use Last Zero Position” in Easel? Or did you re-zero?
Doing that by eye isn’t really an accurate method.

Well I’ve done both to be honest. That only happened the last time I carved for whatever reason. Probably something I’m doing wrong. But I cannot figure out why the bottom won’t carve as shown in easel. I’ve carved 3 times now. Changed different size bits and still doesn’t replicate the detailed preview.

What did it look like when you left your zero position the same?
There’s most likely nothing wrong with your Easel project. The preview is pretty accurate. It’s either a mechanical issue or something with the setup. What if you do the whole thing with your detail bit? I know it will take longer, but you’ll eliminate a variable.

That is true I’m going to flip both over and make a couple different practice runs. But here is the simulation and it is smooth and clear. Definitely not what it carved out. Especially around the bottom of the R 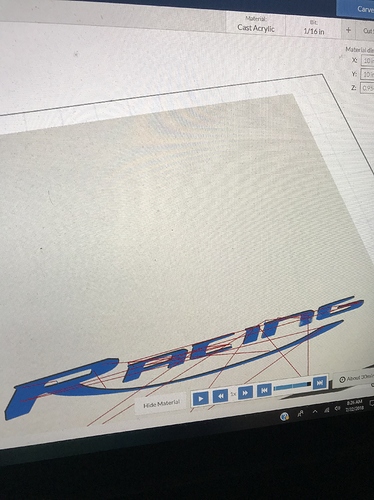 It should look just like that when everything else is working.