Odd issue I’m having here. I cut out two parts from 1/2" HDPE perfectly fine, but when I went to cut out the next part from 1" HDPE I got these strange “stepped” cuts like in the image. It’s only happened on edges parallel to the x-axis, but happens consistently with this part as I’ve tried carving it twice with the same issue. 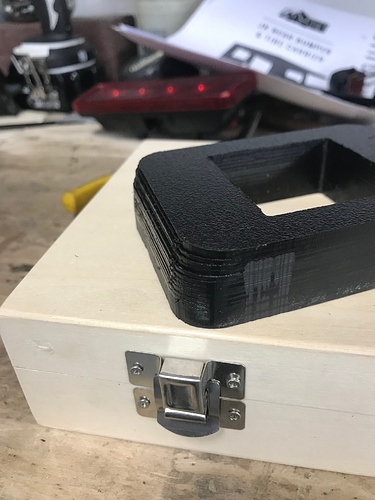 Lost steps would be my guess. The marking on the front looks like something out of true (search trammel).
Check your wheels, belts, etc.

I thought this at first too, but wouldn’t that result in a smaller part? The top face is the proper dimension while the bottom is actually larger. Is gaining steps a thing?

That is really weird.
Yeah if it was a mechanical problem you would think it would be getting smaller not bigger… or just shift on one axis.

What program are you using? Easel? VCarve?

If you were using vcarve… I would say double check what bit you have selected… it is almost like it thinks you are using a tapered bit / v-carve setup somehow?

Looking at the part, if you lost steps going towards the right, and then came back the correct number of steps to the left, the bit would be further to the left than before.