I am working on a serving tray and am using the X-Carve to cut the grooves and curved profiles shown below: 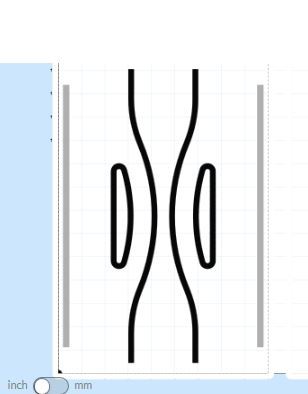 I cut the handles to length on a table saw using a custom sled that I built. Using Inkscape, I have been trying without success to find a way to offset the curved open paths in the middle similar to the function within Easel used on closed paths.

My workaround has been to use CAD and physically model the cut that the bit will make. This works fine, but no matter how I change the bit diameter (even tried a diameter of .2499 for a groove width of .250), it thinks it needs to do two passes on each depth rather than decreasing in Z each time it makes a pass.

Is there a better way I could approach this?

This is basically a limitation of Easel. It won’t make a cut the same size as the bit width. So you have to make the slot slightly bigger than the bit width, and so it is necessary to make two passes. In you example, the first pass removes 0.2499 of material, and the second pass removes 0.0001 to make the total width 0.25. In our mind it doesn’t need to do that second pass, but the first C in CNC is a real stickler for making sure it comes out exact.

No, that all makes sense. My 1/4" bit measures .246". What I’m looking to do is trick it into the producing the result that I want. Since it won’t cut a .250" path when I specify a bit that is .250", I thought going slightly under might do the trick but it didn’t work the way I was thinking.

What I first tried was bringing in the entire outline into Inkscape and cutting off the three straight edges but couldn’t find a way to have it carve on the “outside” of the path rather than the center. I suppose if I offset the location of the path by .125" (or I guess in my case it would be .246/2 = .123") it should do about the same thing, I was just hoping for a more exact solution and wanted to learn how to work with open paths better.

Thanks for the feedback.

Thanks, I’m well aware. I normally do so, but as mentioned, was trying to see if I could keep it to the single path and not have it double back unnecessarily.

I appreciate the input. From a work flow perspective it is drastically more efficient for my situation/quantities to use a table saw to cut the straight edges rather than let the machine do those. In this case, I only need the machine to cut the curve and the cutout.

Yeah, that’s what I was thinking of for another work around. Thanks, @PhilJohnson

Yes, I’m feeling this will be the easiest way to go about it. Thanks for the feedback.