OK Folks, any help would be appreciated!

Did you check set screws on pulleys.

When you set up the 0,0,0 point to start from, are you using the computer to do it or are you doing it by hand?

If you’re doing it with the computer, does it travel ok when it’s homing or does it skip or stutter?

If you’re doing it by hand is the machine off when you’re moving the axes around?

Try using Easel to carve just a simple square or circle or something, maybe 2" around. Doesn’t have to be filled in or even go all the way through the wood. Just something to check and make sure the machine is acting properly to the gcode it receives.

If you can’t get a simple shape out of Easel, it’s time to tune up the machine. Make sure the belts are tight, the set screws in the pulleys are tight, the eccentric nuts on the v-wheels are tight and that the pots on the grbl shield are set properly.

Once you get to where Easel is doing what it should, then take a look at whatever you’re using for V Carving. Look online for a Gcode visualizer for your computer. There are several free programs. What they do is simulate the Gcode running in the computer instead of on the machine so that you can tell if there are any errors in the code before you run it.

Yes I am. I have just deleted it and will reload it later to see if that clears up my problem. It is not a mechanical problem as I ran a test cut with easel and all went well.

Have you watched the video tutorials they have online. They are very good and have picture files that you can download to follow along with. You also need to be sure you have the correct post processor for V-Carve loaded to create the proper Gcode files.

Yes multiple times. I have just finished re-downloading the software. Set it up per their instructions and tried carving. Same thing, just dug a hole in one spot! About ready to try another software.

On the last step, where there’s a drop down to select the post-processor, make sure you pick “G Code Inch” 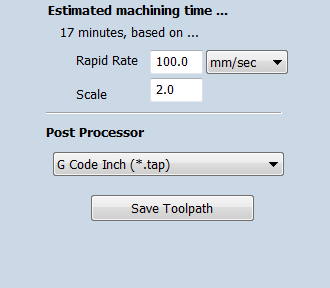 When I tested Photo V-Carve it generated HUGE g-code files. That might make an Arduino based system choke. You can test this by opening the g-code file in a text editor and deleting everything after the first page or two, saving it and running it again to see if the beginning of the file then behaves properly. If so, you can break up the file into different operations.

Not sure what you did, but I downloaded the Vcarve photo software from Vectric and used the sample picture they provide (puppies). I carved it using a 90 deg vbit and while it did carve it correctly the picture was not really visible. I did the same picture again with a 60 deg vbit and it looked a little better but it was still not a good picture. The last one I did was with a 30 deg vbit and it was even better.

What I learned - FIrst issue was that when I generated the Gcode using the “G-Code inch” post processor I had to manually insert the G20 command to force the Grbl into inch mode.

Secondly - Carving a picture with this “raster scan” method does not produce a very good result. The main issue is that the depth of the cut is very shallow and most wood do not hold detail well using this method. You would definitely need some method of enhancing the contrast between the cut and uncut wood. For testing I spray painted the 60 deg test cut, let it dry and then sanded the paint off the surface. This helped, but the cut was so shallow that the sanding removed some of the material from the “cut” areas.

I think that some very high contrast photos with low resolution may be able to produce better cuts, but overall it does not look like a usable method for carving photos. The key seems to be getting a deeper cut in the material.

I think the real value of a program like Vcarve Photo is to make lithophane’s in a material like white corian.

I will experiment with that and see how it goes.

What I would really like to try next would be to convert a jpg picture to a depth mapped STL 3D image and then use VCarve Desktop to carve the 3D image. From the sample I have cut with Vcarve so far it seems to do a very good job , it really is amazing.

So James, I am not sure if any of this helps you, but it was interesting to play with the VcarvePhoto software to see what it would do. What was obvious was that the software does work, it may not carve a great picture, but the software does do a very good job of carving a raster scan image. And it does it very quickly. In my examples a 150 line raster image with a size of 3x5 inches was completed in about 5 to 7 minutes.

Alan - if you can figure out a good way to do what you describe, let me know. It would be nice to use graphics as a basis for 3D models to carve in v-carve. (turning a jpg into a 3d model via some extrapolation magic).

It looks like using a single jpg file to create a 3D STL file is not really workable. But using 123D Catch to take multiple (20 or more) pictures of an object or person that is sitting still will produce a very good STL file. I have played around with 123D Catch on an iPhone (free download) and creating the STL file is fast and easy.

The next step which I will try this weekend is to load the STL in Vcarve and see how well I can carve the object.

Here is a link to the captured image
http://www.123dapp.com/catch/Sonata-key-fob-/3059771
(After the link opens use the 3D view under the image)

Sweet. I gotta try that! But first I have to catch a fresh walleye.

That dropdown for choosing the Grbl postprocessor is in the PhotoVcarve software.

Ok thanks will see if I see it!

Ok, Allen Massey, I found it and made sure it was set correctly, it was, and I am now carving. Want a laugh, check out my video I will post later today.