I am wanting to install an On/Off/On Rocker Switch, by my understanding this is also known as a Center Off Switch. This Switch will control a shop vac. The Switch will be set up as Manual On/Off/PC Control. I am hoping someone can answer a few questions for me for this installation. I know that the center lug will go to the Input 3+ on a SSR-25DA Solid State Relay. The PC Control will come from the Gecko G540 PIN 5. The Manual On will come from one of the power supplies. Should this connection be made using a 12v or 5v Power supply? I assume that the 48v PSU would not be used bc the SSR is only rated from 3-32VDC. My enclosure will have both 5v and 12v PSUs.

I would also like to use an illuminated switch, I assume this might also dictate what switch that should be chosen.

My preference though is to use the DC wires for the switch connection and not the AC wires. I am trying to isolate the high voltage and the low voltage wiring to different areas. Trying to keep all switches on the front of my control box as DC with all 110V running out the back. This is why i am trying to install on the low voltage side

Well, I would like to keep the 110v separated from the other half Of my controller. With the lower Voltage on the front panel and the relays and 110v are in another. This way one area of my enclosure is low voltage while keeping the 110v separated into a different area.

Currently on my arduino set up I have a center off toggle switch. The output goes to 3+ on the SSR. One pole goes to the arduino and the last pole goes to the V+ on the power supply Interface that powers the GShield.

This configuration has worked great on my old controller and I want to mimic it. The power supplies are different now though and I would like to add illuminated switches instead of the plain black plastic ones.

I’m sorry Phil, but you lost me. Can you explain a iot relay? I am using the Solid State Relay and do not know anything about the iot relay. I have never used them.

Just to also clarify the pole on my Center Off Rocker Switch that goes to the current arduino setup is controlled by the M8 command. This makes the relay turn on automatically with Gcode commands.

Ok, now I know what you are referring to.

I already have the SSR relays and they have worked great so far. My new controller is self contained and everything plugs into the back of it like my first controller with the arduino.
I would really like to just mimic the current system setup except replace the arduino with a Ethernet smooth stepper, the Gshield with the G540 and the 24v PSU with a 48v PSU. The different power supplies is what is throwing me. (Not to mention wanting to use an illuminated rocker switch.)

If you are familiar with the SuperPid wiring it has a Router On-Off Switch that has three positions. PC RUN/Router OFF/Router RUN Manual. In my Case the SuperPid is activated by Pin6 on the G540.

The Vac will be activated by Pin5 on the G540. I want to add a Center Off Rocker switch that works exactly the same way as the Router on/off switch hooked up to the SuperPid.

The switch will control the signal received by the SSR

In doing this I want all of the rockers on the low voltage side and not on 110v. 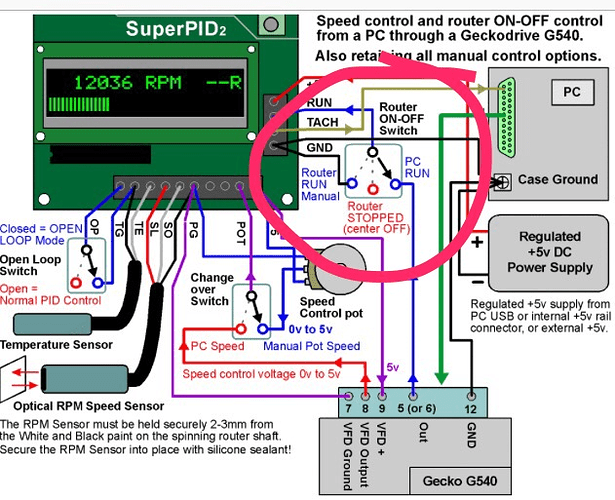 Yes, that is what I am attempting to do.

So I need to pull power from my +5v PSU for the 3rd position on the Rocker switch for Manual RUN. I assume the outputs from the G540 are +5v as well?

Can this be performed using an illuminated switch? Most switches that I have seen refer to 110v, I don’t know if the LEDs are compatible with +5v.

On the SSR, I also assume that Pin4 goes to the Low Voltage Ground, can this ground connect to the V- on the +5v PSU or should it be grounded elsewhere?

The same thing could be done with a SPDT switch.

+5 volts to one terminal

Pin 5 to the other terminal

Maybe I should have said wiper instead of common.

Your original idea would have worked. Dopes don’t make things that work.

Thanks for the information Guys.

So the complicated part is if I want to add an illuminated switch.

If I choose to not use an illuminated switch and use an LED instead, I assume that I can add an LED (that is 5v compatible) connected to the output pole of the Rocker switch. This way the LED will illuminate when the Rocker switch is In the Manual ON position and it will also light up in the PC RUN position IF the PC has signaled to turn it on, but if the PC has not initiated the M8 command or if the Rocker Switch is in the Center OFF position, then the LED will not illuminate.

The LED should work exactly like the signal-in (3+) LED on the SSR. When the SSR is active the LED illuminates.

If I’m correct in the photo you show a DPDT Rocker switch. On the side with the LEDs is there a reason why you have the Center Pole as Ground, instead of running power to the Center pole and then send the ground out from the other side of the LEDs? Basically just reverse your wiring schematic that feeds the LEDs.

The positive is always common

No. Common Anode and Common Cathode are both routinely used.

You can use one resistor with either configuration because only one will be on at a time.

Thanks for the info and assistance Gentleman.

Thanks. I already have some of those switches. I’ll crack one open and see what I can do. I hadn’t even thought about swapping the LED out. Way to think outside the box.