Optimizing cut, too many traverse movements?

I am performing a pocket carve as shown in this file:

I notice the spindle retract many times, moving to the opposite corner = a lot of time wasted moving in air.
I would assume that the fastest way is to just go around continuously and adjust the carve width of the pocket?
How can I optimise my Easel Pocket to avoid this? Or is there a smarter way to accomplish this?

The carve is removing material from the backside of a LCD mounting frame, hence the asymmetric pocket width. 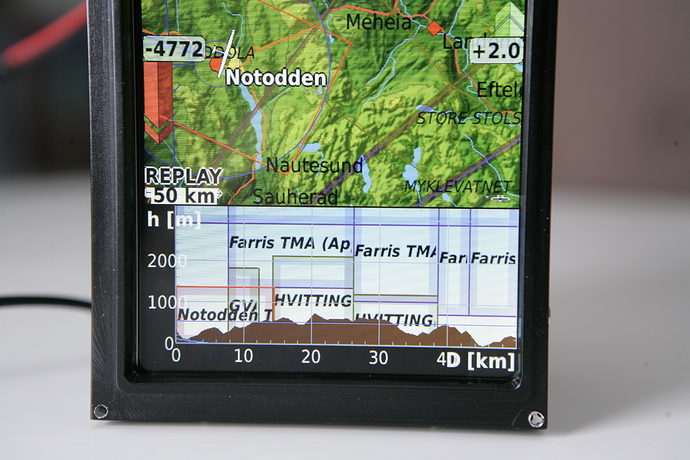 Correct, back recess for the screen. Bit is a 3mm 3F 45deg Helix upcut bit, running 1200mm/min and DOC 0.1mm
I am not using an X-Carve, my CNC is built cheap and simple and not rigid enough for bigger bit when milling aluminium.
Though I haven’t tried a bigger bit I fear my rig is too soft to accommodate. For now I can trade off with time milling. as long as I have a consistent cut and minimise stops etc I am happy for now.

I was starting to think I was getting about this the wrong way, one OD-object set to fill, and ID-object set to zero. If I didn’t have a ID-object the carve would go from center and all the way out, I was kinda expecting a similar pattern. Transverse zero-carve movement ended roughly at 25% of the total expected milling time.

I played a little with the objects, set overlap to 50% and its currently running well, still a few diagonal zero-carves… However if I have missed anything in Easel on how to optimizeit all I am all ears

I noticed the route followed the following sequence, it started in the middle of the pocket and worked itself outwards, finished with the mot outside carve, then lifted and moved diagonally the opposite corner and then cut the inside of the pocket perimeter. The lifted and moved back again to start in the middle. So inside,outside and inside appear to be the sequence.

Am I going about this wrong or am I expecting too much from Easel?

4mm pocket with a 3mm bit, I assume Easel cut each face while climb milling, retract, traverse over to opposite corner before doing the inside face, running in the opposite direction. For each layer the spindle is retracted and moved over before re-engaging the material = a lot of air time.

Reason for the desire to cut wider-than-bit slot is the increased chance for completion without error.

Yeah, that is what I figured but have yet to figured out the most efficient method to achieve what I want

Say I have a single square, set to “Fill” => Carve start in center of pocket and gradually move outwards. If I introduce a smaller square within the first on, set to “Fill” and zero depth, Easel cut using two parts, one for outside and one for inside.

Off course, by making my machine much more rigid (home made) I might render the need to do two paths useless and a single path could be chosen. I could also explore other CAM-options like F360 and adapter a HSM-stragegy etc but have not had the time to learn that yet…