Ovals instead of circles [SOLVED]

I just finished building the X-Carve and the system is “glitchy” when using Easel. I have not used another program (newbie). Sometimes it starts on the opposite side sometimes in the middle and then sometimes where it is supposed to start carving. The one thing it does every time is makes round letters and circles into an oval shape. I have tried adjusting the belts and the pots, now I am at a loss. Any help would be appreciated. The system seems to home just fine - I wonder if Easel is sending bogus g-code?

Turning circles into ovals is an indication of lost steps. Could be tight v-wheels, tight/loose belts, slipping pulleys, or a few other things. The easiest thing to check is to verify that one of the tiny pulley screws is centered in the flat on the shaft and that it’s tightened down. After that, check out this thread: [Guide] Offset cutting, Lost steps, Positioning errors, etc

Thanks! I will check out the link and start the process of elimination. I just tried carving a star and it was squashed, this it what it is doing to everything now. Ideas outside of checking mechanical?

Guaranteed it is mechanical.

Cleaned all wheels; adjusted spacers and offset nuts; confirmed tightness on tracks; adjusted belts - not too tight or loose. Ran a test again and the exact same problem - the squashed shape is identical. Wonder if a motor is sticking internally and running intermittent Y axis?

I have linked the file below - if someone can tell me if something looks out of whack, it would be greatly appreciated.

Did you check the pulleys and see if the set screws are tight and not slipping? Also might need to bump up the current to the motors. The current is the likely source of the issue.

Just checked the pulleys and made sure they were snug. I also bumped the current to X and Y no change. Will reboot and try again. Thanks!

Keep in mind that adjusting the pots requires you to find the “mid-point” between too high and too low. Either end of the scale will cause problems. Adjust each pot higher until the motor stalls or becomes noisy, then adjust the pot down until it it does the same. Midway between these two points will be about right (although perhaps slightly high may be better).

Double-check the small grub screws holding the pulleys onto the stepper motor shafts. I had considerable troubles with these when I first started - I eventually had to replace the grub screws with longer machine screws which allowed me to tighten them a little more. Next time I have an issue with them, I’ll be filing flats onto the motor shaft to assist in locking them a little better.

Adjust all your V Wheels so that you can only just turn them by hand (with a fair bit of effort), they need to be tight enough that you can reduce backlash as much as possible, without making the carriage so tight it struggles to move when under load.

If you’re still having issues, I’d get one of the more intelligent folks to have a look at your GRBL settings (@LarryM has helped me several times and he freely shares his experience).

This really does sound like a mechanical issue, but it never hurts to be thorough. Use the Machine Inspector in Easel to get the grbl parameters and post them here.

Thanks Guys! I will be going over the x carve again. I have copied the grbl parameters from the machine inspector: 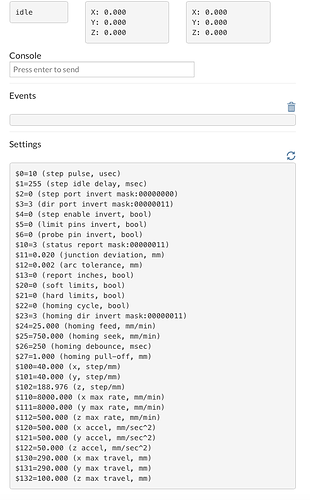 Phil, do you mean red/white and red/blue on the left power bus? If so, yes! The machine works great in every way except it compresses the shapes. I loosened the offset wheels to make sure that nothing was too tight - machine moved through axis fine but cut the exact same way it has been - strange. I will be contacting Inventables on Monday - the machine is new and it might be the gshield per Larry. Thanks for your assistance - I will post the solution once discovered.

Update: When I tell the machine to move 100mm across the x-axis it moves 190mm. I have verified mm vs. cm settings. $100=40/mm in code. Any ideas? It thinks the work space is larger - I have set the machine up correctly in Easel =500mm machine with ACME.

Check the potentiometers on the motors…This was my issue…after everything built, thought it was fine until a carve with a lot of movement. It was the motors! Someone else previously posted how to adjust this. (If you haven’t already, you probably should). Good luck!

Had a great discussion with Chris from Inventibles - they sent out a new gShield and Arduino board - changed out the G-shield works like a charm. I noticed that the jumpers were on the X axis on the original board I received and they were on the Z axis on the new board - something to check when you get your board. Thanks everyone for your input - I am now carving without issue. Also - Inventibles customer service was great throughout the entire process !!! Not sure how to mark as SOLVED.

That’s not good, and not bad. Your original gShield may not be bad. There should not have been any jumpers on the X or Y axes.

That certainly could have caused your problem in the first place.

To change the title click on the pencil at the end of the title line.