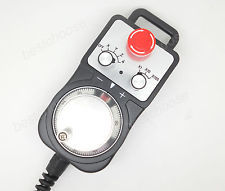 Has anyone thought of adding one of these. And if so how and which one. A friend of mine who built his machine has one but he is using Mach 3.

I believe that Chilipeppr has some support for the ShuttleXpress pendant, which is the one I’m familiar with for hobbiest CNC use. Looking through Easel, I don’t see any mention of pendant support yet.

I plan on using ChiliPeppr to run my machine. I love their setup, and as a SW engineer I’m quite comfortable with JS and love the idea of being able to develop my own modules.

I’m curious what would be needed to get a pendant like this up and running (in ChiliPeppr) with support for all its features:

It would also not be that difficult to design and build a custom pendant using a small form factor Arduino. I may pick up one of these pendants just to see what all it handles onboard, and what it expects on the software side.

Why not just use mach 3 the xcarve should support it

The pendant idea is so that you don’t need the computer. I see this connecting directly to the Arduino in some way.

Oh I thought it was just for manually controlling the machine and you still needed the computer to hook it up. 3D printers use ardino and have an sd card reader for loading gcode I’m sure there’s already half a way to do it out there

@JoeBerman Because I like open source and hackable solutions. I’d like to use ChiliPeppr so I can make my own modules/interfaces. Chances are I’ll just make my own arduino based pendant.

I did a fun video showing the ShuttleXpress pendant working in ChiliPeppr. If anyone wants to do an alternate pendant, I think using a similar approach to this technique makes the most sense.

Im no techy but there has to be a way to use an old school usb based video game controller as a pendant ? I mean it does the same thing hell being the non techy i am i thought i could plug it in and it would work seeing as it replicates the same buttons …

I used a generic USB gampad and mapped the button presses to match the software keypresses. There are lots of free programs that allow you to map the buttons to keyboard keypresses. Worked fine on my old CNC machine. I will be doing the same thing when my X-Carve arrives.

JoyToKey http://joytokey.net/en/ is a popular utility for doing that