I really wish you had a screen capture of how you modeled those wires. I’m a Fusion 360 guy, not Solidworks, but I can’t even picture how you did that.

I would reheat (left to right) pins 1,2 and 8. Try to have the soldering iron tip touching both the solder pad and the pin. Wouldn’t hurt to add just a little bit more solder on those pins.

Just curious what you see wrong.

Not wrong, but the way the solder doesn’t form a pear shape or a cup surrounding the pin indicates that there wasn’t enough of something in that joint (either flux, solder, or heat).

Is there a thread about the eccentric nut mod you spoke about?

Ooh this inspires me… next time I do the wiring on my X-Carve I might just use a full-on punch down block instead of a terminal block.

So, after having my Z axis fall apart on me mid-job - crashing the spindle and ruining the work piece - I decided to come up with a way to keep those eccentric nuts tight while still adjustable. I didn't want to use thread lock so I opted for Nylock nuts. It was also a pain in the butt to get an allen wrench inside the X carriage to make adjustments to those eccentric nuts. I wanted to change that too. So, after having a think about it, I've come up with this solution: [image] To star…

My plates don’t have them either, I feel like I’m missing out on something.

They use one plate design for both the left and right side. On the left side you put the drag chain angle bracket there. See the one right next to it.

The holes for the drag chain are the two vertically aligned ones below those Angus highlighted.

In operation I don’t think it matters much. The ability to keep the x gantry perpendicular with the y axis is important but the y plates will be outside of the homing position. That extra .1875" will be dead space. You won’t go stop to stop when operating.

Don’t know what to tell you. Mine is off further than yours in the front and so far every cut is in great alignment. The closest I can get to the Y Plate is about an inch away because of my homing position stops. I think there is a natural tendency for the X gantry to keep perpendicular if the V wheels are aligned properly. And as long as one side doesn’t slip in relationship to the other the cuts should be straight. Just my thought.

I guess what I was trying to say was it is not as important as you would think. Lets pretend one Y axis was skewed by a whole foot. As long as the Y rails are parallel with each other and the X Axis is riding properly it won’t affect the cut. Yes it would shrink the useable cut area and somewhere the wasteboard frame is out of square, but your cuts are still going to be straight and square. The X gantry has a tendency to move toward squareness. Now that said… I don’t know why it is off and there is no easy way to adjust it without shims.

When I initially built my X-Carve, I had a similar problem. This was partially fixed by changing the X axis makerslide whcih wasn’t cut at exactly 90 degrees. The main culprit though was the spoil board as I’d tightened it before making sure that the base was square (corner to corner measurement). Loosened off the spoil board and re adjusted - problem solved.
Having one of the 20mm extrusion slightly under length shouldn’t be an issue as long as your X-Carve is securely fastened to your table.

My X axis is already stiffened with steel and one side of the Y can be moved slightly before the other engages. The stiffening did not seem to correct that. But if you notice, when you push on the X axis in the middle, the Y side you have offset will come back into alignment. That’s why I said the X Axis bar has a tendency to self correct and run true.

Sounds about right. I had to shim the X to get it completely straight. I used an 18" square to verify squareness.

I think understand. So you are saying that there is not 39.37" between the entire length of the Y axis rails? Not parallel. Or are you just saying that when you pull the X gantry all the way to the front there is a 0.27 degree non perpendicular?

Then it’s as I thought last night. You are saying that the gantry is on the blue line marked X axis. Yes it might be if you pull it all the way to the hard stops. I am saying that it will naturally find it’s way to the perpendicular (more like the line marked 39.37") once the V wheels are tight. Don’t pull it to the hard stops by the ends. Always position it by pulling it at the center and it should naturally find the perpendicular. On my X-Carve the belt clips and shrink tubing are in the way and will not allow you to reach the Y axis hard stop anyway. But go ahead and true it up. It’s just not all that relevant to the cut.

I cut up a couple of different butter dish type lids to use as shims. Different types of lids are different thicknesses. Play around until you find the best fit.

What I am trying poorly to say is I think he has case “A”. Not “B”. He is still assembling the X Carve. If he pulls the gantry by the right side all the way to the front stop then yes the Gantry will not be perpendicular. But the V wheels aren’t going to want to track out of line if adjusted properly so it will square up to case A. If the Y rails are parallel and the gantry tracks perpendicular then it doesn’t matter if one is longer than the other. Yes his waste board will be skewed but that doesn’t affect the cut. But sure, go ahead and make things square. 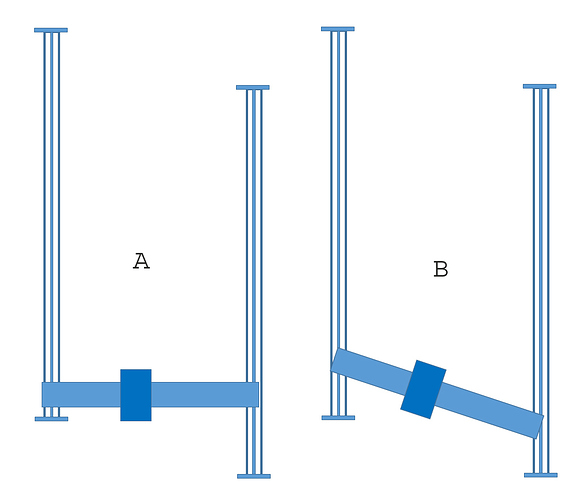 The bed is clearly out of square. Not arguing that.

Not what I intended when I said bed. Poor choice of words on my part. But my reasoning is all academic. You understand where I am coming from and I understand your situation. I’ll probably look a little closer at the alignment on mine because of this thread but my gantry is already perpendicular to the parallel Y rails so it’s not affecting my cuts. Let us know how you shim the frame.

The plastic will compress just slightly, not much though. So far it has held up perfectly. Just keep in mind that a small shim can have significant amount of adjustment from one side of the gantry to the other on a 1000mm rail.

You can also try aluminum foil and fold it, but it will be more likely to tear when things are tightened down.

Cardstock could also work, it will compress slightly though as well.

If the compression over the long haul concerns you, consider finding a Sheetmetal distributor and pick up a selection of different gauges. For the amount that you need, you could get away with scrap pieces from their shop if they are willing to give away their trash.

One mans trash is another mans treasure.

A word of advise. Check each side of the gantry, not just one and on front and back. On one side you may have to shim the front makerslide, whereas on the otherside you might need to shim the back makerslide. Some of the issue could be coming from how the ends were cut. So it might take this to balance it out. However, you may only need to shim one side or the other. Each machine might be slightly different, requiring different shims or no shims at all.

The key is to have the X makerslides perfectly perpendicular with Each of the X-plates which are parallel with the Ymakerslide. Just correcting one side may not alleviate the other, it could possibly cause binding in more severe cases.