Hello all! This is my first post. My wife gave me the option to buy a tool i dont need but want for christmas. Id like to get an xcarve but i dont know that id really use it for the price. But!! If i add the laser engraver (https://jtechphotonics.com/?page_id=3565) i could see me getting 2 tools for 2k and id be ok with that. One reason id like a laser is for egraving pistols (a few glocks) and for the price of getting it done, i can buy the laser myself. Also, ive been seeing people stipple the glocks via a laser (obviously more accurate than a handheld soldering iron to a noob like me) so i was wondering if anyone has had experiance using the xcarv with a laser engraver on firearms or if i should be looking at something else. From what ive read this laser cant cut steel(which is fine) but should be able to engrave it. Laser Stippling for GLOCK and Other Polymer Pistols -

So this is a thing. We have all seen all the stippling that is very popular on the GLOCK pistols, and has bled over into the rest of the polymer-framed handgun world. Stippling can be very functional and in some cases, a very aesthetically pleasing...

Again i dont have one yet and am deciding what route to go.

Thanks for any advice!!

I don’t think the J-Tech lasers have enough power to do this. The little reading I did on it seems to indicate you need a higher powered laser. The videos that I checked out were using somewhere between 30 and 75 watts.

The last time I checked the highest power laser J-Tech offers is 3.8 watts.

Thanka for the reply!

Ahh. I misread the power for “38” watts…not “3.8” so the laser (again dont know much) is really only good for wood an plastic.

What about modifying the grip on a polymer pistol? Would this be too weak? Im not quite sure how the software works but would it be able to create depth (add grip by making shallow circles) ie delay on a certain spot(hundreds of spots) for a period of time to melt the plastic to a certain depth? I know this might be trial and error as the laser doent know how long it needs to be in a certain spot. Or can it just refire onto the same spot multiple times?

Somthing like this? I realise that the laser only does one plane. I have the 3.8 watt laser at home and plan to engrave a Glock with it to see how well it works. when I try it I will post to let you see how it came out. and by the way I am worried that it will cut to deep and ruin the weapon but got to try or I will never know for sure,

The gen4s glocks come with extra backstraps. You could test on those. Thats my plan. You can buy extra if you dont have any. Also fyi glock will replace a ruined frame for 150. You send it to them and then removed the metal components and i stall them into a new lower receiver. 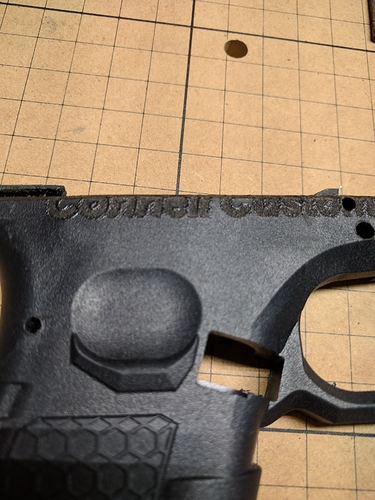 Wouldn’t it be posible to engrave it with cnc ?

Of course it would. I have done this on my AR which are aluminum. But this post was an experiment on how the 3.8 Jtech laser would do on a polymer frame for Stippling. but you could just as easily engrave with a V-bit.

How would u get the border lines fornthe pistol frame on a software?

not sure what you are asking.

but if you just want an outline of the frame you would just need to measure and draw to specs.

That’s my big question too. I am sure there is the images in actual size in software out there I just haven’t found it yet.