I’m using a 1/8" diown spiral bit on Baltic Birch plywood. As you can see in the image, the top and sides have a clean cut, but the bottom is a fuzz mess. Any tricks to address the bottom fuzz on plywood? I’m running with a Feedrate of 80 and setting of 1. 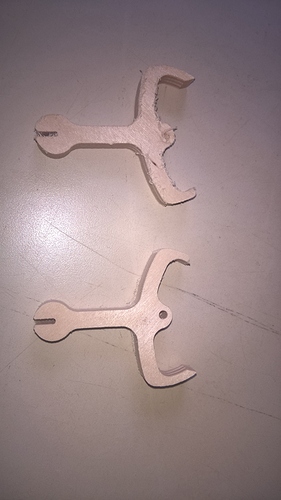 When I do stuff like that when it’s done I flip it over and sand it 220 while it’s still tabbed in that way it’s easier to deal with. Doesn’t take much sanding either . Or you could try a compression bit if you have the $$

I have had similar issues. I love the clean top cut of a downcut on plywood. (I also have less clamping issues as it doesn’t “lift” the work piece as it cuts.)
But I wanted to get rid of the underside fuzzies as well.

I got a 1/4 compression bit, also known as a up / down bit, which is supposed to address this. The bottom is a upcut, the top is a downcut with it “compressing” in the middle.
I have not really had a chance to try it out fully, but it seems to work as intended. The trick, I think, is you have to make the initial cut depth be deeper than the “down” part of the bit? Which, if memory serves is a little over 1/4 inch. Before I upgraded my X axis I would be hesitant to have that deep of a cut (I think I am doing 8mm?) But with my upgraded gantry it can handle it.

The problem I ran into is I use VCarve Pro and you set the MAX depth of cut for a bit, but there is no minimum. So it happened to be breaking up the carve into layers less than the 1/4" minimum. I have now figured out how to set the layer depths manual but have not tried it out with the proper settings yet.
But even with the wrong settings it worked pretty good. I was cutting some plastic deck composite. The first layer was too shallow so it cut like a standard up cut bit, with the normal strands left behind on the top. Then on subsequent passes as the down cut portion passed over the strands it cut them away. So I wound up having a relatively smooth cut on both sides.
There were still a little bit of strands on the bottom edge but significantly less than I had with the downcut bit.
I am not 100% sold on it yet, but it is definitely worth playing around with.

Thank you for all the replies. I have been sanding the bottom, thanks Adam. I didn’t know about compression bits. I do have a wasteboard, but have been reusing the wasteboard. Starting with a down cut bit and make the last pass with then up cut bit sounds like a good idea, I’ll give that a try. Thanks again to everyone’s response.