Can you describe the failure (what it did and didn’t do)?

Does this have anything to do with it?

What’s your situation concerning Reset/Abort (A0), Feed Hold (A1), and Cycle Start/Resume (A3)? Are those connected to anything?

The newer 1.0c from Inventables has Safety Door enabled which, I believe, needs to be pulled up/down or inverted or else an alarm state would happen?

The new Xcontroller has those buttons which would internally handle proper polarity and I think I’ve seen where LarryM has his connected to buttons but I could be wrong.

I don’t think that is the case for the Feed Hold/Safety Door as the whole point of a door switch would be opening the door would open the switch which would cause a trip.

This option causes the feed hold input to act as a safety door switch. A safety door, when triggered, immediately forces a feed hold and then safely de-energizes the machine. Resuming is blocked until the safety door is re-engaged. When it is, Grbl will re-energize the machine and then resume on the previous tool path, as if nothing happened.

Without scouring over the Xcontroller schematics (if they are even available), the feed hold button may actually be a normally closed circuit and pressing it causes it to open and so when you hit resume, it’s considered closed.

They are both momentary buttons. Resume is 1 button, Feed Hold is 1 button. I found the schematic and, without P/Ns, it appears that they are both normally open but no mention how they’re handled internally to the processor.

Just throwing it out there as a possibility as that is one difference in how 1.0c operates versus 0.9j and potentially a difference between gshield/arduino versus Xcontroller. 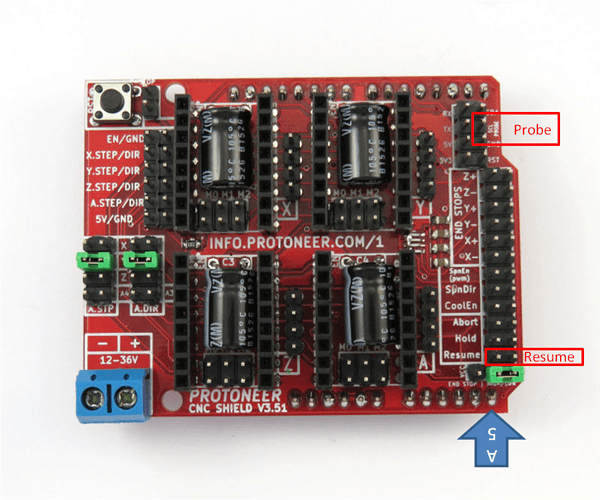