I have been experimenting with making edge light signs in some scraps of polycarbonate I have laying around. The issue I am having is that the upper half of the sign is noticeably dimmer than the lower half. Looking around on the internet at signs of this type I have seen this in a few pics but the majority of what I see does not appear to have the same problem. Has anyone else experienced this? I am using led from a cheap roll I had hiding in a box so I have wondered if its just that they are not bright enough. I am going to order some new led rolls but I thought I would seek advice before I did so.

Thanks for any wisdom you can impart. 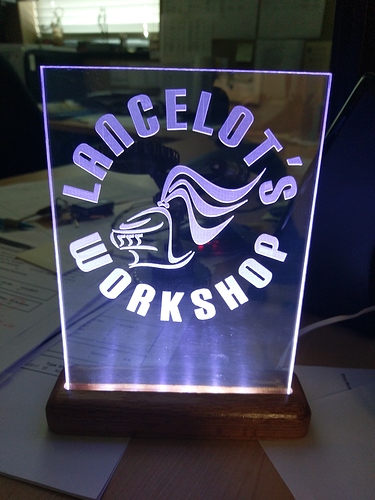 How deep are you engraving? I have heard a deep engrave will shadow those further away.
I don’t think that problem can be totally resolved when lighting from a single edge. Possible thicker material would do better. Also the quality of the material would have an effect.
We only look thru the thickness of the acrylic, but that light is going transvere to the farthest engrave. That maybe 6 inched or more so slight quality variation would reduce light transmission at those furthest points.

How deep are you engraving? I have heard a deep engrave will shadow those further away.

This.
Think etch rather than carve or engrave.

Neil it appears you are directing your reply to me. I understand edge lit and agree with your statement.
I was asking the OP how deep he was carving.

Hey @MarkA.Bachman. I was agreeing with you and trying to tell the OP that your assessment was the correct one.

Ok, thanks it just appeared different to me.

Lance, to add to what these guys are saying…

As the light travels up the inside of the acrylic sheet it will be blocked/diffused by the engravings. So a best practice is to make sure the engravings get deeper as you move away from the light source. Just set your artwork at slightly different cut depths (although the delta doesn’t need to be a whole lot).

Thanks for the relies guys! I’ll try what goose said and cut the upper portions a little deeper. I don’t have a reference as to how deep others are cutting these so I don’t know if I’m cutting too deep or not deep enough.