I need a lot of help!!! I’ve designed a gift in Fusion 360, and it’s kind of large (with complicated cuts- at least to me), so I divided it down in different files (the “extra bits”, the main section and the base…). I went through and divided the CAM settings for the “extra bits” file into 5 parts so it would post process into easel easier- Face, Bore, 2D Pocket, 2D Contour1, 2D Countour2. I ran the first 3 setups and I realized the bore holes weren’t going all the way through the plywood, and then the pockets were cutting too far to the left (even though in the design- everything was aligned correctly) and it was cut all the way through the wood, even though I thought I had made the cut only half way through the wood. When I started cutting the first contour setup, I realized that since it wasn’t cutting over top the pockets and it was inline where the pockets should’ve been, it was going to cause a collision, so I stopped that and moved on to the second contour cut- which was the outline of the pieces. I’m not sure how to fix these things in the CAM, and I don’t think I’ve explained this very well…! I’ve tried to include a screenshot to better picture the project- but it only comes up as blue text with no link attached… so if anyone can help with that too, I’ll gladly try and attach a picture.

Do you think it’s the CAM setup or something mechanical?
Can you share the Fusion project?
To upload a pic, press the little upload arrow.

Provided it isnt mechanical its in CAM, but without further details its hard to say…
As Neil suggest, if possible share the Fusion project, or show us some screenshots of each Setup/Toolpath.

So I’ve gone over the mechanical (I’m better with that then with the computer side of it- lol), and the mechanics is solid. I’ve tried the upload, but it just shows up as a blue link that doesn’t go anywhere…I’ll try again 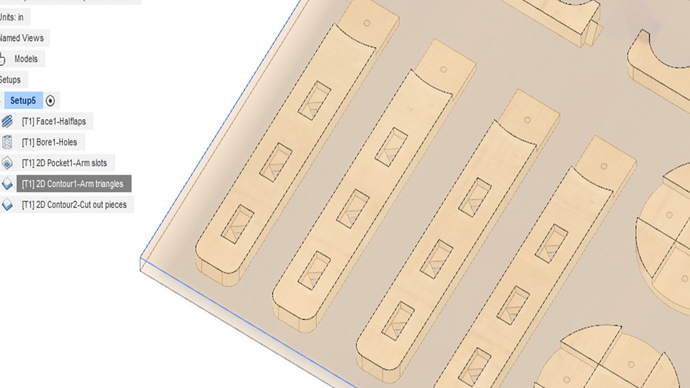 What’s the best way to share the Fusion project? Am I able to do it privately?