A few weeks ago my daughter broke one of the blades on the ceiling fan in her bedroom. Apparently she had decided to see if she could stop it with her arm and proceeded to stick said arm into the blades… 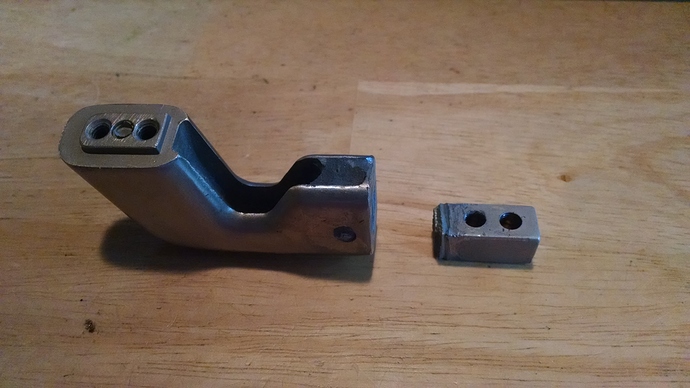 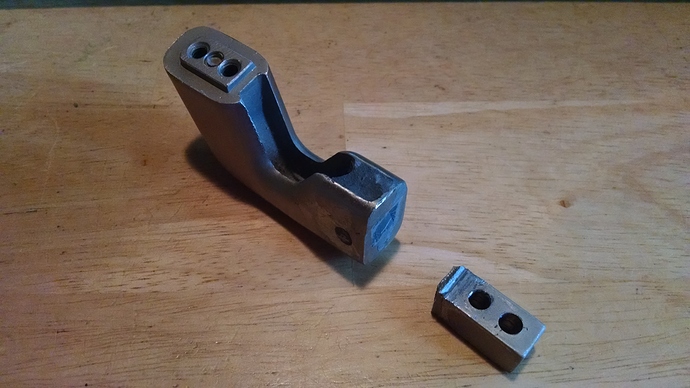 Attempts to locate a replacement part quickly hit a dead end. I dug up the installation manual for the fan and although there is a registration card that has a generic mail-in address in Texas, there is no phone number or other means of contacting the manufacturer directly. This is a Hampton Bay fan (made by Home Depot), and the Home Despot does sell replacement fan blade arms for their cheaper models but apparently I had splurged for the fancy model and these use a different and incompatible part design.

The next option was to attempt a repair. The part is cast in Aluminum, I tried re-attaching the broken piece with 2 part epoxy of several types but there was no success. The part is not only cheaply made, but also designed to break where it did in case an arm or a head find their way into the blades, minimizing damage to the body part while maximizing frustration and annoyance to the father who now has to fix it…

At this point unrequested suggestions began to flow in. Some people (I call those people my wife), offered that buying a new fan was the next logical step given the already sunk investment in time and the clear lack of positive results. But I refused to give into the idea of throwing away an otherwise perfectly working fan and argued that a larger investment had been made into a machine that makes parts and that this would indeed be the next logical step.

So, after looking at the part for a while I realized that it could be machined on my XC. Ideally I would make it from Aluminum or Brass but although I’ve cut metal on it, I don’t yet have the confidence and experience to machine something like this. What I did have was some left over hard Maple from a previous project. I figured it had the best chance of working. So I grabbed my trusty caliper and after a short time I had it drawn up in Fusion 360. 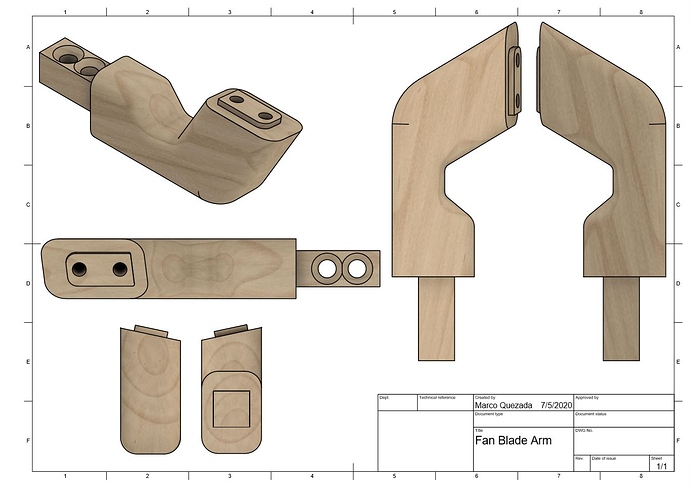 The part is not very complicated but it does have an angle face where it interfaces with the blade. 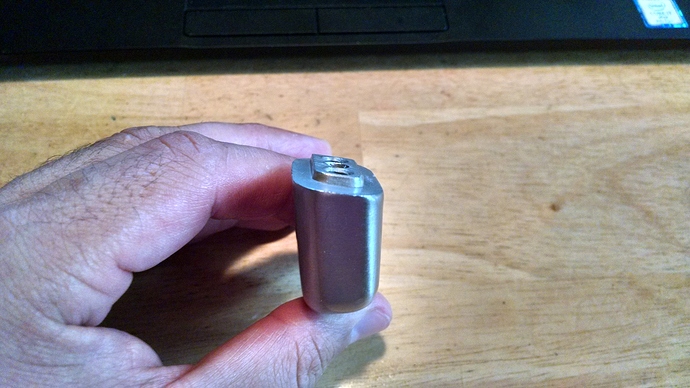 This is how the blade gets its twist to generate the air flow these fans are known for. The challenge went from a double sided carve to three sides where one is at an angle. Given my lack of access to a 4 axis machine, I decided to make a simple jig that would hold the stock at the correct angle in the opposite direction of the blade twist, so as to bring that face parallel with the cutting plane of the XC. I grabbed the Maple board and after a bit of fiddling with the circular saw I had the two parts that I needed to make the jig. 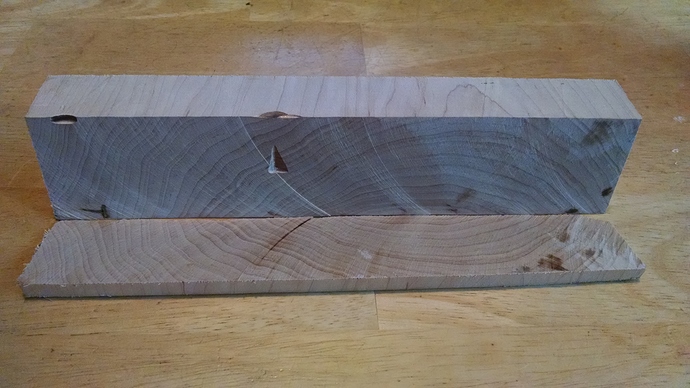 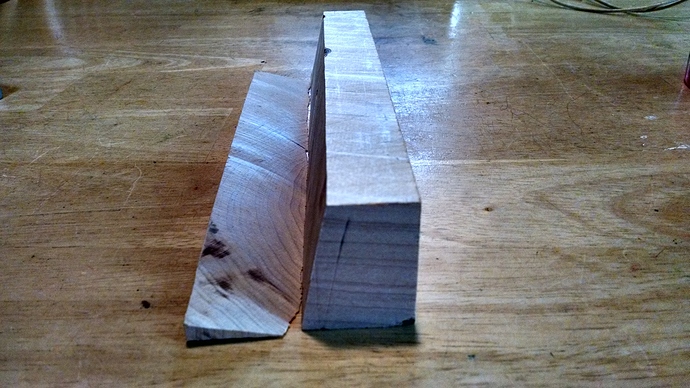 So after placing the jig on the wasteboard and the stock on the jig I was able to cut that face. 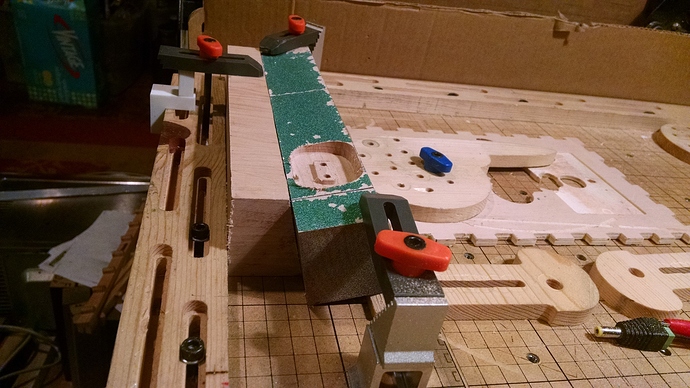 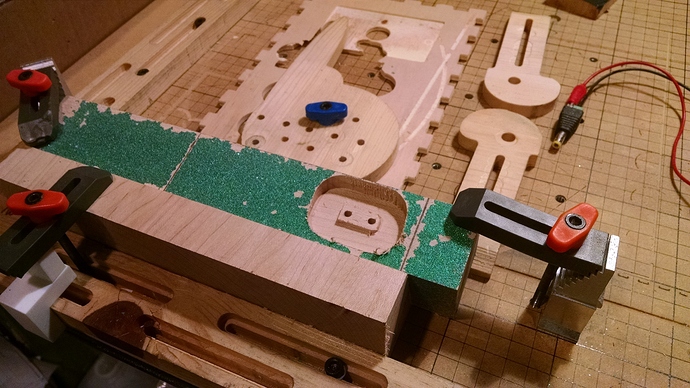 The rest of the work was a matter of rotating the stock 3 times to remove the material needed to shape the part. 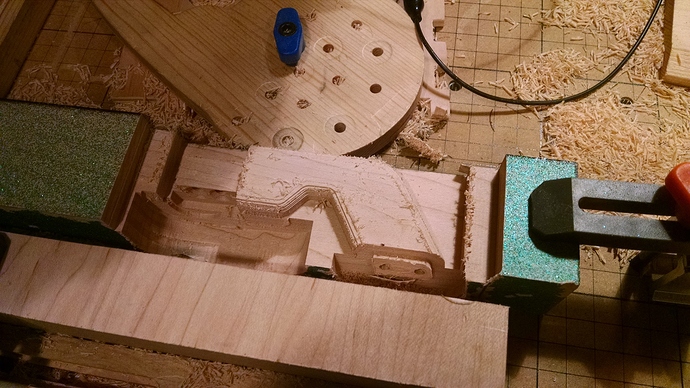 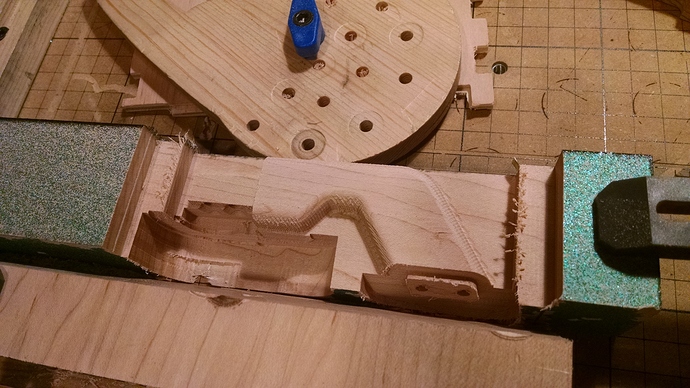 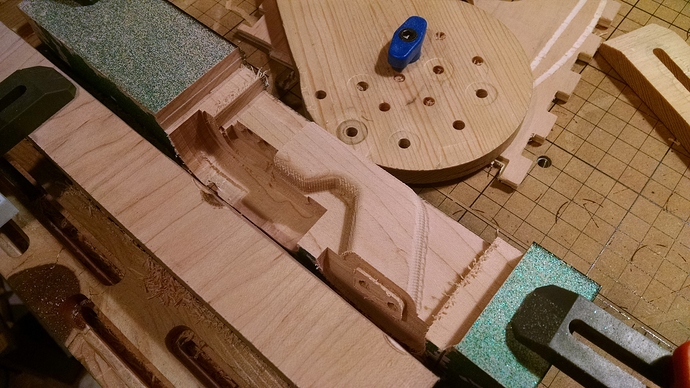 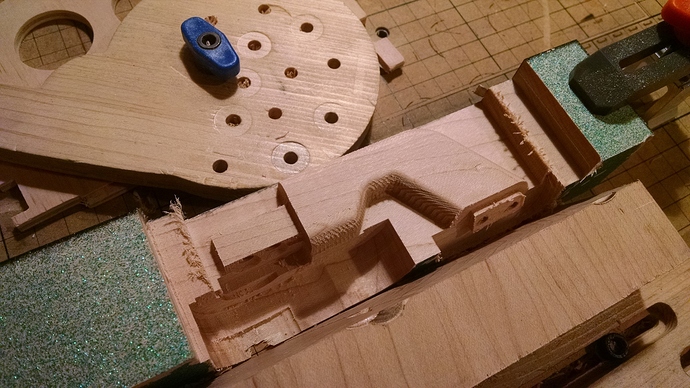 Clearly the biggest challenge is making sure the indexing and measurement of the stock are accurate. 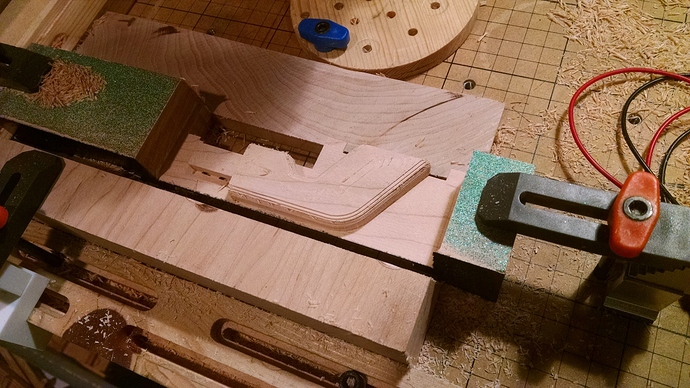 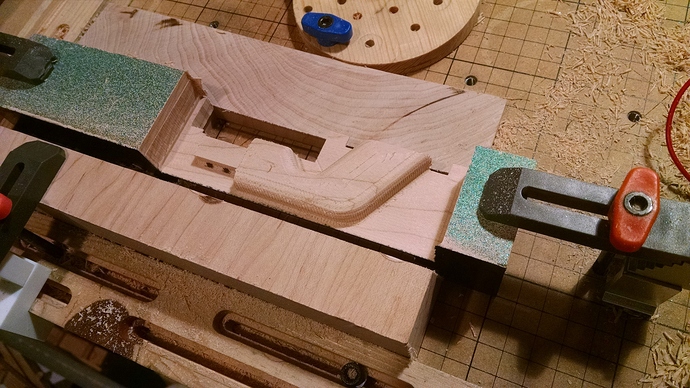 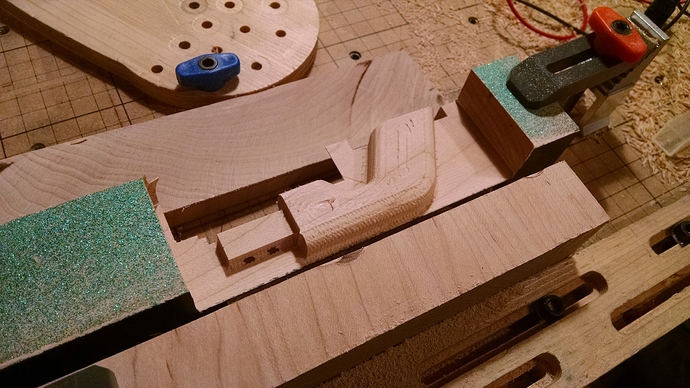 I say clearly because I failed to measure the stock correctly and was off by a small amount and the part ended up a bit skewed and not mirrored. But I’m not making batches and the skew was within tolerance and the parts fit and this is not even government work. Nothing a bit of sanding couldn’t improve. 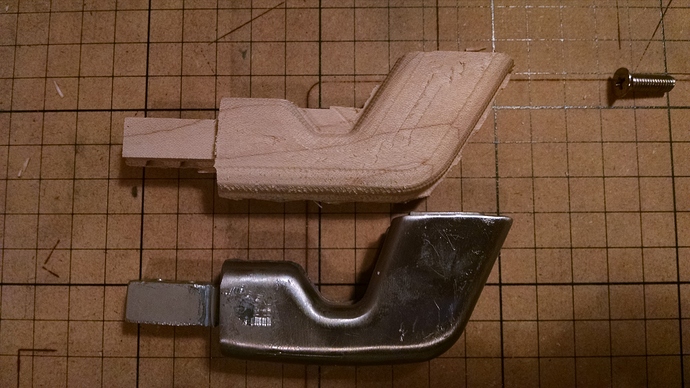 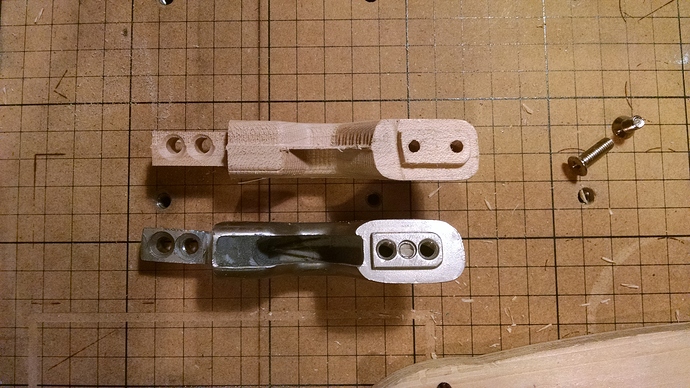 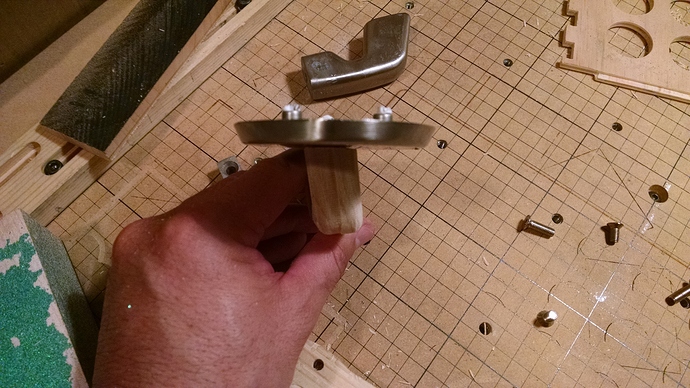 Now that I had what seemed like a respectable copy of the original it was time to see if it would even work. I mean the joint where the original broke has not fillet or any other feature that can avoid focusing the load stress at that point on the part, I believe this is by design as mentioned earlier. I was worried the Maple wouldn’t be able to handle the stress. The wooden part came out with a fillet because of the nature of the machining, so I had that going for me. But the way the part mounts actually does not allow clearance for any extra support of the joint.

In any case, I verified that the mounting holes lined up correctly on the hub and proceeded to attach the blade. Once that was done I performed a very unscientific stress test before committing to final assembly. 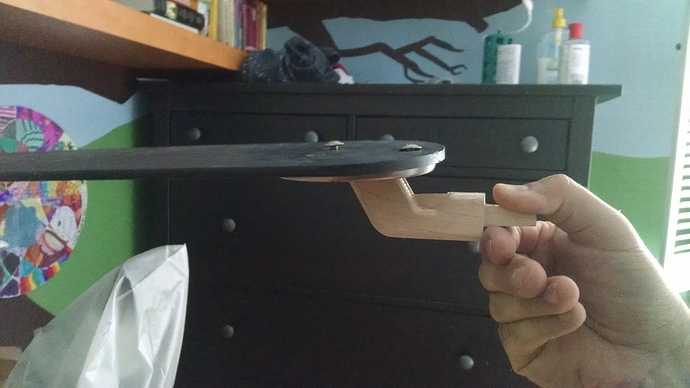 It did not flinch, so on it went. 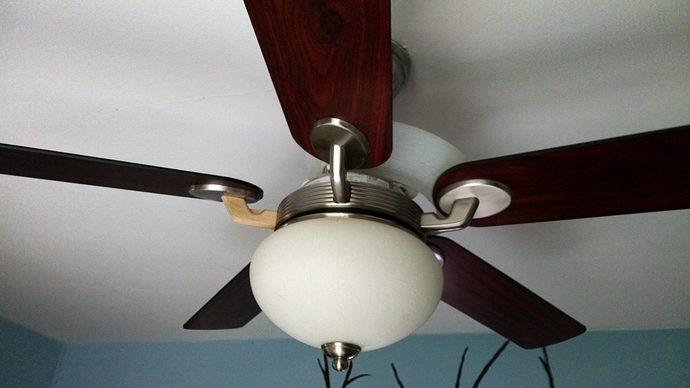 It fit in well and looks like a match. I think if it was painted silver it would not stand out, but I am not that committed, and it serves as a reminder of the events that brought us to this point.

Time to take it for its first flight:

It works! At least for now and until I pack up my tools and leave.

There is now a slight wobble in the fan given that the weight of the wooden part is lower than the original and the inertia changed. A balancing kit can take care of it. Some day, if someone cares.

In the end it was very satisfying to see the part emerge from a blank piece of wood especially since it was cut using a 3 axis machine. It allowed me to save the hassle and cost of replacing a ceiling fan and I learned a little more about the details I need to keep in mind when doing parts that require rotating the stock.

Very well done and the story was great.

I love hearing stories like this of practical uses of the machine!

Thanks. This is one of those projects that I did not ask for and had been weighing on me for the past few weeks. I was so pleased with how well the part came out that I needed to tell others :).

Now that you have a valid sized part, you should make a mold and cast in resin or aluminum, you’ve done the hardest part. Awesome indeed!

That’s a good point. I was also thinking of spraying or dipping it into some sort of adhesive that would create a hard shell around it by doing several coats.

True, I could switch them out :). I’d like to believe that we all learnt our lesson here but knowing my teenage daughter it’s possible this will happen on its own.

In order to avoid such situations, I try to hide such engineering stuff from my kids

If I were you, I would probably not spend so much time fixing it. Instead, I recommend you buy the new ones on Toggle Clamps - Horizontal - Vertical - Push-Pull - Latch - Heavy Duty Toogle Clamps - Custom Toggle Clamps - Sandfield Engineering. This company is really great in terms of tiny tools for engineering and they helped my company to save a lot of money on toggle clamps. In addition, they provide customers with huge discounts at the end of the summer period. I suppose they can replace the tool you are looking for.

Interesting feedback, thank you. However the clamping was not really an issue in this project as I recall.