I am a SO1 upgrader, got everything set up and working. Did a test cut on a piece of scrap pine and everything seemed fine. Put a piece of scrap Purpleheart, cut speed of 45 in/mm, and a depth of .038mm. I’m also using NEMA17 motors, a dewalt 611 with a 1/8 spiral upcut bit. The first 2-3 passes were fine, awesome. Then it went off track about 3mm after a long Y movement. Then it just went all haywire and I had to shut it off. The POT is at about halfway on the all the axis’s and I don’t think it was a belt issue, had those, fixed it up, electrical tape is my friend. I’ve got my fan on the grbl shield and some copper heat sinks stuck to the chips with the fan blowing down.

Purpleheart is a VERY hard wood so make sure you take that into account. I have a bunch of it that I do some projects with and even my radial arm saw doesn’t like to cut it.

Take several shallow cuts to mill purpleheart. If you normally use pine cut your depth of cuts in third for this stuff.

I think 45 in/mm, and a depth of .038mm is a little too aggressive for purple heart. I do 25in and .02 with black walnut.
Make sure you are wearing dust protection with that wood. It is a serious irritant .

The Dewalt spreadsheet I posted just recommends what RPM and feedrate will give you an optimal chipload. The chipload is just one of many variables you need to consider. The main variable is what mechanical limits the machine has. I would consider 100 ipm to fast a feedrate for hard wood. So you have to make some compromises. You can either use a smaller diameter bit, take a shallower cut, or just set the RPM as low as the Dewalt will let you and run a safe 50 or 60 ipm and just accept that the chip load is not as good as it could be.

The main thing to understand from the spreadsheet is that a low RPM setting on the Dewalt is still very fast for a spindle. Most people at first (me included) thought that when things are going bad, the best thing to do is just increase the RPM and the awesome power of the Dewalt would fix everything. When really what you should be doing is reducing the RPM and making other adjustments

One thing to take into consideration is the number of flutes. If your machine cannot achieve a high enough feed rate to keep up with your spindle (as seems to be the case with the X-Carve with a DNP611) then you can simulate lower RPMs by using less flutes. If you’re using a two-flute end mill you can effectively ‘halve’ your RPM by only giving each revolution one cutting edge to work with by going from a two flute to a single flute.

Feed rates are calculated as the product of the chip load for a given material type, the RPMs, and the number of flutes. So you can easily see how this relationship is affected greatly just by what cutter you are using.

So, hopefully your problem is that you’re using a two flute cutter, because then going down to a single flute will probably resolve your situation.

Whoa, you all are awesome. I thought I would just get one comment back, this is great.

@ErikJenkins Yeah my table saw hates purple heart too. Pine was just the first tribute to the xcarve I had laying around. Trying to use the xcarve to clear up some scrap wood that I can’t safely put through anything else.

@JDM Sounds right, I’ll try it at that speed and leave it alone. I really hate watching it, so I might just setup a web cam and gopro to record any issues. I have a full face mask and am working to hook up my dust collector to it and it has a 5 micron filter on it, or just use my shop vac, haven’t figured out which is better or which one I want to sacrafice the bearings on for the runtime.

@AllenMassey guilty, totally bumped up the speed. I’ll keep it low and bring the depth per cut down.

@CharlesVanNoland I think in my CNC Mill kit there is a single flute, I might have to check when I get home.

I’ll report back when I find out after I run the purple heart through my planer to remove all the current markings.

Latest update, next attempt got a lot further. Went with the 25 in/min, and a depth cut of 0.015in per pass and a 611 speed of 1. It really did make it further but it managed to get hung up at some point. The v-wheels had issues due to the dust and stopped rolling as well, and one belt managed to work itself loose on the Y axis (forward/backward). Going to attempt to redo those belts, again. 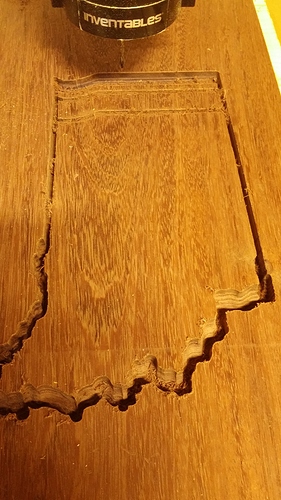 Yes, before taking ANY of this feeds and speeds advice, get your belts fastened and TIGHT. Tighten up your v-wheels and put blue loc tite on teh nuts. Recheck everything before you cut. If you lose steps (like you clearly are in this photo), nothing is going to help you but to make your machine more stable and sound. The belts should twang like a guitar string. The v-wheels should be difficult to turn. dust on your v-wheels will not stop them rolling if they are adjusted properly. This might take some time to get right but it pays off. I have not had to tighten or adjust my machine in a couple months because everything is locked down. And I am cutting hardwoods like walnut and canary at .1" doc and 40 ipm with no problem. (but I did the stiffening mods).

Make sure you review the belt section on securing with wire ties. Not doing that step caused me a ton of grief early on.

@Earwigger I thought I had them tight, looks like I was wrong. The dust on the vwheels made the whole machine jerk when it bounced over it. It was caked on and then compressed. Had to use my fingernails to get it off the rail. I also used nylon lock washers on everything. Looking into the stiffening mods now too.

@JDM I used electrical tape, watched a youtube video last night that also told me I did it all wrong. The sparkfun SO3 puts the belts under, over, under while the xcarve instructions suggest over, under over which leaves the wire ties as the only belt on belt support. I might switch and do both, the S03 way and the zip tie.

This may be me, but I always over tighten guitar strings, and I don’t play guitar. On car belts, they are tightened and measured based on deflection in inches, or used to be the last time I changed a belt. But that is me, that description works well for everyone, but me.

I know the feeling. I just built a second machine and did everything I just suggested. I cut one perfect aluminum circle. The second was an oval. Belts are loose, one v-wheel is loose and I am losing steps on my z-axis which is disastrous when milling aluminum. I just shut it down and have a list of things to do after the holidays:

Then try again. It’s probably a full day of work. But I know I will be glad I did it. I just don’t have the time until after the holidays!