I have made a couple of edge lit signs now and have found that the part of the sign furthest from the LEDs is of course not as bright.

Has anybody considered or tried cutting slightly deeper the further you get from the light to allow a more even effect?

I think maybe start at 0.01 inch doc and create a tapered pocket to say 0.02 inch at the other end?

That is an interesting concept and I would certainly like to see the outcome.
From what I have read, most people on here cut about .010 deep.
I have only made 2 signs so far and I cut .035 deep.
I think it gives 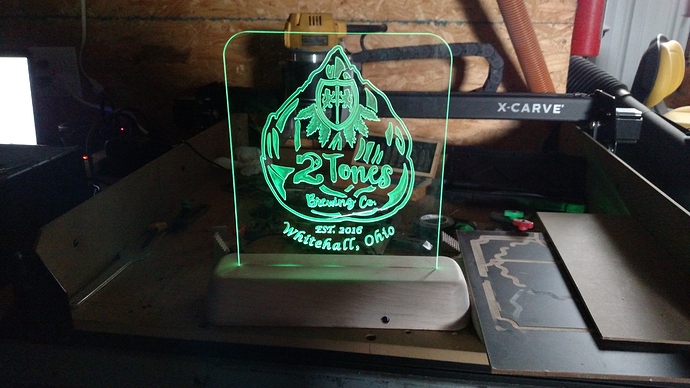 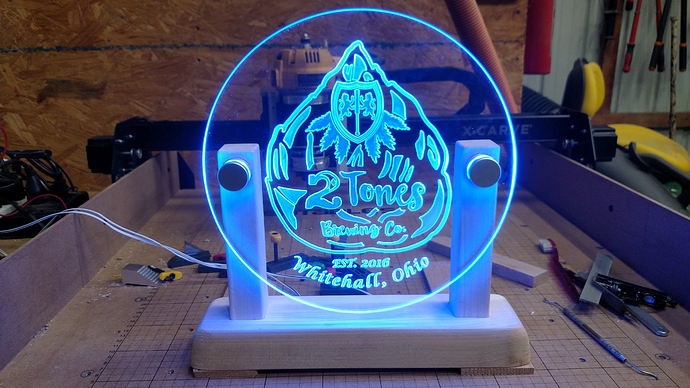 I’ve spent some time working with leds. As you may know it comes down to the amount of power being applied. As battery power drops off so will brightness starting at the end furthest from the power source. With leds you want to be one step up on amps available so your not starting out with just the minimal power.

Single, RGB and directional leds require specific amps per led. You’ll find the amps per led by Googling the type of led your using. That should help to figure out how many amps the 12v power supply needs to be. I’ve not worked with anything other than 12v leds. They sure do add an element of “cool” to any project.

I was just thinking with light travelling in a straight line that giving it a little bit more surface area to hit might help but I guess the drop off due to distance would far ourweigh this.

It may help a little, but the issue at play is is the light fall off. Light falls off because of a property called the inverse square law.

The inverse-square law, in physics, is any physical law stating that a specified physical quantity or intensity is inversely proportional to the square of the distance from the source of that physical quantity. The fundamental cause for this can be understood as geometric dilution corresponding to point-source radiation into three-dimensional space. Radar energy expands during both the signal transmission and also on the reflected return, so the inverse square for both paths means that the radar...


I design and fabricate led lit signs for a living. Think more about ways to light the sign from multiple directions or increasing the lumens per linear foot of your strips
1 Like
SHubb February 23, 2017, 11:31pm #8

I’ve used 8 AA batteries to power a portable sign I made for an inlaws business. I made 3 trimmed/soldered RGB strips to make an arrow -> about 30" total length. Worked great. If I had access to an outlet I would have used a 1 or 2 amp 12v plug in. eBay power supplies from China work but you won’t find a UL marking on them, which makes me nervous.

Also, if you purchase individual led diodes you can power them with around 5v but I didn’t go down that path yet. Once I get this xcarve controller plan to make a few led project I’ll share.

Hello Doug, I’ve never made an enclosed sign (yet). Are there better options than led strip? I’m not an electrician but found led strip easy enough to learn and work with.

Depends on your overall design requirements. Led strips are the go to for sure but led modules are functionally similar might be better for some applications. There are dozens of options with led strips alone. Are you thinking about this with the intent of selling? If so look for lights with a warranty. Its worth the extra money. We’ve used both of these guys. Maxbrights are high end but if at absolutely has to work they’re the ticket.
https://www.maxbriteled.com
https://www.superbrightleds.com

If I can find someone to buy - I’m selling

. I literally picked leds up in China. There is a real issue with quality and sometimes good enough isn’t good enough. Especially if you’re selling them. I’ve never made a dime on leds. I’ve cut, soldered and hung well over 200’. My friends love them. 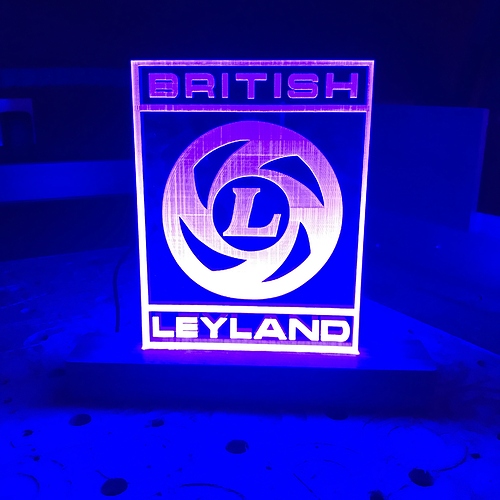 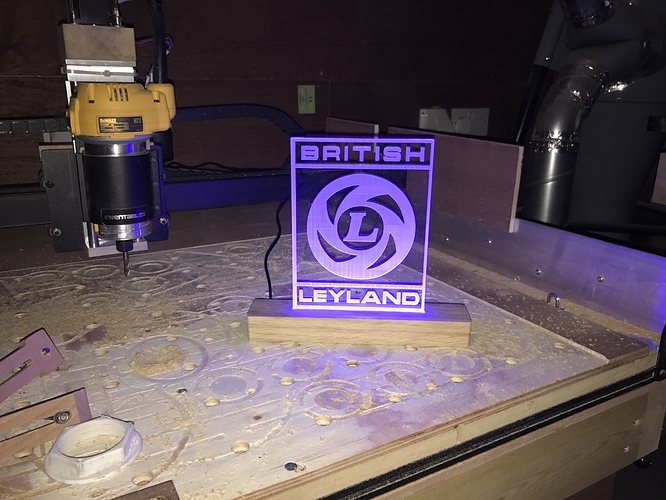 pretty pleased with the result, this is with flat 0.25 mm doc 30 degree carbide bit with the tip broken off

Audi, but my father worked at british leyland for many years in our home town.

Very nice! My parents had a Rover 3500 when I was growing up. What a car for its time!
Beautiful sign too.

Where do you get your LED standoffs?

google “Outwater Industries”
They come in Blue, Green, and White.
I am VERY pleased with them.
If you need any more info give me a shout, I will check the packing slip and get you the part numbers.

If you could send me some info on these. I would be interested in checking a little further. Have a few projects with acrylic wanting to try.